The ROG Zephyrus line has always been one of the most interesting gaming machines in the market. So it’s amazing to see these laptops pack large screens, secondary screens, powerful CPUs and GPUs, LEDs on the lid, and other features in a slim package. This time, the ROG Zephyrus S17 (GX703) offers something else — a lifting keyboard with optical mechanical switches. 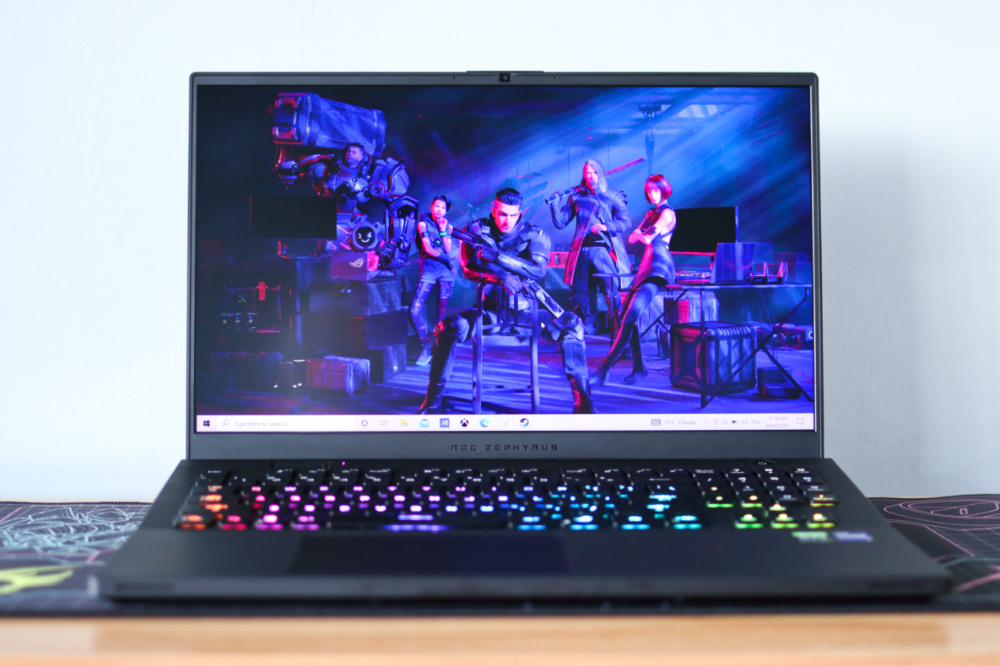 We have used the word “solid” before to describe laptops. But we’re going to use it again on the ROG Zephyrus S17 (GX703) but with a bit more emphasis because this thing is actually solid, thanks to the magnesium-aluminum body. Compared to other laptops with plastic bodies that easily flex and feel cheap, this one is very sturdy and feels cold to the touch. 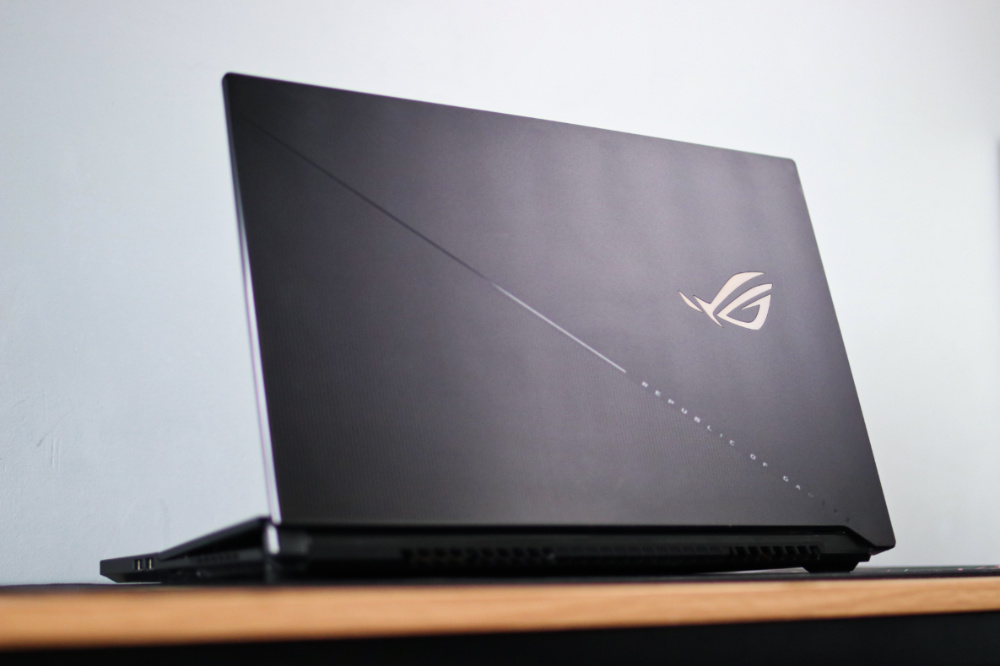 It also has diamond-cut edges, a Dot Insight pattern, and laser-polished accents on the lid to give it a stealthy look. It’s not totally metal, though, as the panel underneath is plastic, so it’s easily removable should you need to access the internals. It’s pretty slim at 1.99cm but heavy at 2.60kg. Add to that the huge brick of a charger, so you’ll definitely feel that when you put it in your backpack. 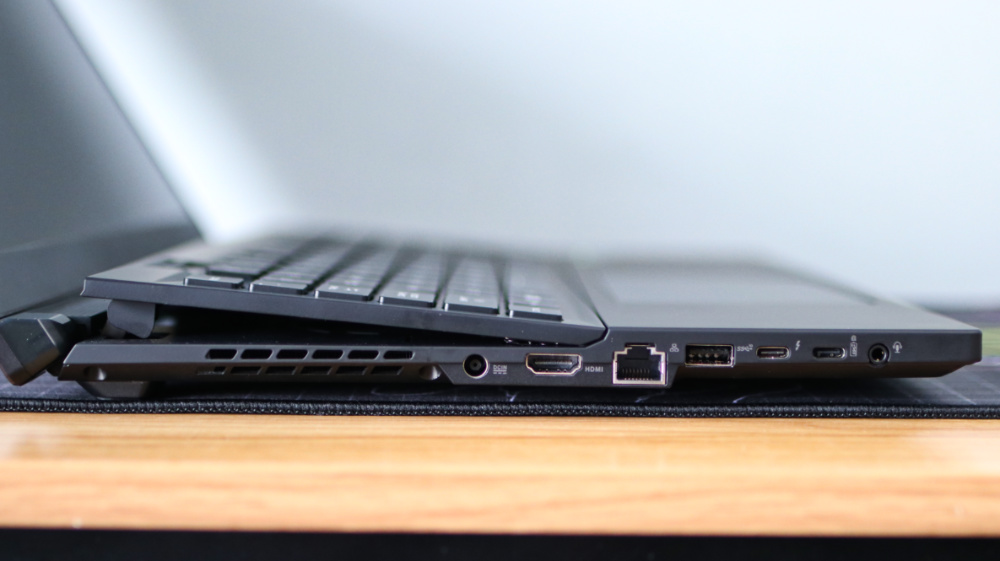 We have two USB 3.2 Gen2 Type-A, SD Card reader, and another vent on the right. 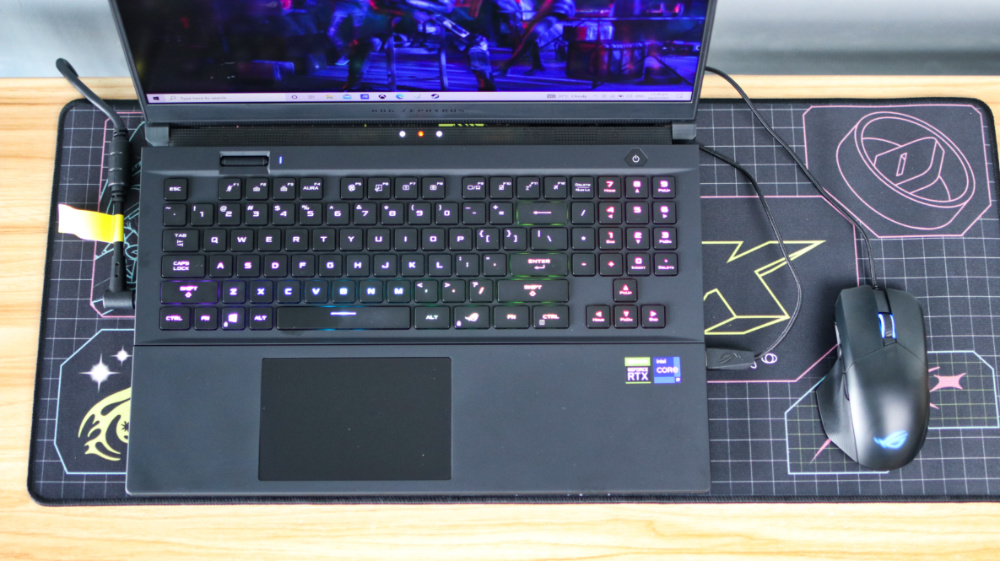 The positioning of the ports is a bit weird, though. Since they’re are placed down in the same row of the trackpad, the wires of your peripherals stick out. It becomes distracting and can get in the way of, let’s say, your mouse and other things you might want to put beside your laptop. On the front are two tweeters, while underneath is the rubber feet and a pair of force-canceling woofers, just below the palm rest. At the back are more vents. No ports here. Open the lid, and the 17-inch screen will greet you with slim top and side bezels. Found above it are the webcam and microphones with support for advanced noise reduction. Below it is the power button, keyboard, the configurable multi-wheel, and large and smooth trackpad. 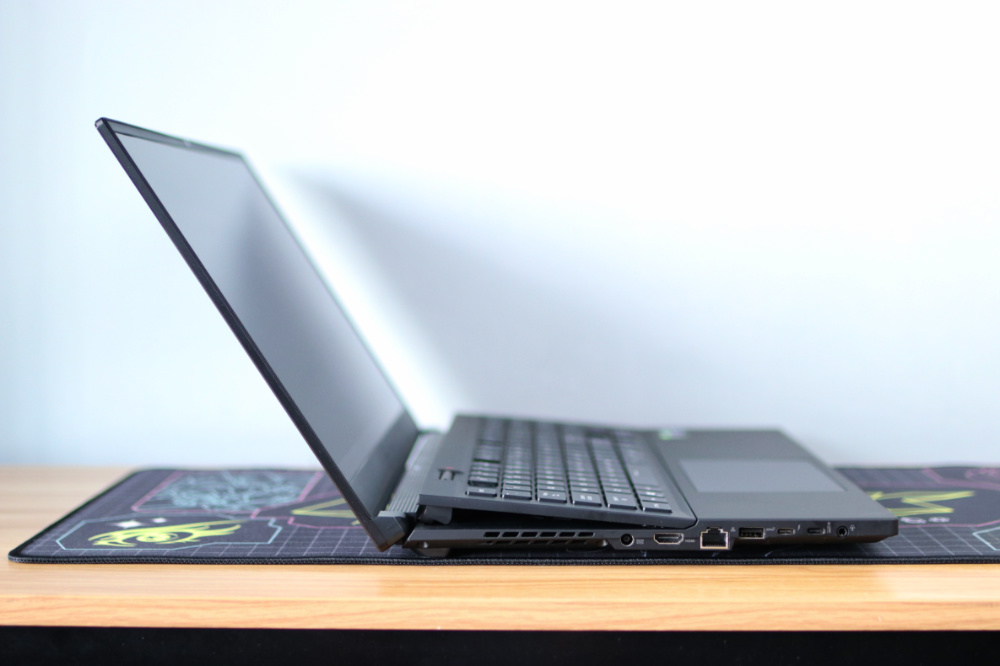 At this point, you will notice the whole keyboard lift, just like on the Zephyrus Duo 15. The lift is not as high, though, and has a maximum angle of 5-degrees. It serves two purposes, for better ergonomics when typing and improves cooling. It’s a sturdy mechanism and doesn’t flex even if you press hard on the keys. The keys follow a desktop-like layout with per-key RGB that supports ASUS Aura Sync. The keys use optical, mechanical switches with a travel distance of 1.9mm, while the keycaps are 0.15mm thick. The typing experience would feel weird at first, especially if you’re used to the typical laptop and mechanical keyboards. However, it’s clicky with a soft bump when you bottom out. It produces more noise than your typical laptop keyboard but more quiet than a mechanical keyboard with blue switches. I find the typing experience better than the usual laptop keyboard as it has more tactility and travel. 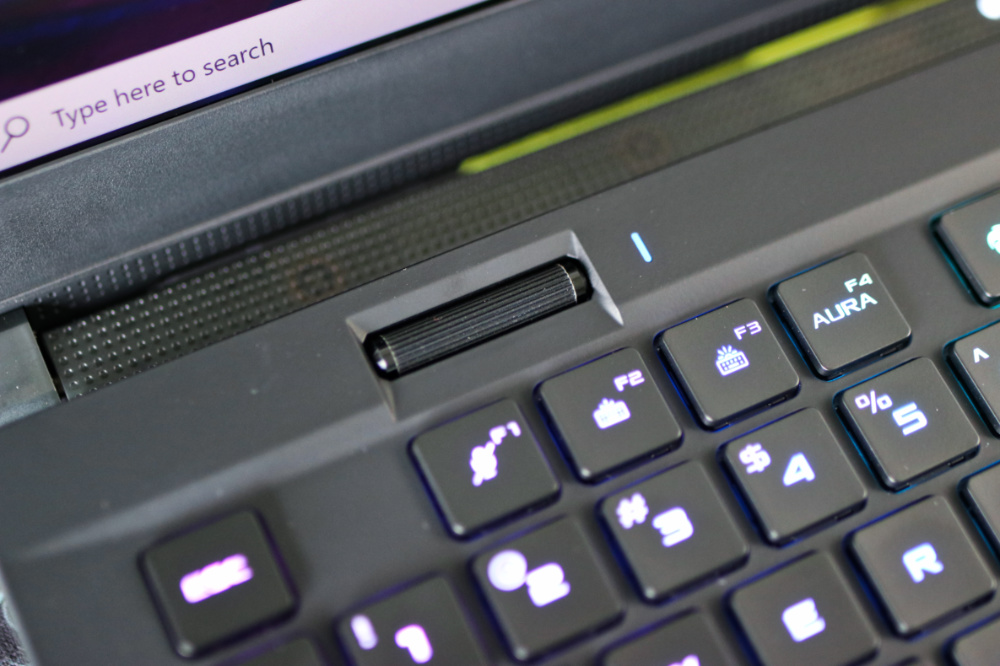 For the multi-wheel, it’s basically a wide, programmable scroll wheel with 7 presets. Just click and hold to reveal the options you can control: volume, display brightness, vertical scrolling, microphone, keyboard backlight, Task Switcher, and HyperFan mode. It’s a handy feature if you feel limited with what your mouse scroll wheel can do. I prefer using it for Task Switcher, so we don’t have to Alt-Tab between windows.

What we’re looking at is a 17-inch 4K UHD (3840 x 2160) IPS anti-glare display with 100% DCI-P3, Pantone-validated, and has a smooth 120Hz refresh rate. It’s a great screen that can be very bright and produce rich and accurate colors. In addition, it looks immersive despite the thick bottom bezel. 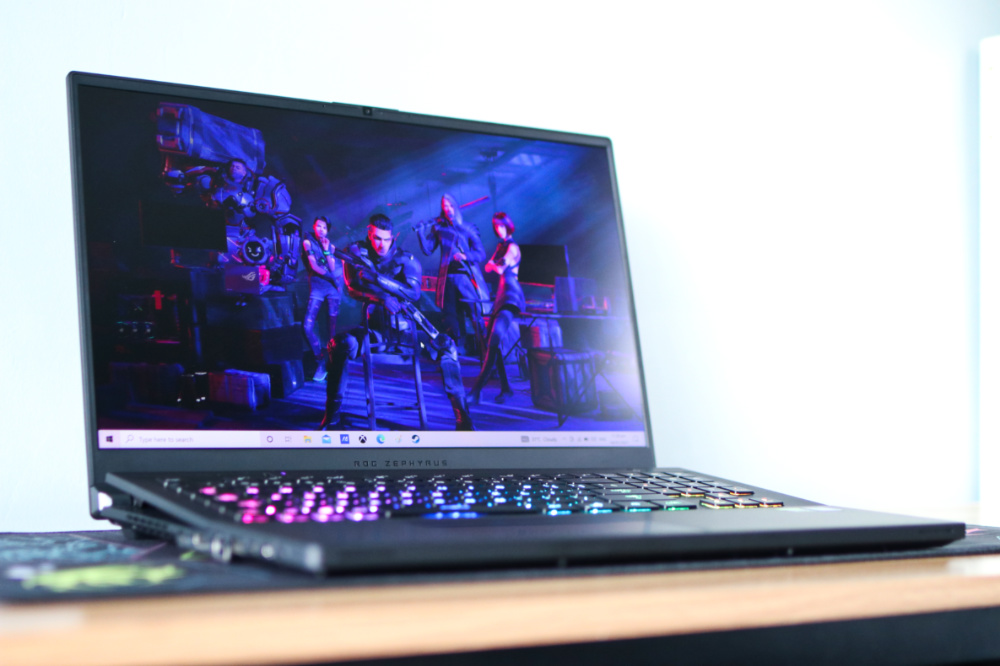 The sound quality is also amazing, thanks to the two tweeters and four woofers. It provides clear and crisp mids and highs and decent lows. It’s good in providing stereo sound and becomes more immersive when you activate Dolby Atmos. So far, we liked how it produced the sounds when we’re on a Zoom call, watching a movie, streaming music, or playing games. But if you want powerful audio, we still recommend using good external speakers or gaming headsets.

Powering the ROG Zephyrus S17 is Windows 10 Home and comes with pre-installed software like McAfee, Dolby Access, and Microsoft 365. The rest are standard ASUS apps like MyASUS, Armoury Crate, and Aura Creator.

The Armoury Crate is standard for ROG laptops, so if you’ve used a ROG laptop before, the interface is just the same but with some additional controls depending on the laptop’s features. Here you can see the Zephyrus S17’s stats, including CPU and GPU frequency and usage, temperature, RAM and storage consumption, and CPU and GPU fan speeds.

Performance modes are also available here, allowing you to switch to the standard Windows profiles or select between Silent, Performance, Turbo, and Manual. If you want to tweak your lighting effects and supported peripherals, there’s AURA Sync. There’s GameVisual as well, so you can select the appropriate display tweak based on your usage. You can even color calibrate the display from here.

Dive further inside the Armoury Crate settings, and you’ll be able to free up memory, toggle iGPU mode to extend battery life, customize Multiwheel functions, further adjust lighting effects, and activate microphone modes as well as its two-way AI Noise Cancellation, which is handy if you need to take a Zoom call.

The Zephyrus S17 model we have is the GX703HS-KF004TS, a top-of-the-line model with an Intel Core i9-11900H CPU, NVIDIA GeForce RTX 3080 16GB GDDR6, 32GB of RAM, and 3TB of SSD. It’s a powerful configuration capable of handling demanding games and creative applications. Check out the benchmark scores below: 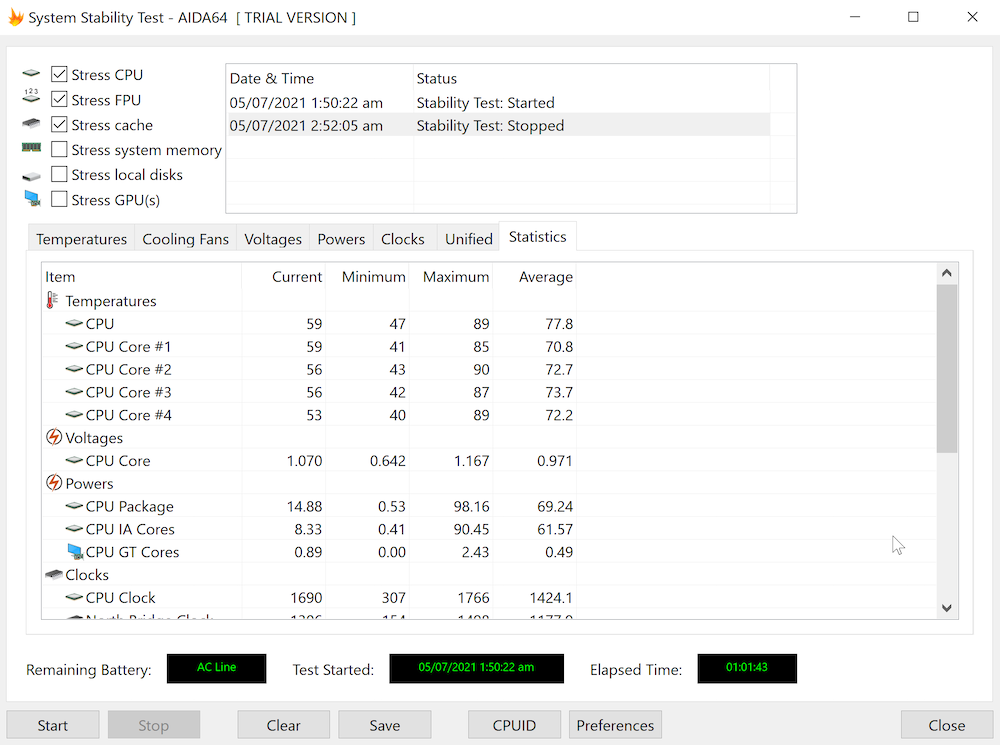 When it comes to temperature, we got an idle temp of 53-degrees C. When placed under AIDA64’s stability test for an hour, we got a maximum recorded temp of 90-degrees C and a maximum average of 77.8-degrees C. That’s cooler than, let’s say, the TUF Dash F15 we recently reviewed. This shows that its AAS Plus cooling and 12mm air intake do a good job keeping temperatures low. 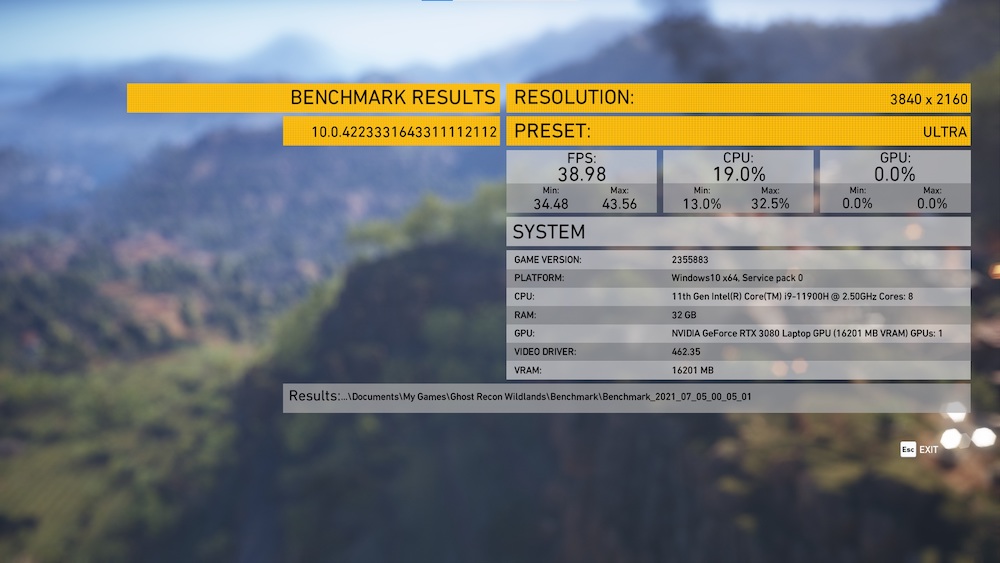 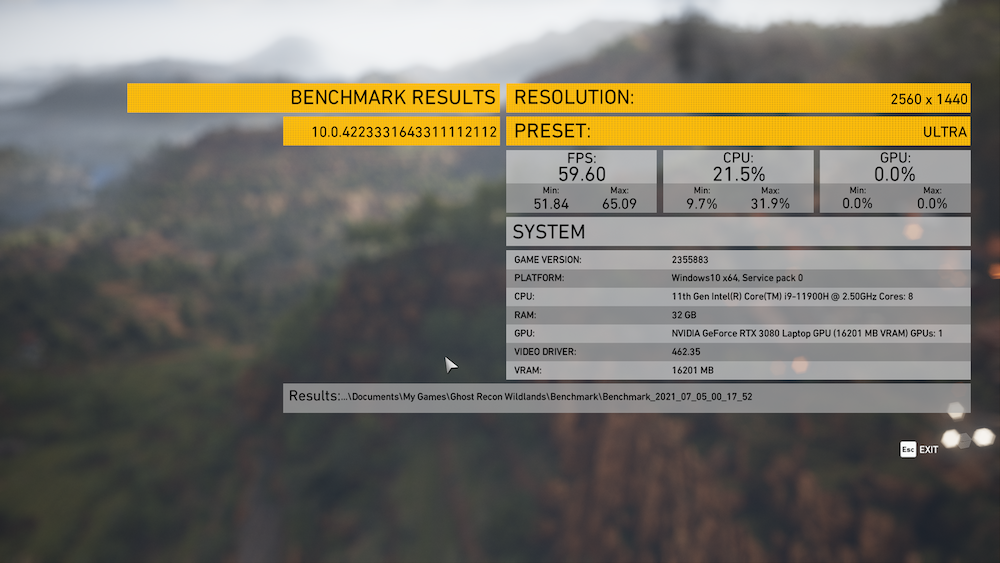 When running demanding titles, we saw it push 38.98 FPS on Ghost Recon: Wildlands at Ultra settings in UHD resolution. However, we got better frame rates at 59.60 FPS when we lowered the resolution to QHD. 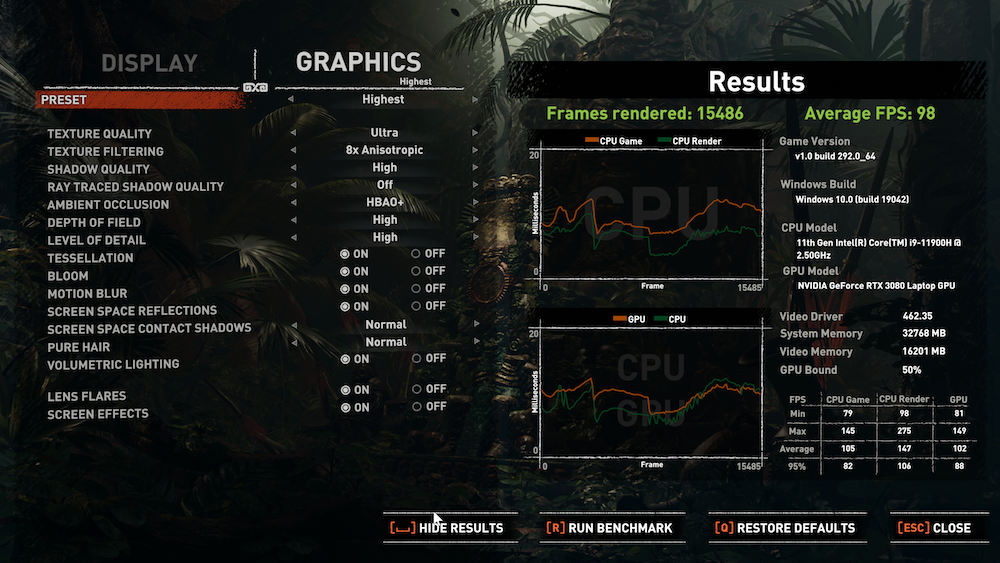 On Shadow of the Tomb Raider, we got 56 FPS in its highest settings in UHD and 98 FPS in QHD. 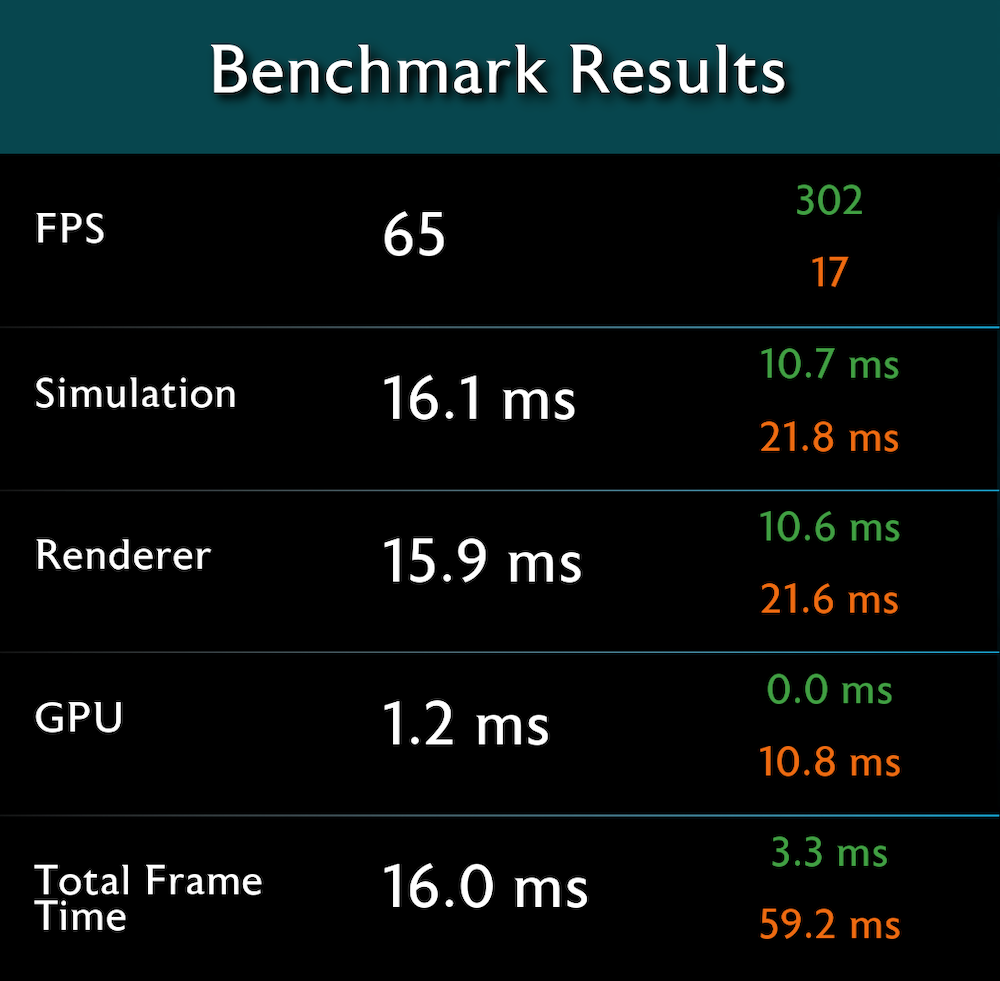 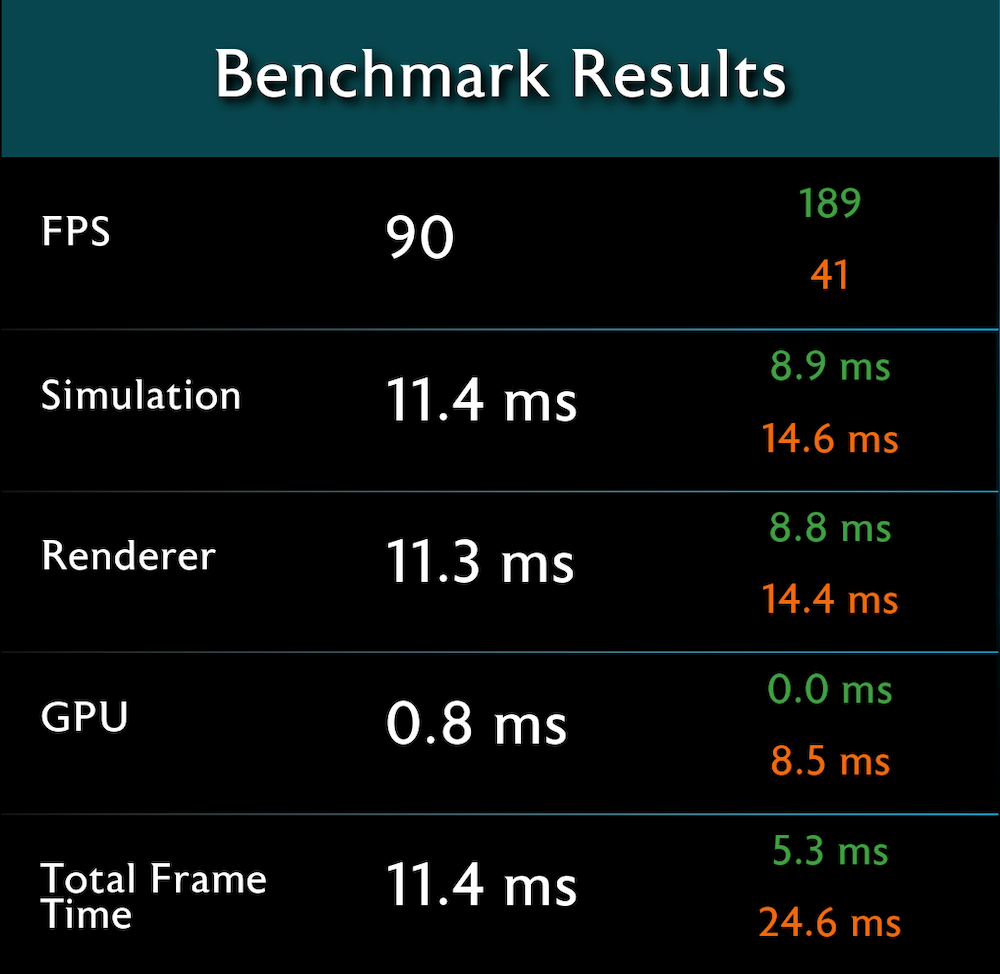 In Middle Earth: Shadow of Mordor, we got 65 FPS in Ultra settings in UHD resolution and 90 FPS in QHD.

Based on these numbers, we can say that the Zephyrus S17 is powerful enough to push decent frame rates in games in their highest graphics settings in maximum screen resolution. But if you want to get more than 60 FPS, we recommend playing at a lower QHD or even FHD.

As mentioned earlier, the Zephyrus S17 is well-equipped with ports to accommodate essential wired connections. For wireless, it has WiFi 6 and Bluetooth 5.2.

Battery-wise, it has a large 90Wh capacity with support for fast charging (50% in 30 minutes). It also supports 100W USB Type-C charging, while the charging brick that comes in the package has a 280W output. As for the battery life, we ran our usual video loop test, and we got 6 hours and 30 minutes of playback in better battery mode.

The ASUS ROG Zephyrus S17, especially this model, is the most powerful offering in the company’s latest line of gaming laptops powered by Intel 11th-gen CPUs. The last ROG Zephyrus that blew us away was the Zephyrus Duo 15 with its secondary screen. In the case of the S17, the company makes that second attempt by equipping it with a keyboard with optical mechanical switches. This is good news if you’re a user that likes these kinds of switches. However, some users might not appreciate it, especially those already used to using their own mechanical keyboards. The multi-wheel, on the other hand, is more for convenience. Good to have, nonetheless. However, I see the keyboard as more of a cherry on top. The main feature here is the AAS Plus as raising the keyboard area, aside from the obvious ergonomic benefits, provides better airflow, allowing the system to push all that CPU and GPU muscles to deliver your games while keeping temps comfortable levels.

At this point, we can already consider the Zephyrus S17 as a winner, although I can’t wait to try a refreshed Zephyrus Duo 15. I need the screen more than the keyboard, a matter of personal preference. Also, it’s expensive, starting at PHP 184,995 for the base model and PHP 249,995 for this top-of-the-line model. Alternatively, there’s the Zephyrus M16, but without the bells and whistles mentioned above. But if you have the budget, this is a great laptop to have.