Huawei has officially released its first laptop in the Philippines. Launched just this weekend, the Matebook 13 is a thina nd light ultrabook that very closely resembles Apple’s Macbook 12. We’ve seen the previous models of the Matebook and were impressed by it. 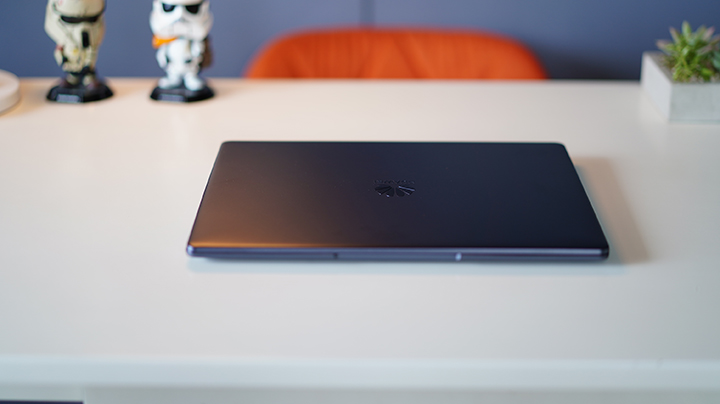 The Matebook 13 is a more polished version — very thin at just 1.94mm and light at 1.3kg, although we must say it’s a bit heftier than we imagined considering that small footprint.

There are not a lot of ports in here too, just two USB Type-C ports (one on each side) and a lone 3.5mm audio port. The Type-C port also serves as a charging port.

The laptop looks sexy, built entirely with a metal body, and despite the 13-inch display, it still has a very small footprint. Never mind that this silver grey color was outright borrowed from the Macbook. The Matebook is a lot of sense, a Macbook for Windows. There’s a lot of similarities here, not just with the design but also with some of the key features. 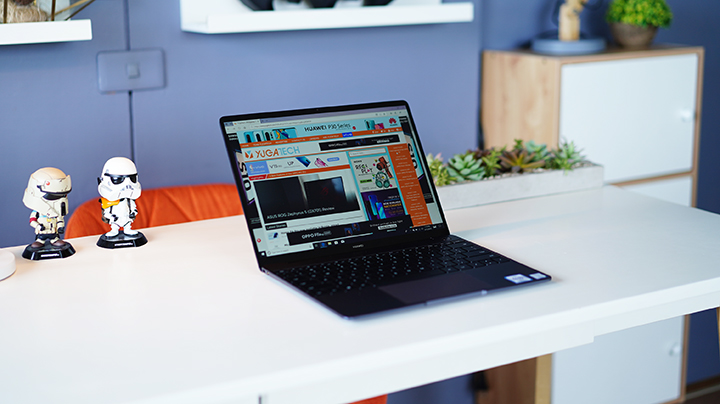 First off, our review unit runs on an Intel Core i7-8565U which is an 8th-generation (Whisky Lake) chip built on the 14nm process. It’s a quad-core processor with 8 threads, and has a base clock speed of 1.8GHz that goes up to 4.6GHz on Turbo Boost. The embedded GPU is an Intel UHD Graphics 620 which supports 4K display but it comes with an NVidia GeForce MX150 (with 2GB GDDR5 RAM) too if you need some extra juice. It comes with 8GB of DDR4 RAM right out of the box and has no option for 16GB. 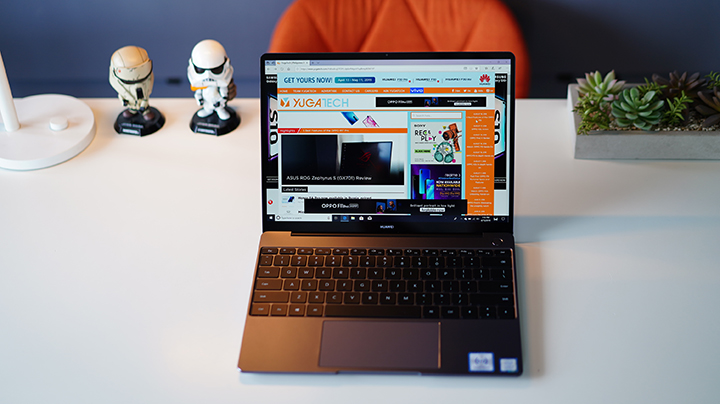 You also get 256GB or 512GB of SSD storage, with our unit having the latter partitioned into two. All in all, we’ve got a pretty good machine here packed in such a small laptop. Runs Windows 10 Home with a trial copy of Office 365.

Next, we got a 13-inch IPS display with 2160×1440 pixel resolution and a 3:2 aspect ratio. We don’t get to see a lot of laptop displays at 3:2 so this one gets a brownie point for bigger screen real estate. Also impressive to note are those slim bezels, allowing the for a bigger screen-to-body ratio. Unlike the Dell XPS 13, the webcam is still placed at the top end of the display so the orientation is at an eye-level.

The display is very sharp and bright though we’re not getting a touch-display for those who are curious. 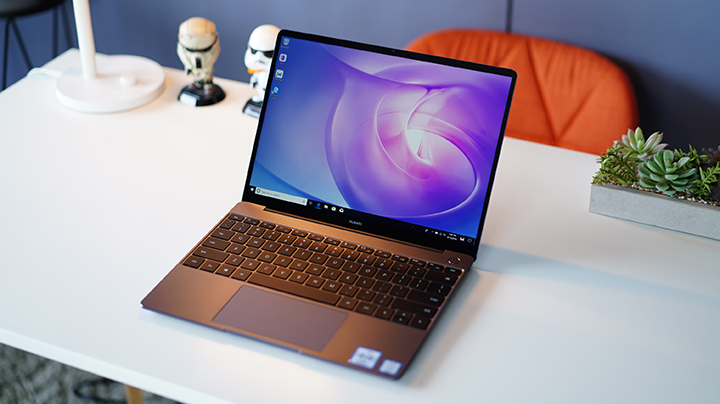 Another note-worthy feature to mention is the touch fingerprint sensor that is baked into the power button. Yep, straight out of Apple’s Touch ID. We liked it in the Macbook Pro so there’s no reason not to like it on The Matebook either. Once you’ve configured this during the initial set-up, no need to input any more passwords when logging in. Very convenient indeed. 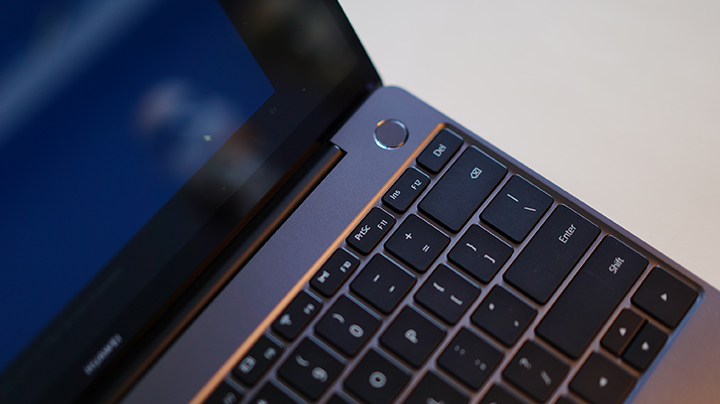 Now, let’s move on to that trackpad. It’s large and spacious with a glass surface but it feels a bit porous or not as smooth as the one in the Macbook. There’s a huge difference between the two, really. We’ll need some mroe time to be able to get used to that texture. It’s pretty easy to use though, spacious and accurate. Then we have those chiclet-type keyboard. They’re soft and comfortable to use, has longer travel compared to the ones on the Macbook and with a clickety sound when you type which is oddly comforting and re-assuring. In fact, we are using the Matebook 13 to write this article to get the feel of it. Still needs some getting used to especially with the distance between the keys. They’re also back-lit although no way to change the intensity. 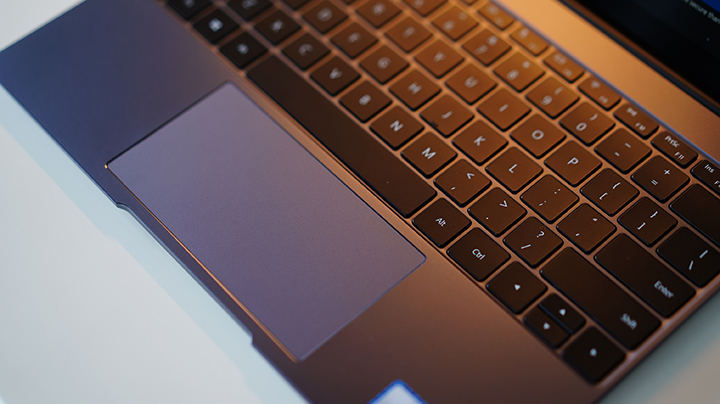 When we did some online typing test, we got a score of 54 WPM with 96% accuracy rate. Not bad. Should increase to more than 60 WPM once we get the hang of it.

If you’re also using a Hauwei phone, like the Mate20 or P30 series, there’s a built-in Huawei Share feature that allows you to quickly transfer work and files between the Matebook and the phone. Think of it as like the Share-It app. Should be pretty interesting once we try some use cases.

The two speaker grills that are found at the backside produce decent sound. There’s not a lot of bass but the audio is not muffled when placed in a flat surface. 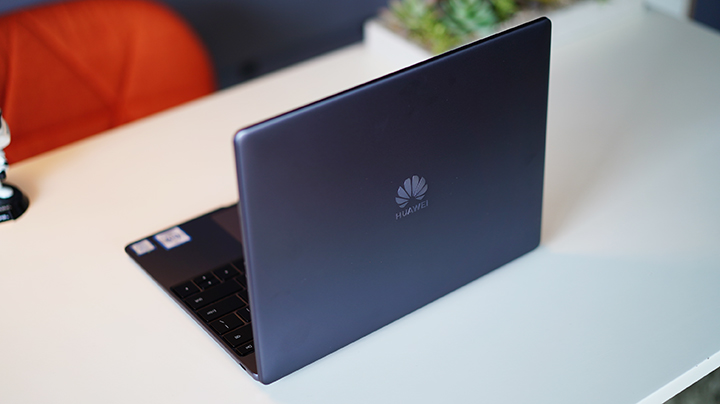 The Matebook 13 is a sleek and powerful laptop. You can take it with you everyday because of the small size and light weight, yet it still offers enough power for heavy productivity work and a little bit of light gaming.

We’ll be testing the performance and the battery life (comes with a 65W power adaptor) in our full review so watch out for that once we’re done.

Huawei Philippines is offering the Matebook 13 in two configurations and should be available in local stores already: