Microsoft has formally unveiled their latest Windows Phone 8 platform which will be available for both the handset and the tablet.

Expected to be released sometime after September this year, Microsoft’s Windows Phone 8 will have a lot more new features that were sorely lacking in WP7.

Here’s a quick summary of the stuff to expect from WP8. 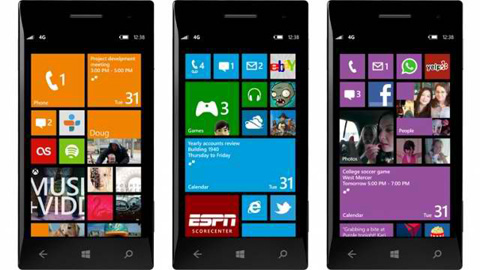 â— Will share native dev platform with Windows 8, support for DirectX so games for Windows 8 can be easily ported for WP8.

â— Support for dual-core processors and up to 64-cores in the future. The new handsets will be powered by a Qualcomm Snapdragon S4 Plus (dual-core Krait).

â— HTC, Nokia, Samsung, Huawei will be the first ones to make the handsets running WP8.

â— WP8 will be using Nokia Maps technology, supports multi-tasking/background operation and will be accessible by 3rd party apps with offline mode.

Windows Phone 7.5 devices will not be supported but an incremental upgrade to 7.8 will be made available soon.

I feel for the folks who bought W7 phones who suddenly got left out. I mean, a smartphone must get at least one major OS upgrade during its lifetime to get the most of your investment. My Galaxy Tab (classic) got an upgrade to Gingerbread from Froyo. My Sony Xperia got ICS from Gingerbread. My iPad 1 got iOS 5.1.1 before being abandoned by Apple. Tsk tsk Microsoft you’ve been a bad boy…

I feel sorry for the WP 7.x users. Though it won’t make sense if they update WP8 because it not compatible to the hardware, but the WP8 updates are really huge improvements, I am excited to see WP high-end phones! Good job Microsoft!

OMG, I should have read this before I bought the Lumia 900 just last night!!!

Underwhelming set of updates. No mention of notification improvements.

This is the info that I’ve been waiting for. Rumors of not being able to update to WP8 is what kept me from buying a Lumia unit.

I like WP7, very smooth interface in single core processor. Good software utilization but only lacking in apps and card slot that keeps me from buying one. WP8 with the improvement stated above, will be a best seller IMO.

first things first, I think tablets would get windows 8 RT/pro rather than windows phone 8.

Yes, MSFT is now on track with Surface, Windows 8 and now WP8. The question is, will the public latch on to this ecosystem considering majority has invested on the big 2.

7.5-7.8 is pretty much expected. Most features of WP8 isn’t compatible anyway to the current hardware. I’m just sorry for the Lumia owners not getting WP8 later in the year. Not sure though if WP8 apps will play nice with WP7.8

in the future maybe there will be no more available apps for 7.5 mango

An update to 7.8 from 7.5 was announced. The only time there will be no more available apps for 7.x is when they shut down the marketplace.

Developer will now concentrate on WP8
making apps maybe some apps will not
be compatible with the WP8 to Wp7.8 phones.

hmmm directx in a phone o.o

Interesting… Excited to see what a highend WP8 can do XD