Just last month, ASUS unveiled its Zenfone Laser 5.5S which is an upgrade to last year’s Zenfone 2 Laser. It’s got beefier specs like better CPU, bigger RAM, and bigger storage — with almost the same asking price as before. How does its performance differ from its previous iteration? We find out. 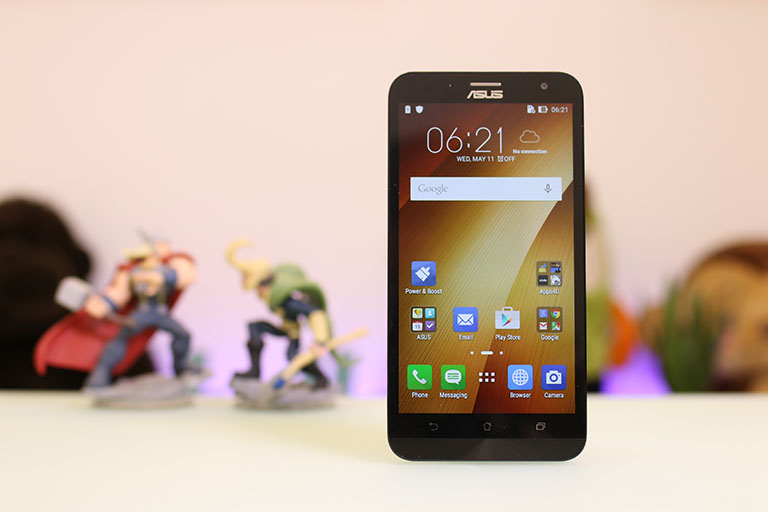 Note: Since there are some aspects that are identical to its earlier model, we will be using some parts  from the old review and combine them with the updated performance of the new variant.

Being a member of the Zenfone 2 lineup, the Zenfone 2 Laser 5.5S sports the similar design as the original Zenfone 2. Up front is a 5.5-inch display with Corning’s Gorilla Glass 4 for protection. 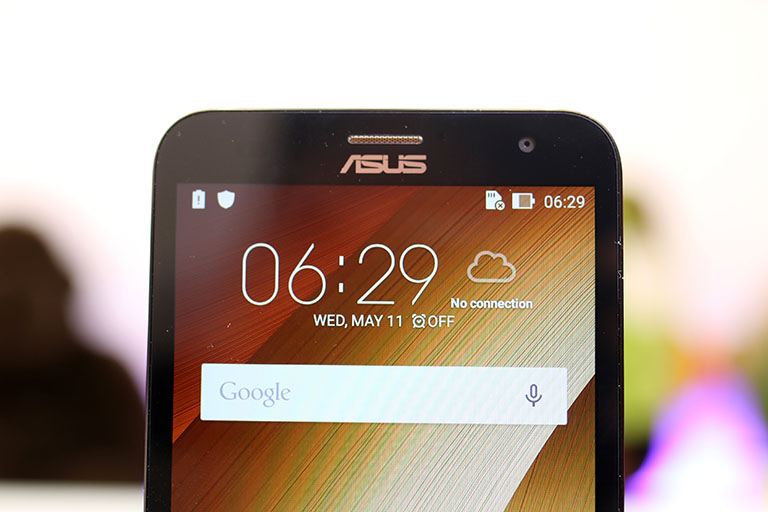 Situated above the display are the earpiece, 5-megapixel AF camera, and the ASUS logo. Found below are three unlit capacitive buttons for navigation and the signature concentric-circle design on the chin.

The left and right sides of the device are devoid of any keys and buttons, but situated up top are the headset jack, metallic power/lock button, and microphone. Placed at the bottom are the microUSB port and microphone. 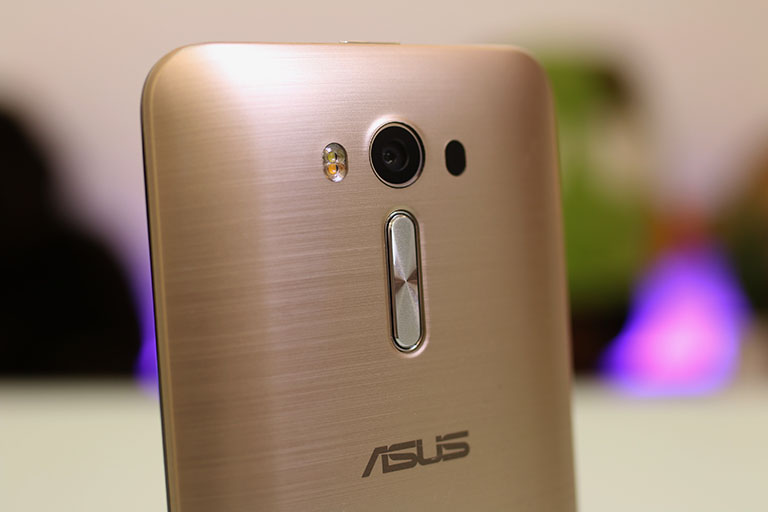 Flip the Zenfone 2 Laser on its back and you will see the metallic volume buttons, speaker, the 13-megapixel shooter, dual-LED flash, and the Laser AF which is also found on the Zenfone Selfie. 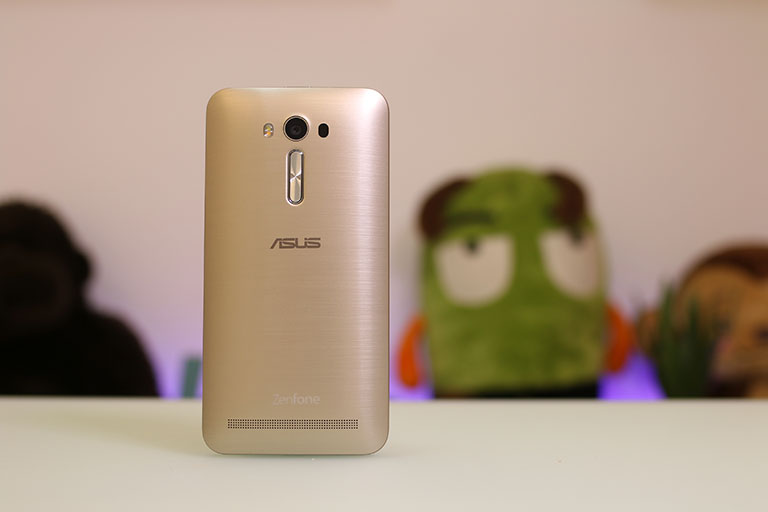 Now for the rest of the rear part, this is actually what makes the Laser, or any other Zenfone 2 for that matter, an attractive smartphone. The plastic backplate has a matte metallic finish which helps keep smudges away and gives off a nice glow whenever the light hits it. Its curvature, which thins at the edges, feels nice on the hands and makes the device easy to handle.

The Laser 5.5S comes with IPS display and HD resolution that equates to 267ppi. Pixels are discernible but can still be considered as decent. Viewing angles and colors are good but tend to be on the warmer side. Good thing ASUS included the Splendid app which lets you adjust the color temperature and choose between four screen color modes. 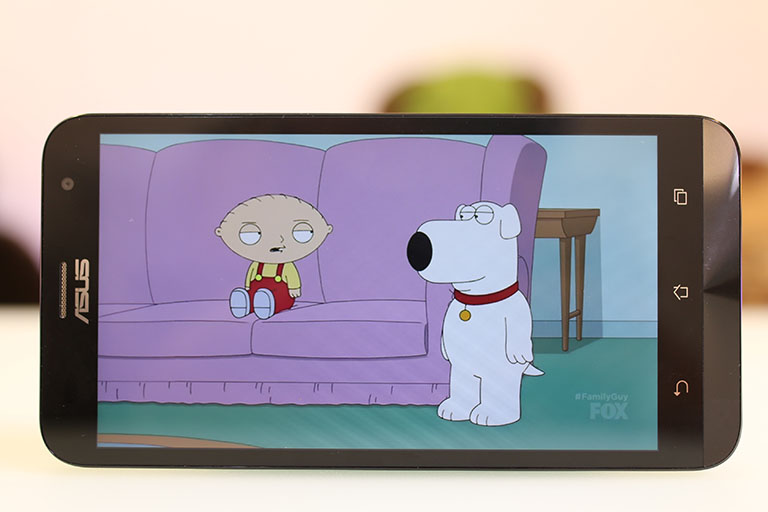 As for audio, the Laser’s rear speakers are capable of producing loud sounds that can fill a small room. By default, the sounds are inclined towards trebles with barely noticeable bass. 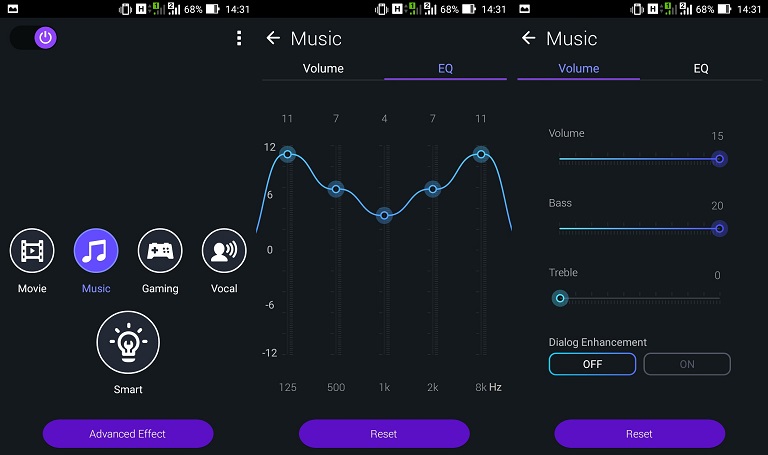 To remedy, the Laser features an Audio Wizard that allows you select between five audio profiles (Movie, Music, Gaming, Vocal, Smart), adjust the bass and treble levels, and play around with the equalizer. In our case, the best setting is to put the bass level to max to balance it out. With that feature on, the Laser has one of the nicest speakers around for a smartphone.

The Laser comes with Android 5.0.2 Lollipop out of the box skinned with ZenUI. It’s easy to navigate and visually enticing, however, it feels a bit clunky and doesn’t feel in-line with Lollipop’s simple Material approach. On the bright side, you can install your favorite launcher and customize it to your liking if you’re not a fan of ZenUI. 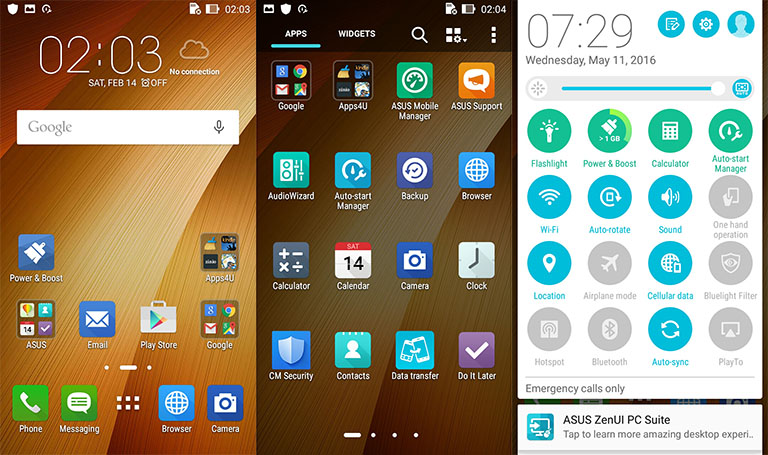 When it comes to pre-installed apps, the Laser has tons of it. When we check out the apps we need to update after setting up our Google Play Store account, the ZenUi Instant Update prompted us with 31 apps to update. This includes ASUS PixelMaster Camera, ASUS Keyboard, ASUS Calendar, ASUS Launcher, ASUS Messaging, ASUS Gallery, etc. Add to that Clean Master, Dr. Safety, Amazon Kindle, Zinio, 50+ Games!, and Trip Advisor which you cannot uninstall. 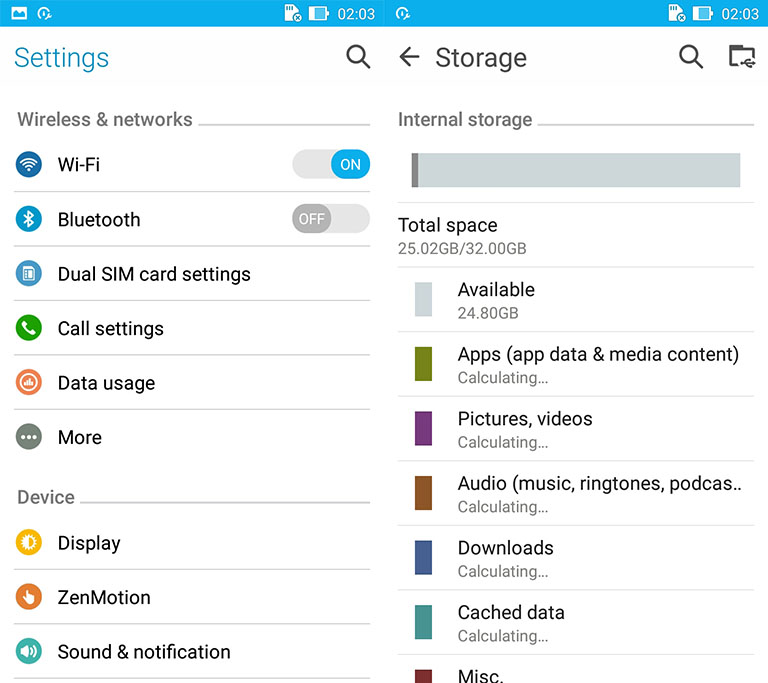 ASUS equipped the Laser with a bigger 32GB of internal storage compared to the previous 16GB. Less the system reserved memory, you have 24.80GB as usable which is still spacious for media files and such. We’re glad that ASUS gave a bigger storage for this new model since we weren’t that happy with the 10.68GB available space of the previous variant.

One of the Laser’s strongest suits is its 13-megapixel camera. It doesn’t sound much on paper but it uses the company’s PixelMaster Technology, dual-tone LED flash, and infrared-based Laser-guided autofocus system found in its other siblings like the Selfie, Max, and Zoom. Before you get excited, let us tell you that it’s not going to compete with high-end camera-centric smartphones like the Xperia Z5, LG G5, Galaxy S7, and iPhone 6S when it comes to image quality. After all, this is a sub-Php9K device, however, this doesn’t mean the Laser is not a good shooter. 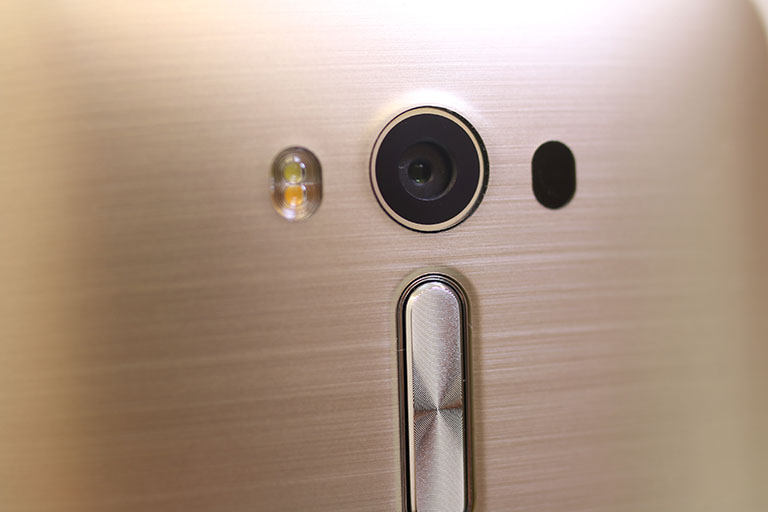 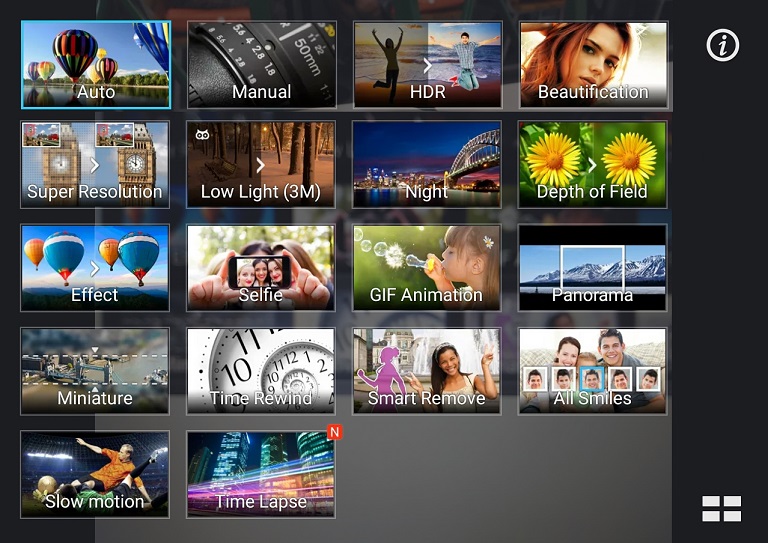 As for quality, resulting images have good details and colors. The 5-megapixel front camera is good for selfies and video calls but don’t expect the same quality you can find in other cameras with dedicated front shooters. The Laser also has quite a lot of in-camera features, just take a look at the screenshot above. As for image and video samples, we list them down below. 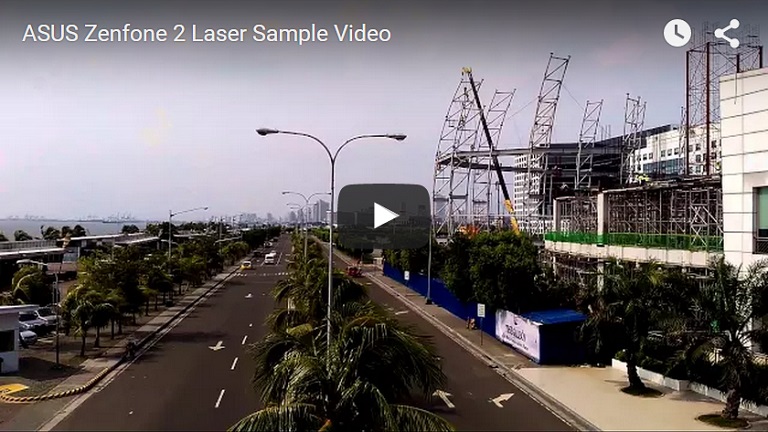 Powered by a faster Snapdragon 615 MSM8939 octa-core CPU, a bigger 3GB RAM and an updated Adreno 405 GPU, the Laser still proves to be a solid mid-ranger. We played EA UFC and it was able to run well with minimal lags and without much warming. As for the benchmark results, it got almost double the scores compared to the Laser 5.5 variant that was released last year. 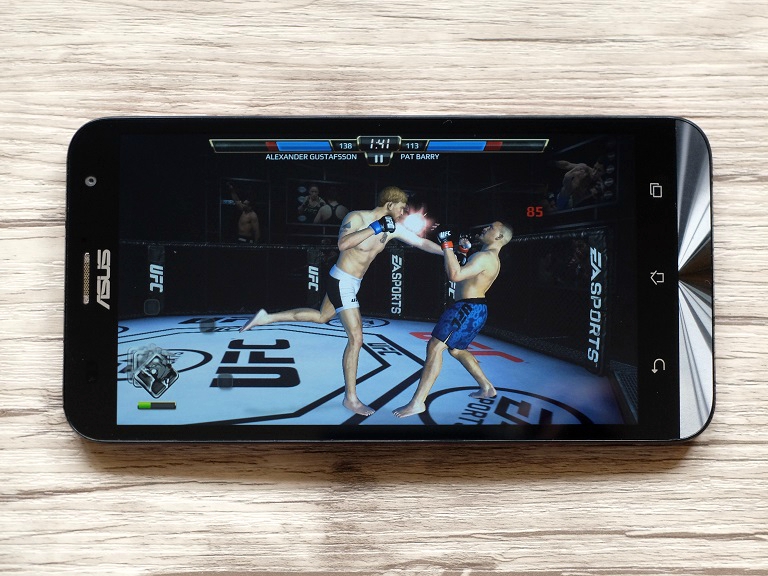 As for the benchmark results, it got almost double the scores compared to the Laser 5.5 variant that was released last year.

The Laser comes with your usual connectivity features like 4G LTE, dual-SIM (micro), Wi-Fi, Bluetooth, and GPS. There’s no NFC but that’s not really a huge letdown. Both SIM card slots support mobile data and dual-SIM call forwarding. Call quality is good and has no problems connecting to mobile data as long as strong reception is available.

Equipped with not-so-power-hungry specs coupled with the same 3,000mAh battery, we were able to get good mileage on the Laser as it can last a whole day with constant Wi-Fi connectivity, a few hours of mobile data, light calls and texts, and a couple of hours playing games. On PCMark’s battery bench, we were able to get a solid 10 hours and 32 minutes of battery life.

As for our video loop test that involves continuously playing a video on Airplane Mode and 50% brightness and volume, we were able to squeeze out 13 hours and 40 minutes on this thing.

ASUS still has a strong yet affordable offering with the Zenfone 2 Laser 5.5S. At Php8,995, buyers can get a Lollipop-powered smartphone with a good build and design, decent display and a more capable performance, plus great battery life. Add to that the more than capable 13-megapixel shooter with Laser-guided autofocus which appeals to casual shooters who demand better AF performance. 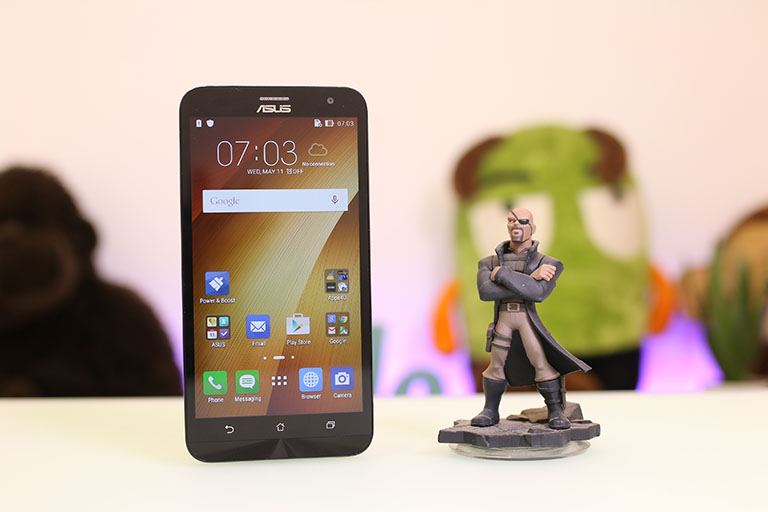