Last month, Starmobile unveiled the Diamond X1 which is the company’s first Android smartphone to sport an octa-core CPU. And just this afternoon, Cherry Mobile also unveiled their own in the form of the Cosmos Z2. Let’s pit them against each other to find out which looks better on paper. 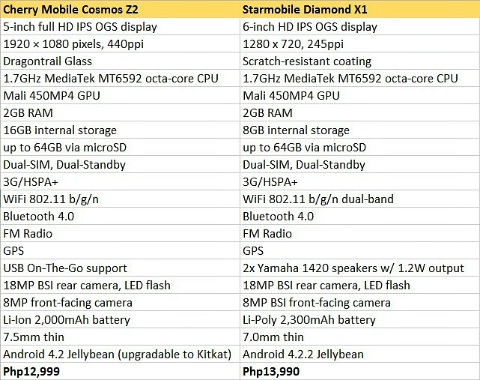 Based on the specs listed above the Diamond X1 wins in terms of display size at 6-inches compared to the Cosmos Z2’s 5-inches. However, the Cosmos Z2 has the advantage when it comes to resolution with its full HD display and 440ppi pixel density. The Diamond X1, on the other hand has HD resolution at 245ppi.

Both devices sport their own screen protection. The Z2 has Dragontrail Glass which we know to be really tough when it comes to scratches. Meanwhile, the X1 has an undisclosed scratch-resistant coating laid on top of its display.

In terms of storage capacity, the Z2 packs a larger 16GB compared to the X1’s 8GB. Both have support for microSD cards for up to 64GB.

When it comes to added features, the Z2 has USB OTG while the X1 has two Yamaha 1420 speakers. The X1, considering its size, sports a thinner body at 7.0mm compared to the 7.5mm body of the Z2.

At this point, it’s unfair to conclude which is the better octa-core smartphone without reviewing them first, so we’re looking forward to testing these units ourselves. For now, feel free to chime in and tell us which smartphone you think is the better choice – the Cherry Mobile Cosmos Z2 or the Starmobile Diamond X1?