Cherry Mobile released the Selfie Two, a successor to the first-generation Selfie, with 13-megapixel front and rear cameras and a more affordable price to boot. Is it worth the Php4,999 price tag? Let’s find out in our full review.

The design of the Selfie Two doesn’t stray away from the new flagship Flare series the local brand introduced last year. It has a sleeker and more premium look when compared to the original Selfie in 2014. 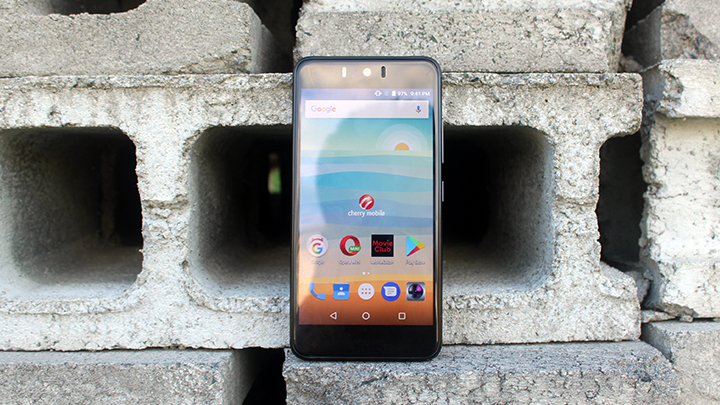 At the front are your usual set of sensors, the 13-megapixel front camera and the accompanying LED Flash, and the 5.5-inch display. The positioning of the call speaker grille is different as it’s only about a centimeter and is placed vertically beside the camera. There are no capacitive buttons on the device as the navigation is done on screen, though the chin is bigger than the top bezel. 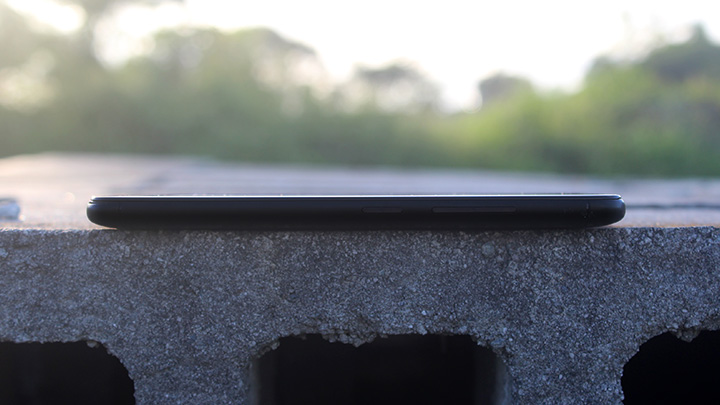 The power/lock button and the volume rocker is at the right side of the device. There’s nothing on the other side, but it emphasizes the slimness of the device. The 3.5mm audio port and the microUSB port are all at the top of the phone, while the microphone is placed at the bottom. Turn the device on its back and we have the 13-megapixel rear camera situated at the top-middle part with the LED Flash above it, and the round fingerprint scanner just right below. The Cherry Mobile wordmark is in the middle, and the small loudspeaker sits at the bottom. The unit dons a matte black color that looks premium and is quite susceptible to fingerprint smudges and grime from time to time but can be easily wiped out with a clean cloth. Prying open the device reveals slots for two micro SIM cards and a microSD card for additional storage. The 2,900mAh battery is intact and cannot be removed. 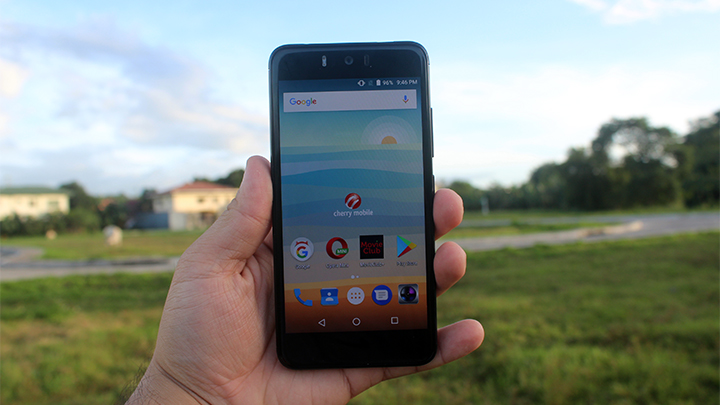 The Selfie Two is a device that’s great to hold since its back is curved in a way that it conforms to the hand, unlike other recently released phones that opted flat rear profiles. Its grip is also good, and the device can be navigated well with one hand. The extra bezels at the top and bottom also help when navigating the device in landscape mode and in gaming. 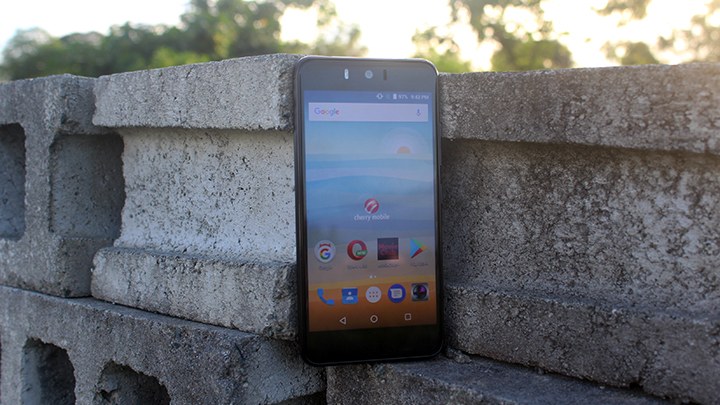 A 5.5-inch display sporting an HD resolution is what’s in the Selfie Two, and its good to look at most angles — the colors are vivid, the brightness is just enough to be viewed outdoors and to use for bedtime reading, and the contrast is good. Its 267ppi may be something you’d nitpick but the resolution is just enough to view most details with the naked eye. You can change the temperature of the display or the vividness (Miravision) through the display settings. 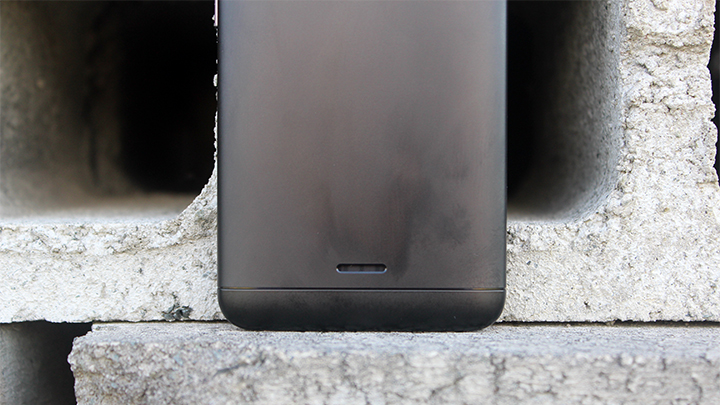 The Selfie Two doesn’t offer many optimizations for sound aside from a BesLoudness function which enables a volume booster for the loudspeaker and is tucked inside the sound settings. Other than that, audio sounds decent whether you listen to media on the phone via a wired audio gear or the loudspeaker. The Cherry Mobile Selfie Two has 13-megapixel cameras with accompanying LED Flash on its front and back. Both offer panorama, beauty and bokeh modes. The Bokeh mode requires a specific gesture to register elements to be blurred and may take a bit of time, and the blur’s intensity can be adjusted after the process before saving. 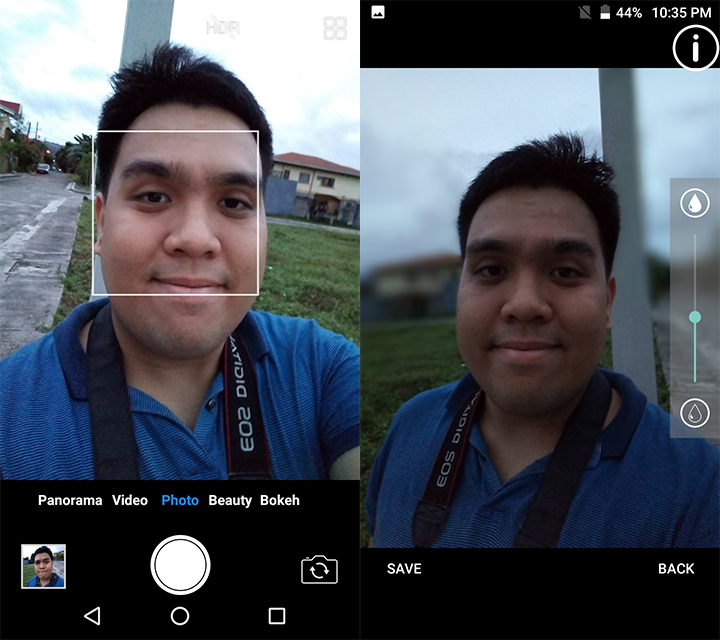 The rear camera has great details and little noise on low light scenarios and offers good colors and contrast. Exposure can be adjusted manually on the screen once you tapped on the subject to focus. Here are some sample photos:

The front camera also is great for low-light scenarios as it adjusts itself to offer a better lighted image, though it may capture photos of reddish hue from time to time. The LED Flash offers a warm tone to your selfies, and the blur mode can blue your face when you set the intensity to maximum at times. Here are some sample selfie photos:

Videos, on the other hand, are not this phone’s forte. The Selfie Two only provides 720p videos and lack the necessary colors and vibrancy it needs. Here’s a sample clip:

The cameras are really good for a sub-Php5k smartphone, but we hope Cherry Mobile pushes updates to further improve them. 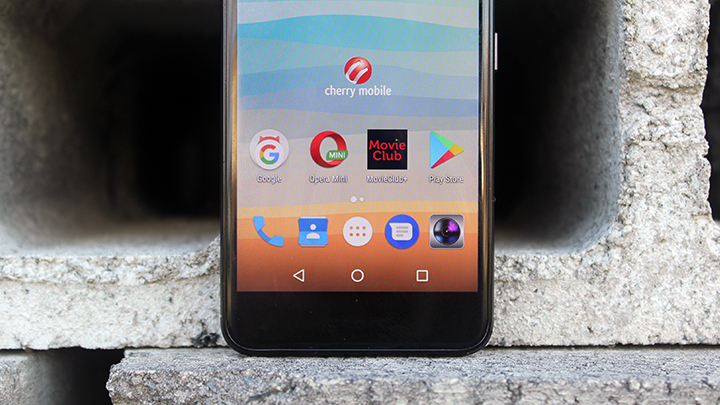 The Selfie Two comes with stock Android Nougat right out of the box and comes with Cherry Mobile’s own pre-installed apps such as Cherry Play, Movie Fun Club, and Info Center. Other notable apps pre-installed include Xender, Chumslive, and Enjoy (Rewards app). Notable Nougat features such as split screen multitasking are available. Pop-ups appear both on-screen and in notifications every now and then, and are somehow only related to Cherry’s own apps. 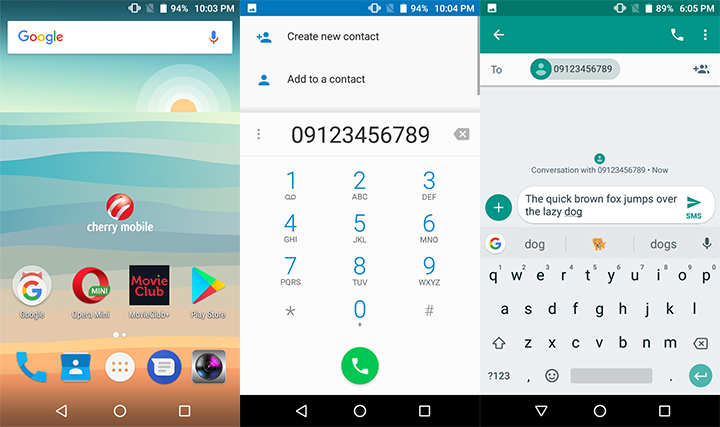 As such, you’re only able to use around 7.16GB of the allocated 16GB internal storage for storing your apps and files. This is where the microSD card slot comes in handy.

Armed with a 1.3GHz quad-core MediaTek MT6735 CPU, Mali-T720 GPU, and 2GB of RAM, moderate multitasking has been generally decent with the phone. If you’re a fan of multiple social media apps that oftentimes run in the background, you may experience occasional slowdowns with the device with prolonged use.

Gaming with casual titles such as Zombie Tsunami seems to be on the decent side, but graphics-intensive games such as Asphalt 8 or Hungry Shark Evolution may suffer from slowdowns and dropped frames even on low settings. 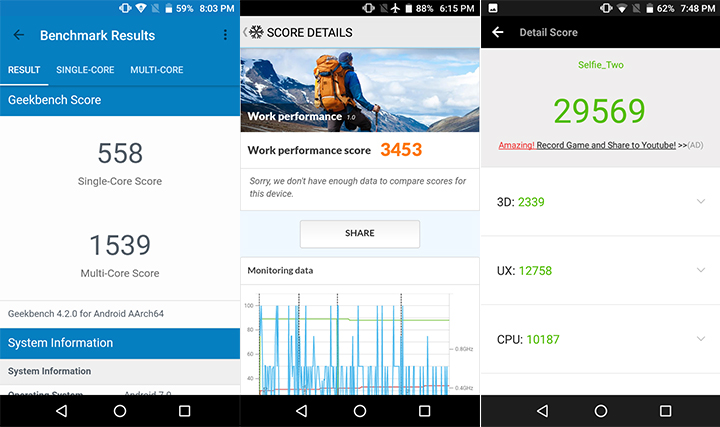 Here are some results from the benchmarks we took:

We did not encounter any connectivity issues with the Cherry Mobile Selfie Two. WiFi connects fast to routers and stays connected at the furthest distances allowed, Bluetooth connection to both audio devices and other phones work seamlessly, GPS locates you well though it may take time, and 4G LTE connection is decent and works good enough for casual mobile browsing. The fingerprint scanner takes up to five registered thumbmarks and is responsive to unlock your phone and take selfies. Taking in calls with the device has been a pleasant experience as the microphone offers clear voice recording and the call speaker grille is audible albeit small. You may need a few uses to get the hang of the call speaker, though, as it’s placed at the right side of the camera and it’s a lot smaller compared to those from other devices. 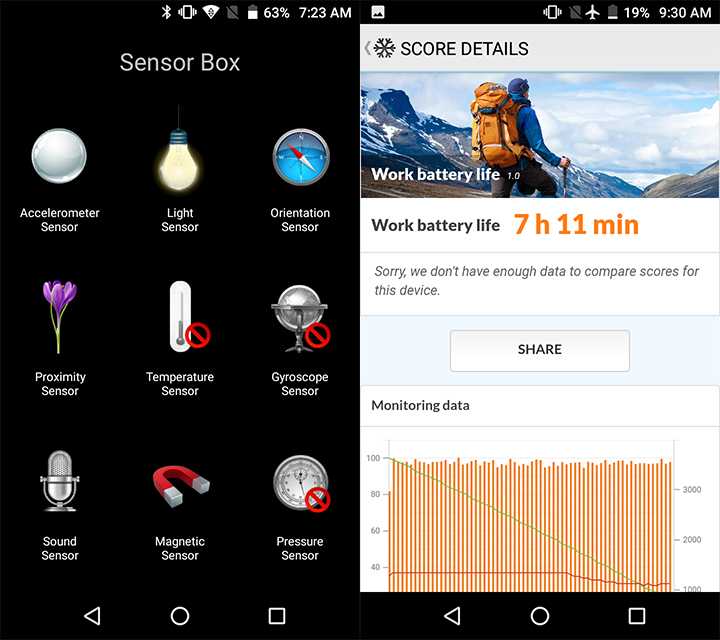 With a 2900mAh battery, the Selfie Two was able to last for only 15 hours with moderate use of calls, SMS, and continuous internet connection via WiFi or mobile data. Our PCMark battery test puts the device at 7 hours and 11 minutes while our video loop test lasted 8 hours and 43 minutes, which is kind of a downer if you’ll look at other smartphones with similar battery capacities on our PCMark Battery Chart. Recharging is also a bit slow as it. There’s this wish that Cherry Mobile could’ve placed their OS here as well as we’ve seen it as a good battery optimizer, like in the Flare S6.

Cherry Mobile’s second iteration of a selfie smartphone is here, and the Selfie Two is poised to be a good budget offering for a number of reasons: the device has two cameras that offer great options to capture moments or selfies, its build is something you’d see from the flagship Flare S6 series of devices, and is a very decent smartphone to get at Php4,999. 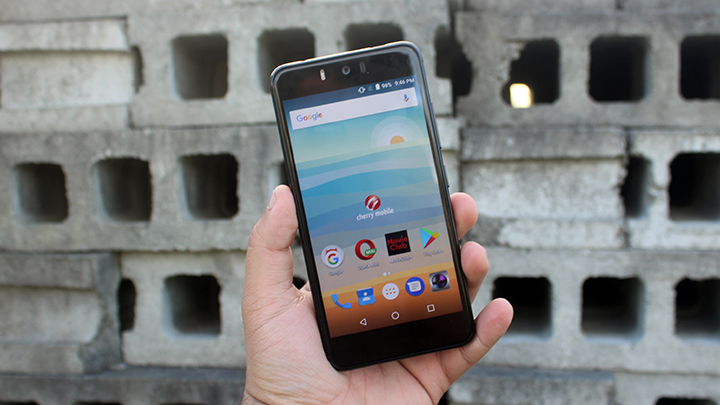 There are still gripes we’d need to get accustomed to, such as the small call speaker grille on top and the battery that seems to be weaker compared to other Cherry Mobile’s devices we’ve reviewed recently, but the Selfie Two is one smartphone that aims to fill in the need for those who want a selfie smartphone at a more affordable price.

What we liked about it:
– Good cameras
– Good display
– Reasonably priced for the features it has

What we didn’t like about it:
– Battery drains fast
– Small call speaker grill