After releasing the Xperia Z2 early this year, reports suggest that Sony is already planning to launch an update to it. Photos of an alleged Xperia Z3 surfaces on the Internet along with what looks like to be the Xperia Z3 Compact. 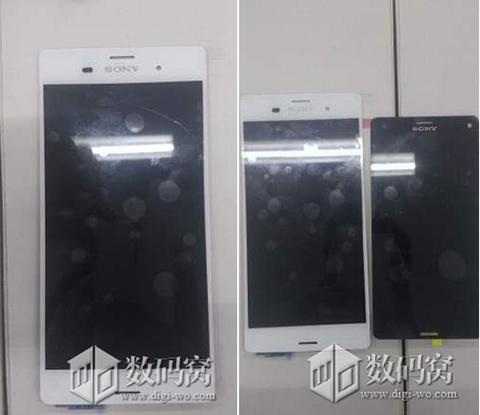 The photo above comes from Digi-wo, a Chinese forum that has a good track record with Sony leaks. It shows the display of the purported Xperia Z3 which evidently shows a resemblance to previous Xperia models and still makes use of its signature OmniBalance design. Beside it is the smaller, Compact version hinting of its arrival too — although that shouldn’t surprise us since we’ve been seeing mini versions of flagship smartphones these days.

According to previous leaks, the rumored Xperia Z3 is said to come with a Full HD display (1920 x 1080 screen resolution) with unspecified size. It should also sport the new Snapdragon 805 processor from Qualcomm that’s clocked at a speedy 2.7GHz accompanied by 3GB of RAM. Imaging-wise, the Z3 is equipped with the same 20.7-megapixel rear camera with f/2.0, ½.3 – type Exmos RS sensor.

It was also said to come with a metal frame coated with PVD (Physical Vapor Deposition) that makes it more corrosion resistant, stronger, and scratch-proof than its previous models. Earlier reports point to an August release, but there is also a big possibility of seeing it during this year’s IFA event which will be held in September. Either way, we can safely expect a new flagship from Sony before 2014 ends.