From Nexus One to Nexus 6P: The Evolution

From Nexus One to Nexus 6P: The Evolution

The latest Nexus smartphones have already been launched officially and with them come new specs, features, and form factors that now flaunt a more attractive look. With that said, let’s take a look at its humble beginnings and how the Nexus handset lineup has evolved through the years. 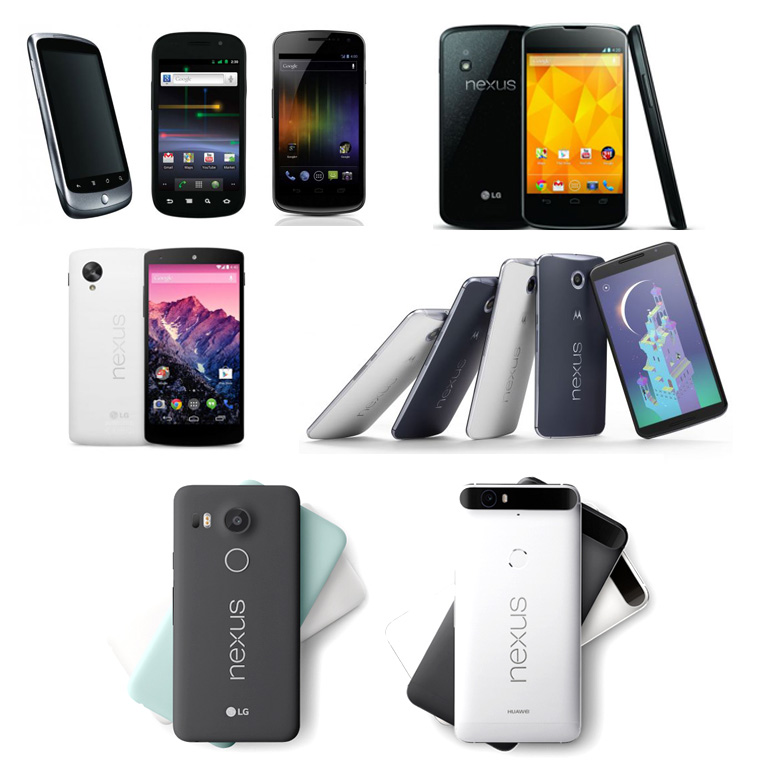 Here are the first three generations:

The first handset to receive the Nexus label is HTC‘s Nexus one which was announced back in January of 2010. It’s been equipped with a rather small display at 3.7 inches, but already sports an AMOLED screen that delivered bright and crisp images during our time with it. It also possessed a decent Snapdragon S1 processor with 4GB of internal storage. Before the year ended, Samsung came out with its own Nexus S that got a bigger 4-inch display and has been blessed with the company’s famous Super AMOLED screen. It got a bigger 16GB storage, a VGA front camera, and we found the entire form factor to be sexy when we had the chance to see it back in 2011.

Google seemed to like the partnership with the South Korean giant as it tapped them once again for the GALAXY Nexus — the third Nexus device. This was the time that people are getting into bigger displays so the company made the screen bigger at 4.65 inches and now with HD resolution so pixel density received sort of a huge jump. CPU has also been bumped up significantly and features a dual-core processor with a gig of RAM (a first among the Nexus devices). From VGA, the front shooter has been updated to 1.3 megapixels which produced better selfie shots.

The fourth, fifth, and sixth generation Nexus phones were all announced in October. Starting with LG‘s Nexus 4, it boasted a True HD IPS Plus display that had more width than height which proved to be advantageous when used for browsing sites and checking emails. Not only that, but it also flaunted LG’s Zerogap Touch technology which was the same approach that Apple did with its iPhone 5. This means that there were no gaps between its screen layers, making the images appear closer to the glass. On the downside, we found that colors weren’t as punchy as its peers.

Speaking of display, we were quite blown away with the vibrance and pixel density of the Nexus 5 at Full HD. Also made by LG, this phone had support for Qi wireless charging just like its previous model. What was new with this handset was that it had LTE capabilities from the get-go so this made it appealing to consumers on-the-go. Battery capacity has also been upgraded with Android Lollipop OS to boot. Its next iteration, the Motorola-made Nexus 6 got bigger with almost 6 inches of screen real estate. It was powered by a very capable Snapdragon 805 CPU clocked at 2.7GHz partnered with 3GB of RAM which made processing casual tasks effortless.

And now the two latest Nexus handsets — the 5X from LG and 6P from Huawei. The Nexus 5X is considered as a smaller and toned down version of the 6P at 5.2 inches with Full HD resolution. Its bigger brother, on the other hand, has the 5.7-inch WQHD display that amounts to 515ppi and is reinforced with Corning’s fourth iteration of Gorilla Glass. It also sports an all-metal build which scream premium quality, and not to mention sexy. Both snap photos using a 12.3-megapixel camera and records 4K videos right off the bat. They both  have the latest features like NFC and LTE connectivities, a fingerprint scanner, and the a USB Type-C port which is reversible and transfers larger data by the second.

There you have it, folks! From Google’s first foray into the smartphone market with its Nexus One all the way to the Nexus 5X and 6P, we can see that the company always wanted to offer its users competitive devices with their capable and reasonably priced handsets which have been among the firsts to receive software updates since 2010.