Huawei Nova 3i vs Nova 5i: What’s Different?

Huawei has finally unveiled the latest generation of its Nova lineup, the Nova 5 series. Included in the newly-revealed lineup is the Nova 5i, a successor to 2018’s Nova 3i. What are their similarities and differences? Check it out below. 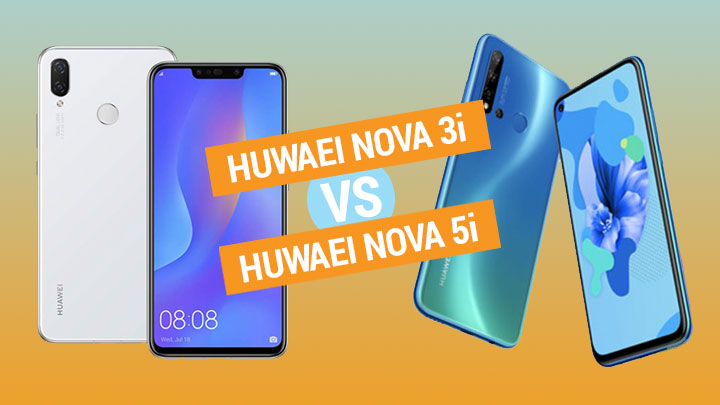 Similarities of Nova 3i and Nova 5i:

Differences between the two devices:

Starting off with the display, the Nova 5i has a slightly larger display, measuring at 6.4-inches, while the Nova 3i has a 6.3-inch one. Despite the slight difference, both smartphones are sizeable and are pretty good for watching videos and movies. Both devices are also equipped with an IPS display.

Both devices are powered by Kirin 710 and have the same graphics chipset as well. The Kirin 710 is Huawei’s mid-range chip that’s pretty capable of the usual tasks such as browsing, going through social media, and playing games. Graphics-heavy games such as Asphalt 9 and Mobile Legends also run smoothly, while PUBG Mobile is playable on its medium frame rate setting.

When it comes to RAM, however, users have the choice of 6GB or 8GB RAM with the Nova 5i. On the other hand, while the Nova 3i is stuck with its lone 4GB RAM offering, it’s still a pretty capable smartphone that can run multiple apps in the background. Storage-wise, both come with a 128GB ROM and are expandable via micro SD card.

The 3i and 5i vary greatly when it comes to cameras. The 5i comes equipped with quadruple rear cameras, composed of 24MP + 8MP + 2MP macro + 2MP depth shooters, an obvious step up from the 3i’s 16MP + 2MP dual rear cameras. The front shooters are different as well. The 3i has 24MP + 2MP cameras situated on a bar notch, while the 5i has a single 24MP punch-hole front camera. Both the front and rear cameras of the 3i can produce sharp images with accurate colors. As for the 5i, we can’t say much yet about the quality of the photos it produces. We’ll know more about the 5i’s cameras once we get our hands on the unit.

The 5i joins the majority of newer smartphones with its USB-C port, while the 3i is left with its micro USB port. Wired headphones users can celebrate as both devices possess a 3.5mm headphone jack.

The Nova 5i carries the larger battery capacity at 4,000mAh, which is a definite improvement from the Nova 3i’s 3,340mAh battery capacity. EMUI 8.2 based on Android Oreo runs through the 3i, while the 5i comes with the newer Android 9 Pie out of the box.

Here are the prices of each device and their variants:

While the Nova 3i is still a pretty capable smartphone even if we’re well into 2019, the Nova 5i has improved a couple of things from its predecessor. The 5i is something to consider upgrading to if you currently own the 3i. What do you guys think? Share it with us in the comments!

Could this be directly connected to a projector especially for powerpoint presentations specifically in a classroom?

Is buying this phones still great ,unlike the past year, after the us Huawei ban?

Ps. The nova 5i 8gb variant is surprisingly unexpected