When Huawei launched the P20 Series the focus was on the flagships, the P20, and the P20 Pro. But a couple of weeks later, they unveiled the mid-range P20 Lite. Considering the other mid-range Androids in the market, can the Huawei P20 Lite gain solid footing? Find out in our review. 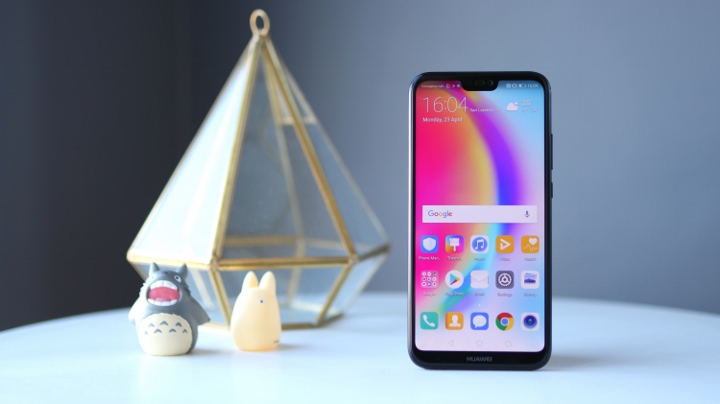 The Huawei P20 Lite, despite being a mid-range offering, still sports the design language that is found in its more powerful siblings, the P20 and P20 Pro. The front is dominated by a 5.84-inch screen with a notch design, so you’re getting more screen and less bezel especially at the top and bottom. 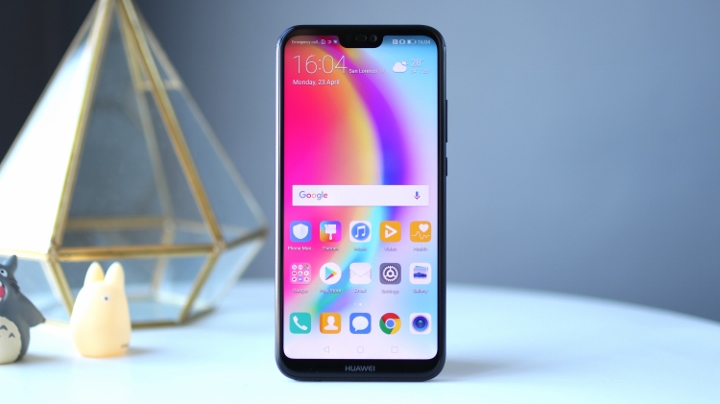 The notch at the top, houses the receiver, 16MP front camera, light and proximity sensors, and the LED notifications light. Below the display at its chin is the Huawei branding. 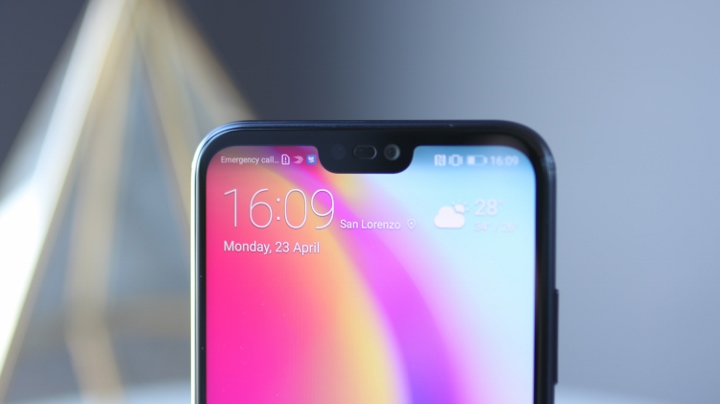 Placed on the left is the hybrid card tray for nano-sized SIM cards with the microSD card slot located in the SIM 2 slot. This is a bit of a downer considering that some of its competitors have dedicated microSD card slots. 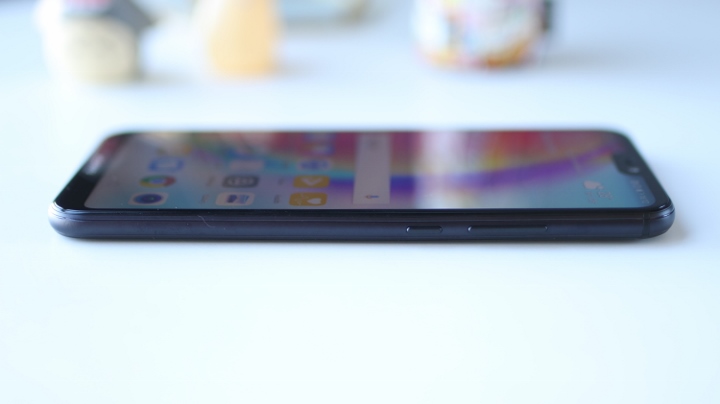 On the right are the lock button and volume rockers. These are made of plastic but clicky and doesn’t feel flimsy. Found up top is the secondary microphone, while down below are the 3.5mm audio port, USB Type-C port, main microphone, and loudspeaker. At the back are the protruding dual rear cameras, LED flash, and circle fingerprint scanner. 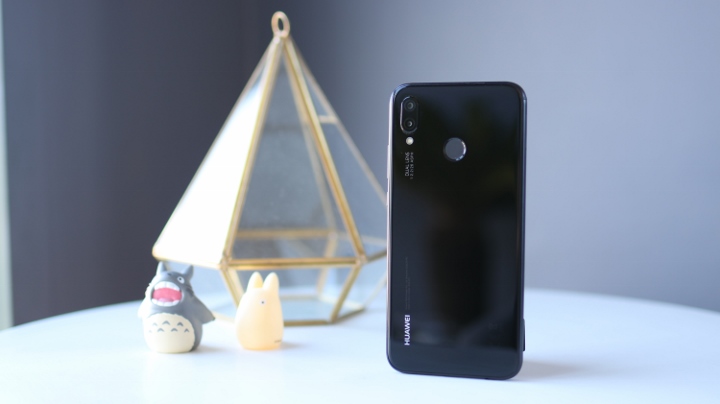 In the hands, the P20 Lite is every bit premium thanks to the metal frame and glass front and back, which easily catches fingerprints and smudges, by the way. The edges of the glass curves at the edges for that seamless feel, while the metal frame has thin grooves on it for better grip. 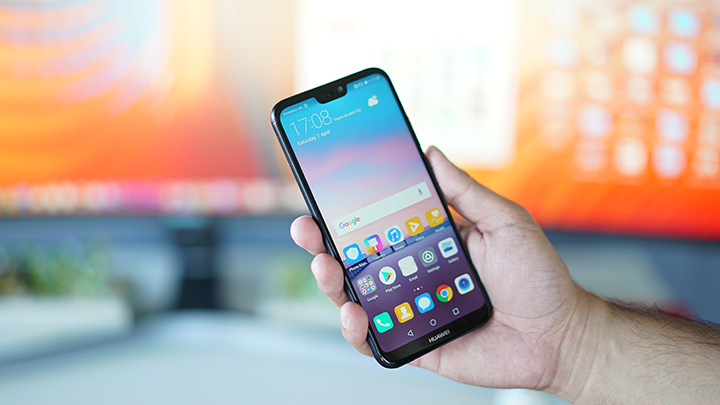 The dimensions are just right for people with small to average hands. It’s narrow at 71.2mm, the thinnest in the series at 7.4mm, and the lightest at 145g. 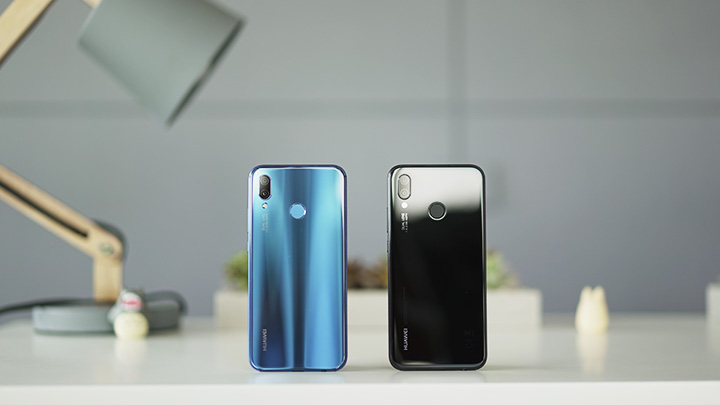 This unit we have for review sports the Midnight Black color, but if you fancy something different, there’s the Klein Blue and Sakura Pink as well.

The P20 Lite sports a 5.84-inch LTPS IPS display with FHD+ (2280 x 1080) resolution or equal to 432ppi. The phone has a 19:9 aspect ratio which is different from the P20 and P20 Pro’s 18.7:9 aspect ratio, but don’t worry as it doesn’t provide any disadvantage. Inside settings, you can switch between color modes namely default, warm and cold; adjust screen resolution from HD+ (1520 x 720) to FHD+, or have it done automatically by the system; as well as hide the notch if you’re not a fan of it. 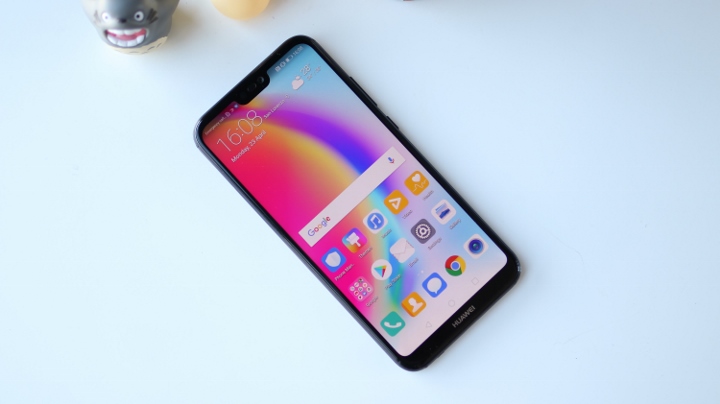 The P20 Lite’s screen is one of the nicest we’ve seen in its class and price range. It’s sharp, colors are accurate yet punchy, has good viewing angles, and vibrant enough for outdoor use. 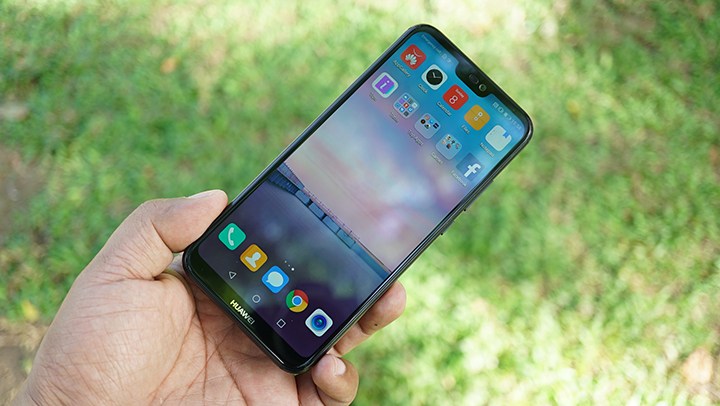 When it comes to audio, the down-firing speaker is loud and crisp but doesn’t have bass. This is fine for casual listening to Spotify, watching videos on YouTube, hands-free voice calls, or listening to Waze when navigating. It’s still better to use earphones or a Bluetooth speaker if you want a better listening experience.

The P20 Lite is equipped with dual rear cameras consisting of a 16MP main shooter and a 2MP secondary to aid in bokeh effects, which is the same configuration found on the Nova 2i. Unlike its P20 and P20 Pro siblings, it doesn’t have a Leica branding. 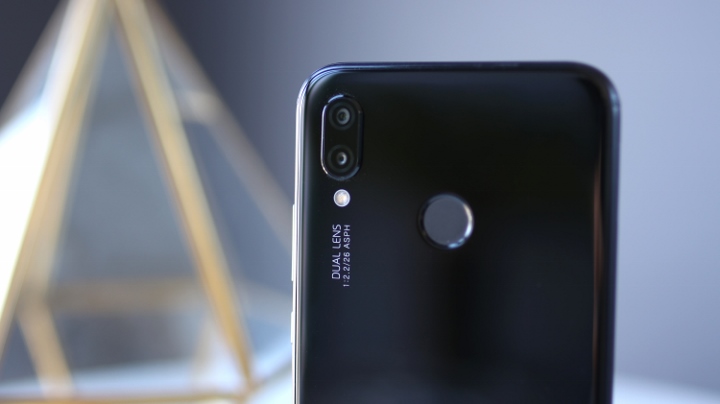 It comes loaded with plenty of camera features like Pro mode, AR lens (stickers), HDR, Night shot, Panorama, Light Painting, Moving Picture, Time-Lapse, and Slow-mo, to name a few. There’s a wide-aperture mode which simulates apertures of f/0.95 to f/16 but limits the resolution to 8MP. Selfies, on the other hand, are handled by a 16MP camera with fewer features like Panorama, AR lens, Time-lapse, Filter, and Watermark. It doesn’t have the same camera-assisted wide-aperture mode but has Bokeh effect and Portrait mode with Beauty levels.

Camera performance is good as autofocus is fast and captures the subjects quickly. Images produced have vibrant colors with sharp details and good dynamic range, especially in bright conditions. We also get decent results from the wide-aperture effect even when the subject is close to the background. Selfies, on the other hand, have sharp details with nice and subtle beauty effects.

When it comes to video, the P20 Lite maxes at 1080p resolution at 30fps with stereo audio. It is sharp with good dynamic range and decent colors but doesn’t have video stabilization so it is prone to shakes. Watch the sample below.

Running the P20 Lite’s software is EMUI 8.0 based on Android 8.0 Oreo. It uses a simple interface which uses multiple home screens to house applications, but you can also opt for the old style Drawer from Settings. Like with most Androids, swiping down from the top will reveal the shortcut keys and notifications drawer. When it comes to features, it has split screen, PrivateSpace which is like a secondary profile with its own home screen, App Lock, File Safe which encrypts files, one-handed mode, motion and voice control, and Simple mode. 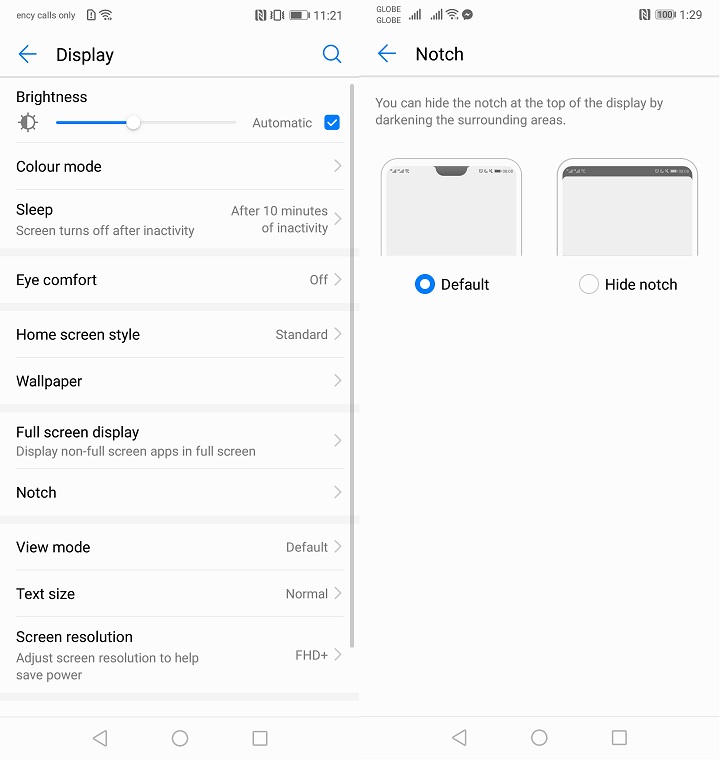 For the apps, it comes with your usual Google goodies and Huawei’s AppGallery which is like it’s own app store. Other apps are present as well like Facebook, Instagram, Booking.com, Z Camera, Lazada, and some games like Asphalt Nitro, Dragon Mania, Disney Kingdoms, Puzzle Pets, and Spider-Man. These can be uninstalled by we’d appreciate it if they were not included in the first place. The P20 Lite comes with 64GB of storage with 50.56GB as usable. This is not bad and would still satisfy users with plenty of files to store. USB OTG is present, and as mentioned earlier, there’s no dedicated microSD card slot so you will need to sacrifice the secondary SIM slot if you want to expand the storage.

Powering the P20 Lite is a HiSilicon Kirin 659 octa-core processor, Mali-T830 GPU, and 4GB RAM. If that configuration is familiar, that is because it’s the same hardware that is found in last year’s Huawei Nova 2i or Mate 10 Lite. I wouldn’t be surprised since the P20 and P20 Pro used the chipset from last year’s Mate 10 and Mate 10 Pro. This can be an advantage as well as the company can keep its cost down. 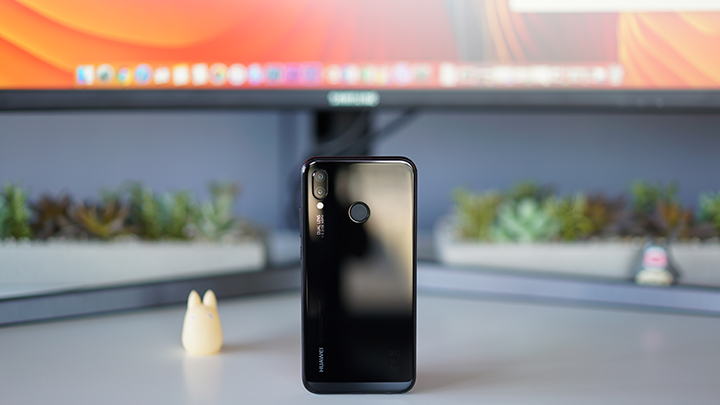 So far, performance is smooth and can handle the tasks we threw at it. Apps launch fast and switching between those apps is quick. The fingerprint scanner and face unlock feature are responsive and can unlock our devices almost instantaneously. 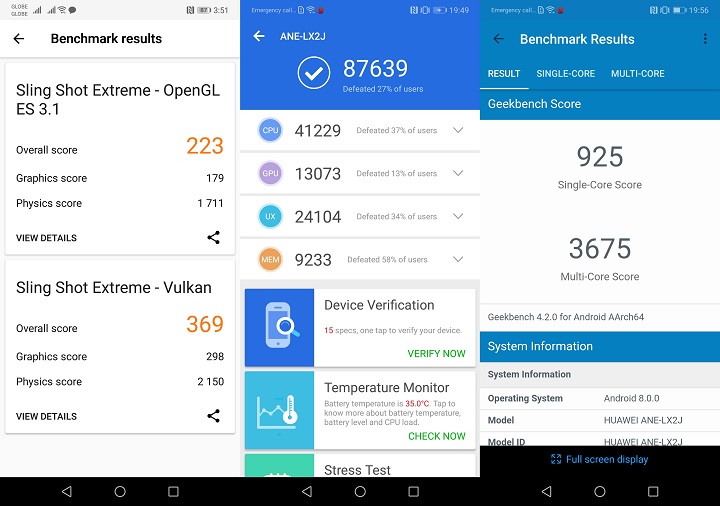 In terms of gaming, it can easily handle MOBA games like Mobile Legends and AoV. Tekken and PUBG (medium graphics) are playable as well but don’t expect smooth gameplay especially in intense scenes. When it comes to thermals, it tends to warm up on the top side near the camera which is enough to make your palm sweaty. Check out the benchmarks below:

The P20 Lite has 4G, WiFi, Bluetooth, and GPS – the basic stuff. So far, mobile data is fast, calls are loud and clear, while GPS works as advertised with apps like Google Maps, Waze, and Grab. What we find weird on our unit is the presence of the NFC logo at the notifications even though our unit doesn’t have it. This could be just an isolated software bug as other units we checked doesn’t have that. 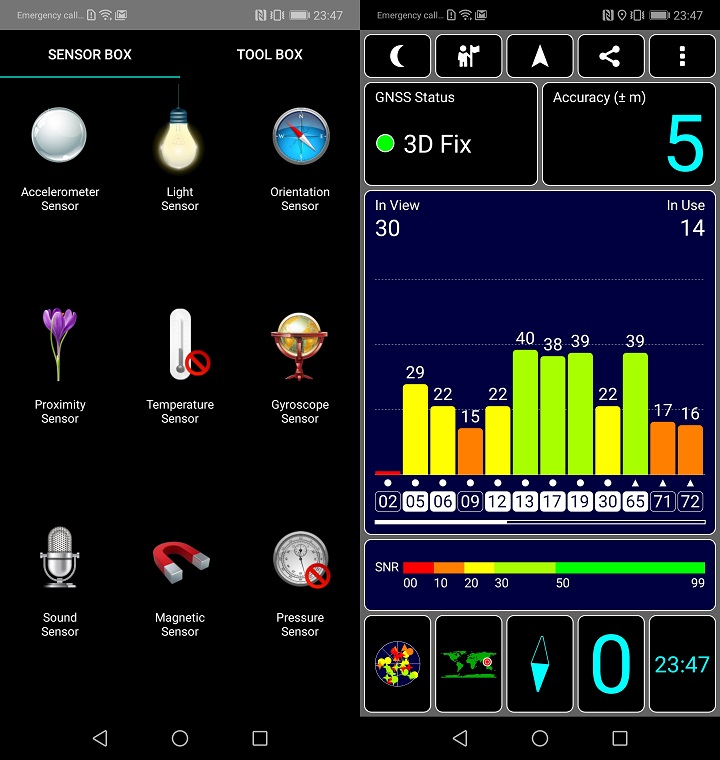 The P20 Lite is equipped with a 3,000mAh battery which is lower than Nova 2i. So far we’re getting around 7 to 8 hours of light to moderate usage consisting of heavy Facebook and Instagram browsing, some photography, and light gaming. PC Mark rated the battery at 8 hours and 29 minutes, while our video loop test yielded 10 hours and 30 minutes of playback which is not bad. Charging, on the other hand, takes 2 and a half hours.

The Huawei P20 Lite is like the mix of the old and the new. It has the same Kirin 659 chipset, RAM, and storage capacity as the Nova 2i, but with a new design and premium build. It has a good, high-resolution display which is perfect for watching movies and viewing photos. If you like taking photos, the dual rear cameras and selfie camera are up to the task. 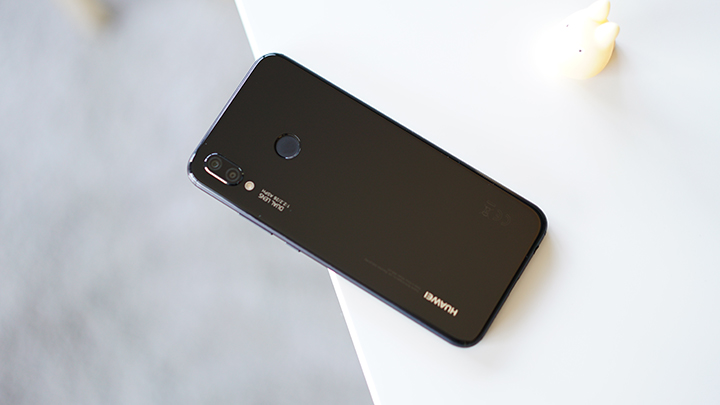 Performance-wise, it’s decent and can handle basic tasks, but it’s no heavy-lifter when it comes to gaming. Lastly, the P20 Lite is also light in the pockets. For Php15,990 it more affordable than other mid-rangers that recently launched in the country. So if budget is tight, not a heavy user, but looking for something premium with a good camera, this is it.

What we didn’t:
* Older chipset
* Not designed for heavy gaming
* No dedicated microSD card slot
* No video stabilization

The P20 Lite DOES HAVE NFC.
Charging from almost empty to 100% takes no more than 90-120 minutes at most with the fast charger provided a proper cable is used.
On average use the 3000 mAh battery lasts a whole day.

Sakura Pink variant is not available here in the Philippines. Why?

Does it have a phone wake feature? (Tap to wake, raise to wake, etc.)

You forgot to add that the P20 Lite has a USB Type-C and has a fast charging charger which makes it stand out from all of the midrange smartphones.

I don’t understand why phone manufacturers put glass backs and not make up for it with other features like wireless charging or waterproofing.

That just makes the phone a fingerprint magnet and more fragile than a normal plastic/aluminum back.

It’s not premium when you drop it once and your phone splits into a million glass shards.