Now that the Huawei P30 series is official, it’s time to check out what has changed among the company’s previous flagship smartphones. In this specs comparison, I’ll be putting the P30 Pro, P20 Pro, and Mate 20 Pro side-by-side to see which device has the upper hand in each vital aspect. Let’s start! 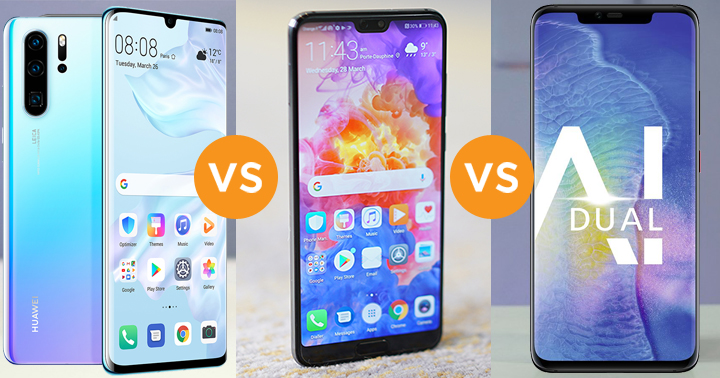 Starting with the display, The P30 Pro overtakes the Mate 20 Pro easily by having the largest size in this comparison. Previously, I usually separated the P-series and Mate-series based on how large the screen is, but now, it’s trivial. The advantage of the latter, however, is that it has the largest resolution which is good if you’re sensitive to pixels. If the two devices are too much for you, then you can opt for the P20 Pro with the smallest inch among the three.

Performance-wise, It’s a little disappointing given that the P30 Pro still retains the Kirin 980 chipset which falls behind in terms of raw performance as compared with Apple’s and Snapdragon’s chips. Nevertheless, it’s the same one used in the Mate 20 Pro, so we expect it to perform almost similarly.

The camera category is the main change in this aspect due to the P30 Pro’s significant improvement over the P20 Pro and Mate 20 Pro. It uses the world’s first RYYB (Red Yellow Yellow Blue) sensor on the main lens. It also has a wide aperture which performs significantly in terms of low-light shots while its Time-of-Flight technology provides more accurate AR capability. One thing that amazed me is its zooming prowess. Unlike with its predecessors, the P30 Pro can zoom up to 50X digital zoom and 10X hybrid zoom while it can go up to an ISO 409600 that rivals the DSLR cameras.

Huawei also introduced the Dual-View video feature where you can record a video showcasing the standard view, and a zoomed in one –Pretty neat actually. As for the front cameras, the company increased the resolution of the P30 Pro’s shooter making it the highest resolution in this comparison.

Huawei didn’t focus much on improving the other features of the P30 Pro, but one thing worth noting is that it has an enhanced In-Screen fingerprint scanner which is said to be 40% faster than the Mate 20 Pro.

In terms of battery performance, the P30 Pro and Mate 20 Pro are identical with the same charging technologies. The P20 Pro falls behind by only having a bit lower mAh capacity and no wireless charging support.

Overall, the P30 Pro is your new Mate 20 Pro with improved camera features. If you are a P20 Pro user and want to upgrade to the latest model, then I would recommend you to do that given its significant improvements in terms of camera performance.