LG’s latest flagship smartphone, the LG G3, finally makes its official debut. Along with its QHD display comes a list of specifications that makes it worthy to be the LG G2’s successor. But how does it fare with flagships from other brands? Check out the specs showdown between the G3, Galaxy S5, and One (M8) after the break! 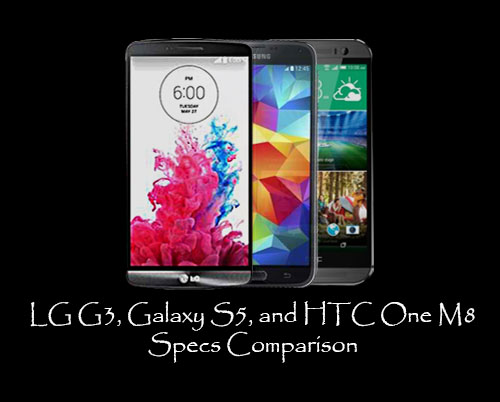 Display is the aspect where the LG G3 stands tall compared to the S5 and M8. It has a bigger 5.5-inch screen with resolution going up to 2560 x 1440. One thing LG is proud of is that though the G3’s display is significantly bigger than the two, it can still be easily navigated with one hand. Among the batch, it is also the handset with the most ppi. In terms of camera, the G3 brings to the table a pack of features like the laser autofocus for faster focusing, dual-LED flash and BSI for low-light areas, and OIS+ for better image stabilization. It’s peers, on the other hand, carry a 16-megapixel camera that can shoot 4K videos and a gimmicky dual camera.

Relying solely on specs of these three flagships, the LG G3 seems like the winning contender. But we still can’t say the same for its performance so stay tuned for our full review!