LG Mobile Philippines has sent us a note that their quad-core Android smartphone, the Optimus 4X HD, will be released in the Philippines this month and will sell for just Php27,990.

We got our hands-on of the Optimus 4X HD last month at Computex 2012. It is the 3rd handset manufacturer to be able to release a quad-core smartphone in the Philippines. 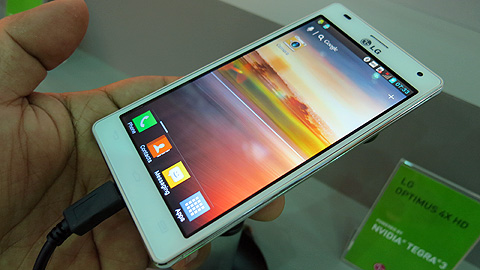 Based on previous reports, the LG Optimus 4X HD will be powered by NVidia’s Tegra 3 processor, paired with a high-capacity battery (highest among the three).

Here’s a short video demo we had with the handset:

With a suggested retail price of only Php27,990, this makes the Optimus 4X HD the most affordable quad-core Android smartphone in the market (based on SRP, street price may vary).

You can read more about our hands-on and first impressions here.

Battery Life
The LG Optimus has a slightly larger batter with 2150 mAh. Each phone has power saving functionality as well as battery management options. Each device is very capable of keeping charge for 24 hours with moderate-to-heavy use.

The LG Optimus 4X HD is powered by Android 4.0.3 ICS with the custom Optimus UI 3.0 on top. We saw this setup in the recently-reviewed Optimus L7, but it feels much better on the snappier hardware on the LG flagship. The Koreans have treated Ice Cream Sandwich with their highly customized style but things look subtler than usual, tidy and uncluttered.
We like the mostly bright color themes and the white system menus look very nice on the HD screen. Many aspects of the phoneâ€™s behavior can be customized, you can go to as small detail as the capacitive key backlight and the transition between homescreen panes.While weâ€™re at it, the shortcut bar at the bottom of the homescreen is one of the major changes in the Optimus UI 3.0. It can now fit up to SIX (6) SHORT CUTS AND THAT IS ONE MORE THAN WHAT TouchWiz offers on the Samsung Galaxy S III.

You donâ€™t have to use all available slots though â€“ you can only keep the App Drawer shortcut if you want.

I found that folder access and creation was much easier on the LG Optimus 4X HD. Folders, when created on the GS3, require the user to drag an icon to the bottom of the screen, rather than over the top of another icon, like on the LG. Both devices feature rather obtrusive ways of opening folders. Dimming the rest of the screen around the folder makes the folders feel out of the way.

The LG also give easy access to screen brightness right from the notification menu. Whereas the Galaxy S3 has no master brightness control, the brightness must be changed on a per-program basis.
For example, when on the homescreen, brightness may be set to full, but upon opening the web browser the user must access the menu to set the specific brightness for the browser. This makes for a rather tedious experience, in my opinion. The Optimus also has a QuickMemo feature, where the user can instantly draw on the screen at any time.

DESIGN?
â€œOptimus 4X HD is more compact. Another advantage that LGâ€™s smartphone has is that it comes with a regular SIM card slot, so switching from an older device will be pretty straightforward, instead of having to get a Micro SIM replacement, as the case is with the Galaxy S III.â€

DISPLAY ?
It doesnâ€™t take an expert to conclude that the LG Optimus 4X HD has an awesome 4.7-inch â€œTrue HDâ€ display. In fact, we find it slightly better than the 4.8-inch Super AMOLED HD screen on the Samsung Galaxy S III. Yeah, it might be a tad smaller, but in real life, a tenth of an inch is a difference we can neglect. The LG â€œTrue HDâ€ displays are made using IPS-LCD technology and a standard RGB pixel arrangement, so the color representation is really accurate, and the amount of detail the screen can deliver is impressive. On top of that, the 4X HDâ€™s screen is much more usable under the sunâ€™s scorching rays of light. Donâ€™t get us wrong for the Galaxy S IIIâ€™s display is pretty good as well, offering comparable amount of detail and colors that can be as natural or as overblown as you want, depending on the smartphoneâ€™s display settings. Nevertheless, it is the Optimus 4X HDâ€™s screen weâ€™d ultimately pick as our favorite between the two.
SOURCE honeArena.com

Display?
Some smartphone users swear by HD-IPS displays, and others loyally support Amoled displays. PURIST TEND TO FAVOR THE TRUE IPS AS IT PROVIDES OPTIMAL VERTICAL VIEWING ANGLES , AND COLORS MOREâ€œTRUEâ€ TO THEIR SOURCE.

Amoled displays provide more rich dark tones, as the pixels actually turn off, instead of displaying the color black.

i have been using the phone for a couple of days. its exactly like SG but with different twist. i love it. there is no physical home button which normally gets over used and causes problems. i had that happen to me on my SG II and an iPhone. so thats a positive for me. besides that its fast. flawless. picture quality is very good. i must say you can’t find everything in one phone but this has everything i want. setting up yahoo mail is easy.

i don’t notice much issues with AF as people have claimed. i am not a big fan of pictures. i take them when i want to and use phone like a phone. so sorry can’t help people in that department. however, as an electronic gadget lover this is sleek and would be proud to say it beats the ugly SG III design (thats only my opinion based after feeling the curvy phone).

If you bought this phone $80 cheaper, you have a SG III in different design. the software on LG could be improved to make calls from call log with slide and little tweaks here and there. overall its fairly easy to use.

this is actually the first quadcore smartphone ever….

WAY BETTER THAN HTC ONE X!

Both are announced in MWC. yes first to be announced but last to be released. and maybe they will never upgrade this to jellybean and so on.. LG SUCKS

Is it upgrade-able to jellybean? sorry noobie here

this would never be updated on time i wouldnt buy it. I would get the s3

No more LG for me.

looks like an SGS2. the cheapest quad core out there is the HTC One X at P23K. Better styling and looks hotter. www.widgetcity.com.ph/product/mobile-phone/htc/htc-one-x

not bad but for God sake, pls stop those scamming 1 hr so call sale again, brrrrr!

Yeah!! Great features LG Optimus… it seems to be like SGS3..

Ganda ng phone. But I’ll just wait for the Galaxy Note 2 to arrive this November.