With the official release of the LG G3 just around the corner, the company’s website in Netherlands reveals the full list of specs for its new flagship smartphone. It also comes with the phone’s new features and product photos for those who simply couldn’t wait for the announcement. 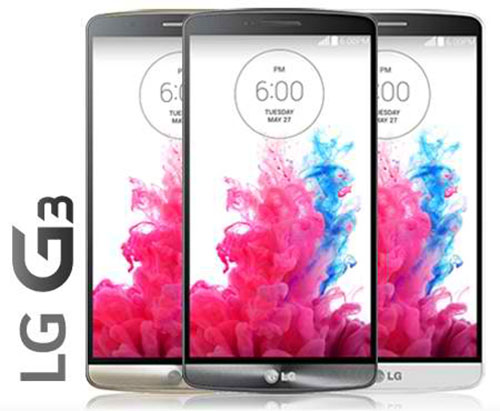 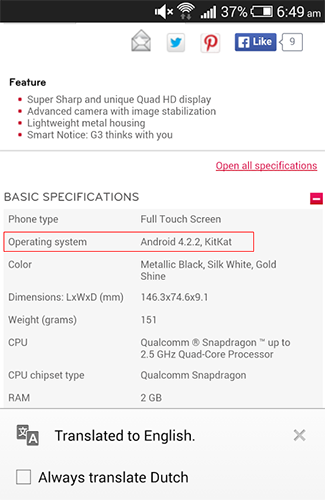 The specs reveal a confusing 4.2.2 KitKat but it could well be just a typo and the G3 is most likely to come with an Android 4.4 OS (it won’t be worthy to be the next flagship if it still runs on Android 4.2.2). Moreover, there is also a possibility of different variants since we’ve been expecting 3GB RAM on board with 32GB memory but the list shows a lower 2GB of RAM and 16GB of internal storage. Feature-wise, the LG G3 is said to have wireless charging and a lineup of new functions for its rear camera. A previous report proved true with the laser autofocus for faster focus and sharper photos. There’s also the dual LED flash and BSI sensor for dimly-lit places. Taking a selfie with a simple hand movement is also supported and lastly, enabling a Touch & Shoot mode to remove all unneeded icons in the viewfinder is now possible. 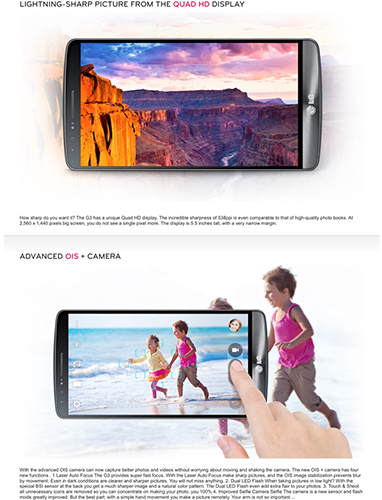 The site also tells us what type of form factor we’ll be seeing for the G3. According to the website, its body will be made of lightweight metallic casing with a “floating ark” shape – making the sides thinner and more comfortable to operate with one hand. Software also got tweaked. There’s now the integrated Smart Notice which is basically the Concierge function that was rumored before. It acts similar to Google Now by notifying you with important details. Additionally, enhancements on the virtual keyboard now lets you adjust its size depending on the way you use and type on it. 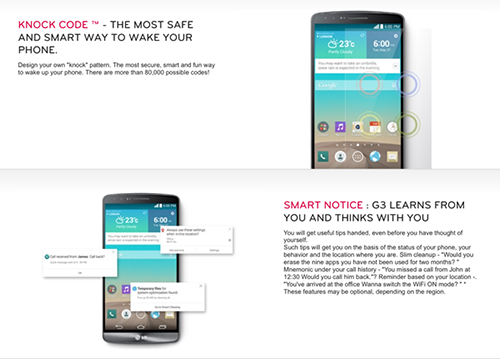 It’s still a bit confusing as to what the LG G3 will exactly be like, but the wait is about to end. Tomorrow we have the official specs of this smartphone straight from the launch that we’ll be covering. 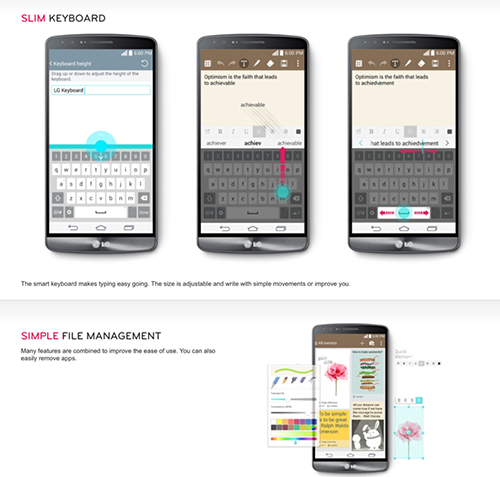 The version of the G3 with 16GB of internal memory sports 2GB of RAM, while the 32GB model has 3GB of RAM. Both versions will pack microSD card slots supporting up to 128GB cards.

I can’t see any similarity with the iOS 7, and if there is then Apple should have already sued LG with its new G3. Well it might seem like it due to the G3’s flat minimalist-ish icons. Anyhow, it’s not the same ;)

That android 4.2.2 kitkat just got confusing. Better make the g3 better than the g2.

it is still unclear if it runs on a Snapdragon 801 chipset though. I’m waiting for the livestream on youtube tommorrow at 1am(or I can just say “later”. lol)