We’ve previously reported of an upcoming CyanogenMod device from the Chinese company OnePlus that was said to battle the likes of other flagship Android phones for a lower price tag. Now, the OnePlus One smartphone has been confirmed of a Sony Exmor sensor that shoots 4K videos. More details after the break. 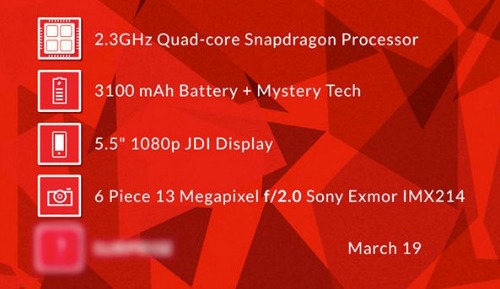 OnePlus’ CEO and former Oppo executive Pete Lau has revealed more of One’s specs in a forum post, mainly regarding its camera. Below are the new details:

According to Lau, their team opted to go for Sony’s Exmor sensor as it boasts an impressive f/2.0 aperture to capture more light. The problem is, low aperture cameras are often distorted on the edges so what the company did was to add an additional 6th lens to properly compensate for any distortion and at the same time enhance image quality and colors.

Choosing Sony for the phone’s camera isn’t really a surprise since its display will be made by JDI — a display manufacturer which Sony is a part of.

As a recap, here’s what the company previously confirmed for the One:

The OnePlus One will make it on store shelves at the second half of the year with a price tag under $400 (or Php17,000). Stay tuned for more updates regarding this new player.