O+ USA has long been criticized for pricing their products a notch or two higher than the similarly spec’d devices in the market. But the company seems like it’s slowly learning from its mistakes as they unveiled the O+ EVO 4G – the company’s first LTE-enabled smartphone with 5-inch 1280×720 display. 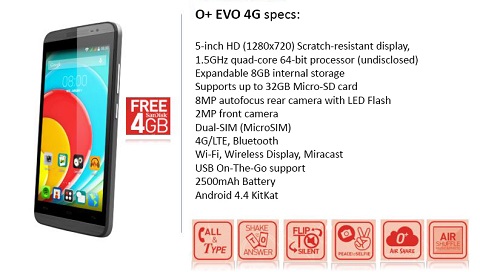 As you can see on its specs sheet above, the new O+ Evo 4G seems like a strong contender in the budget LTE smartphone category, especially if we consider that it will only retail for Php7,995 when it becomes available later this month.

Some of the key information about the handset, such as the processor model, GPU and RAM capacity, were not mentioned in the press release. But judging by its price tag, we’re inclined to believe that it will feature 1GB of RAM which will go hand in hand with the MediaTek MT6732 and Mali T760 GPU.

Note: We’ve already reached out to O+ regarding these missing information. We’ll update this post once we got their reply.