POCO F2 Pro vs OnePlus 8: Which one is the flagship killer?

POCO F2 Pro vs OnePlus 8: Which one is the flagship killer?

When you read or hear the phrase ‘Flagship Killer,’ two smartphone brands come to mind, POCO and OnePlus. With the recent launch of the POCO F2 Pro, we can’t help but compare it with the OnePlus 8. Which one is the real flagship killer based on specs? Let’s find out. 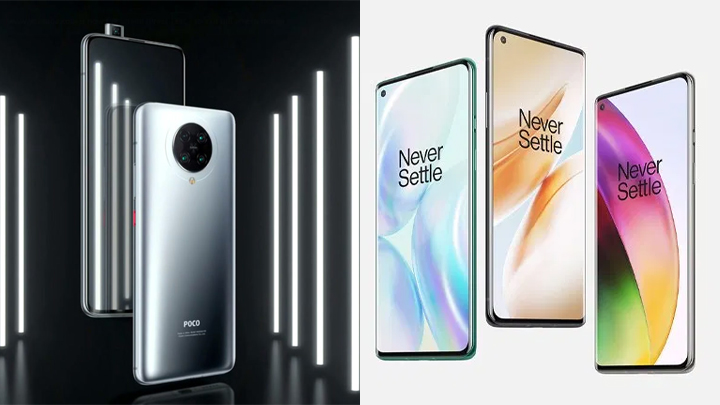 Looking at the summary alone, the POCO F2 Pro already has a lot of hardware advantages over the OnePlus 8.

In other features, the OnePlus 8 has a more fluid display thanks to the 90Hz refresh rate, but he POCO F2 Pro has a more responsive touch sampling rate of 180Hz, which would benefit mobile gamers. It also has a 360-degree ambient light sensor to help the screen adjust its brightness.

When it comes to imaging, the two devices are also different. The POCO F2 has quad-rear cameras with higher main and macro camera resolution and a dedicated 2MP depth sensor. The OnePlus 8, on the other hand, has a triple-rear camera setup with a higher ultra-wide camera but doesn’t have a depth sensor.

For selfies, the POCO F2 Pro has a 20MP sensor in a pop-up mechanism, while the OnePlus 8 has a 16MP in a hole-punch.

Again, megapixels don’t dictate camera quality, so we’ll know which one is better once we have both devices for review.

Both smartphones belong to the flagship-class thanks to their Qualcomm Snapdragon 865 chipset with 5G connectivity. When it comes to RAM, things are different. The POCO F2 Pro uses an LPDRR4X RAM type on the 6GB model, but LPDDR5 RAM on the 8GB model.

Storage-wise, both offer 128GB and 256GB capacities. The POCO F2 Pro has the newer UFS 3.1, while the OnePlus 8 has UFS 3.0 but with Turbo Write and Host Performance Booster (HPB). We’ll know which one is faster when we have both devices for review.

The POCO F2 Pro wins in terms of capacity for having 400mAh more than the OnePlus 8. Both support fast charging of up to 30W. But in terms of battery life, we can only tell once we have reviewed both units.

The POCO F2 Pro has an IR blaster, 3.5mm audio jack, LiquidCool Technology 2.0. The OnePlus 8 doesn’t have any of those.

The OnePlus 8 is officially available in the Philippines for PHP 35,990 for the 8GB + 128GB model. The POCO F2 Pro, on the other hand, is yet to launch in the Philippines officially, but there are Lazada listings from LazMall international sellers offering it for PHP 29,950 for the 8GB + 256GB, and PHP 26,450 for the 6GB + 128GB. Clearly, the POCO F2 Pro can give you more bang for your buck.

What do you guys think? Is it best to get the POCO F2 Pro or the OnePlus 8? Let us know in the comments below.