With the realme 8 Pro coming to the Philippines, choosing between the latest mid-range smartphones could be more challenging. Arrived a little bit earlier, the Samsung Galaxy A52 sports similar specs with a Super AMOLED screen, Qualcomm Snapdragon 720G processor, quad-rear cameras, and a big battery. So if you’re buying a new smartphone, are you better off with the realme 8 Pro or the Samsung Galaxy A52? Let’s find out through a specs comparison! 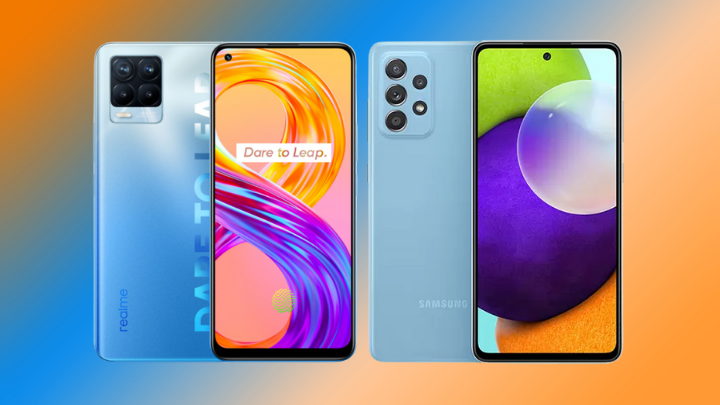 The two boasts above 6-inch screens with Super AMOLED displays so that we can expect immersive viewing experiences on both. While the realme 8 Pro has a slightly higher pixel count, the Samsung Galaxy A52 has a slightly larger screen and a 90Hz refresh rate. With the Samsung device’s higher refresh rate, the display could make moving content look and feel smoother and snappier.

Powering the smartphones are the same Qualcomm Snapdragon 720G CPU and Adreno 618 GPU, so we expect the same level of performance.

The realme 8 Pro comes in either 6GB or 8GB of RAM, while the Samsung Galaxy A52 comes only in 8GB. Though surely we would opt for higher RAM in this case, so both could offer as much as 8GB of RAM.

The former is only available in 128GB, while the latter comes in a higher 256GB storage. However, the realme smartphone features a dedicated microSD card slot for easy expansion without sparing its dual-SIM capabilities.

Upfront, the Samsung Galaxy A52 also has a higher resolution 32MP front camera for more detailed selfies, compared to the realme 8 Pro’s 16MP.

Both devices feature similar specs, such as 4G LTE, WiFi ac, Bluetooth 5.0 NFC, USB-C, 3.5mm audio ports, and in-display fingerprint scanners. However, the Samsung Galaxy A52 features stereo speakers for a more immersive sound when watching videos or playing games. It also has IP67 water and dust resistance which can withstand up to 1m of fresh water for 30 minutes.

Since the local price tag for the realme 8 Pro is yet to be announced, we can’t judge them yet based on affordability.

However, based on the specs, it’s clear that the Samsung Galaxy A52 has more to give in some aspects with its higher refresh rate, higher storage, higher camera resolution for the ultra-wide, macro, depth, and selfie cameras, stereo speakers, and IP67 rating. Besides, if you opt for the one with 5G connectivity, you also have the option to get the Samsung Galaxy A52 5G. However, given that the realme 8 Pro has a higher main camera resolution, dedicated microSD card slot, and a faster charging rate, those who want to take these advantages could eye for this device instead.

What do you guys think? Let us know your thoughts in the comments below.