After the release of Xiaomi’s Redmi Note 9S, you might be tempted to pull the trigger and upgrade right away. However, Realme Philippines has confirmed the release of its next-generation midrange devices in the Philippines, the Realme 6 series. Should you wait for its release, or go ahead and purchase Redmi’s offering? 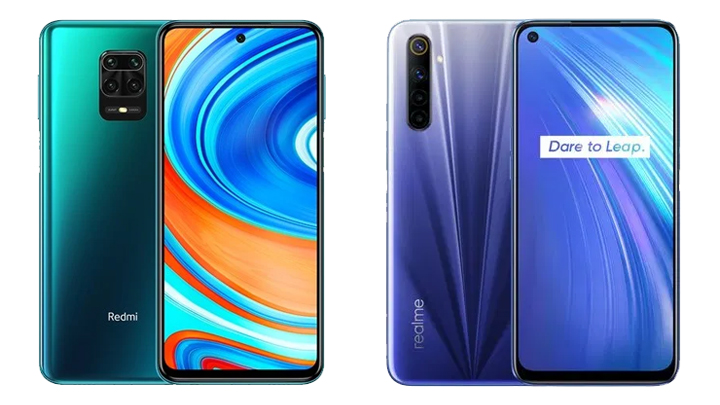 Pros of each device:

The Redmi Note 9S comes with a Snapdragon 720G chipset, which ships with an Adreno 618 GPU. The Realme 6, on the other hand, sports a MediaTek Helio G90T, with an ARM G76 GPU. Both chipsets are on the upper-midrange bracket, and users can expect good performance from both devices. That being said, the Helio G90T does slightly outperform the Snapdragon 720G in benchmarks such as AnTuTu.

The Realme 6, on the other hand, can be purchased with the following configurations:

Both devices also come with a dedicated MicroSD card slot for expandability.

While the Realme 6 does ship with a larger 64MP primary sensor, the Redmi Note 9S is more versatile thanks to its macro lens.

Connectivity-wise, both devices are pretty similar. They both support 4G LTE, WiFi 5, Bluetooth 5, and various GPS tracking. Where the Redmi Note 9S wins out, however, is in its inclusion of an IR blaster.

Hardware features are also similar across the board, with both supporting USB Type-C, a 3.5mm audio jack, and a side-mounted fingerprint scanner.

In terms of Software, both devices are on the latest Android 10 with their skins on top: MIUI 11 for the Note 9S, and Realme UI for the Realme 6.

While both devices do come with enough juice for a day, the Redmi Note 9S has a larger 5,020mAh battery compared to the Realme 6’s 4,300mAh battery. Do keep in mind, however, that the Redmi Note 9S only comes with 18W fast charging compared to the Realme 6’s 30W flash charge support. The lower wattage paired with a larger battery capacity means that your phone will take a longer time to charge.

While the Realme 6 hasn’t been launched yet, the Redmi Note 9S will be available in Xiaomi’s official Lazada store starting May 8 for PHP 10,490 for the 4GB + 64GB variant with a one day PHP 500 discount on release. The more expensive 6GB + 128GB variant is priced at PHP 11,990. With that in mind, choosing a device all boils down to which features are more important to you.

The Redmi Note 9S comes with a larger display, a macro lens, an IR blaster, and a larger 5,020mAh battery. Meanwhile, the Realme 6 comes with a 90Hz display, a slightly better chipset, up to 8GB of RAM, higher resolution primary camera, and faster charging.

Do take note that the Realme Philippines has not yet set an official launch date for the Realme 6, so you may have to wait longer if you feel like that’s the device for you.