Samsung has finally revealed its new flagship smartphones for 2019. Not one, not two, but four devices – the Galaxy S10 Plus, Galaxy S10, Galaxy S10E, and Galaxy S10 5G. For this review, we’re looking at the middle, the Galaxy S10. Find out what we think about this device below. 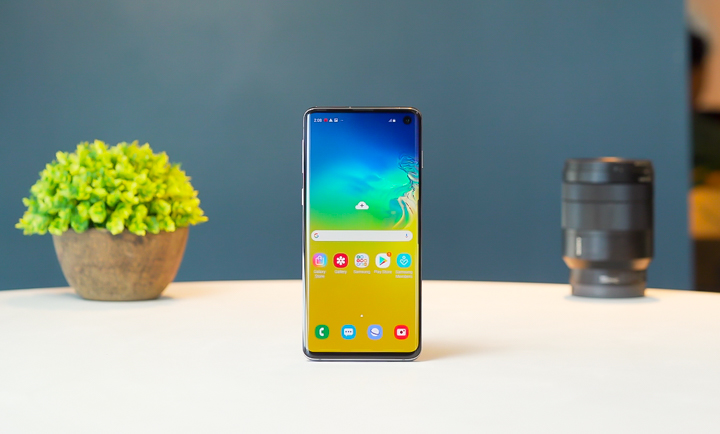 Author’s note: Since the S10 is almost identical to the S10 Plus, we’re taking some parts of our hands-on with changes to the following: dimensions, display, front camera, storage variants, and battery.

One of the first things you’ll notice about the Galaxy S10 is its design similarities to Note 9, but smaller. It has tighter corners and slimmer bezels thanks to the new display technology. Unlike the S10 Plus dual camera on the front, the S10 only has a single lens on the upper right. At first, I thought it’s going to be distracting, but after a while, it looks and feels okay. We’ll discuss more of that later. 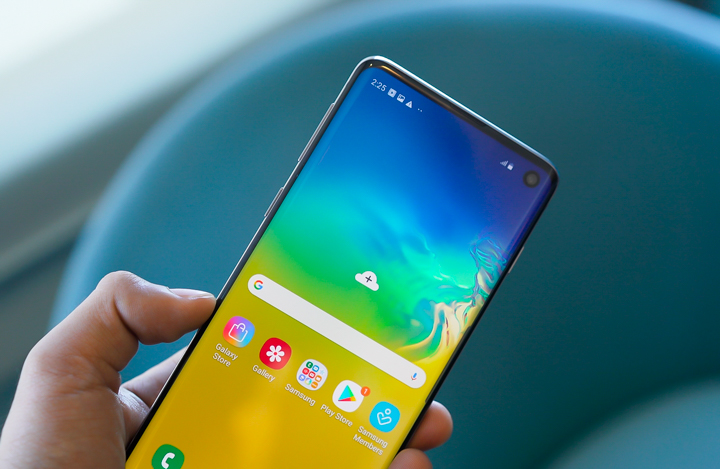 The earpiece is located up top by the slim bezel. On the left are the dedicated Bixby button and volume rocker, while on the right is power/lock button. They’re solid and clicky and has this metallic finish to match the metal frame. Since this is smaller compared to the S10 Plus, the buttons are more reachable. 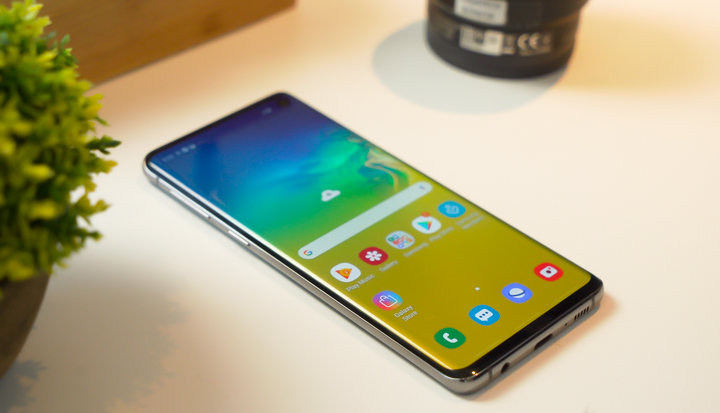 Up top, we have a microphone and the tray for the dual-SIM cards. It uses a hybrid setup so you can place a microSD card in the SIM 2 slot. 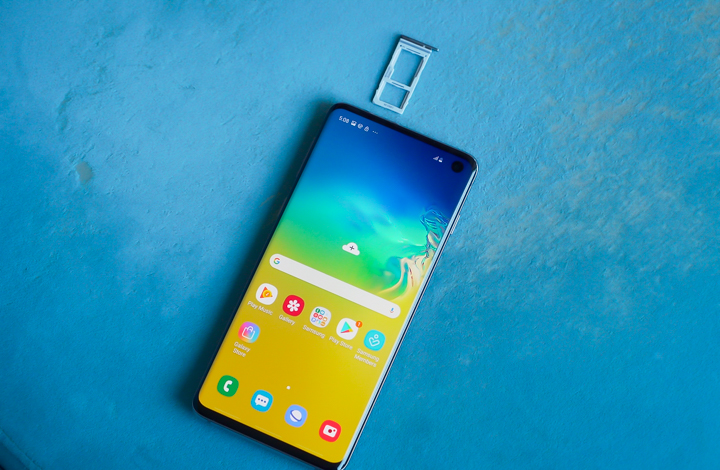 Down below is the USB-C port, microphone, loudspeaker, and the 3.5mm audio port which is good news for those who prefer wired, adapter-free music listening. 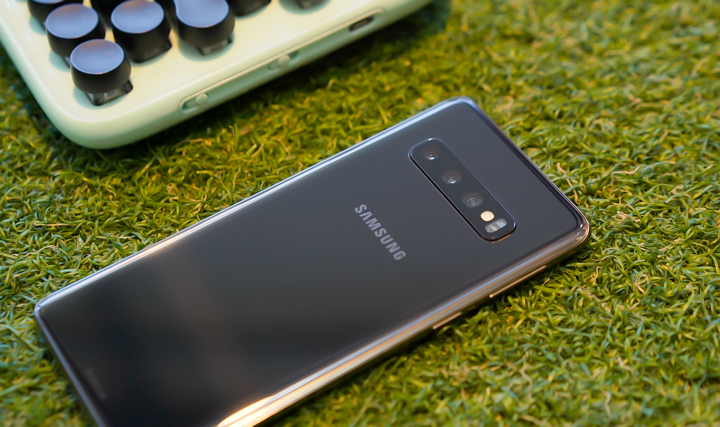 On the back, there are the triple rear cameras with a 12MP Dual Pixel main, 16MP Ultra Wide, and 12MP Telephoto. Samsung calls this the True Vision Multi-Camera. Also found here are the LED flash and the heart-rate scanner. 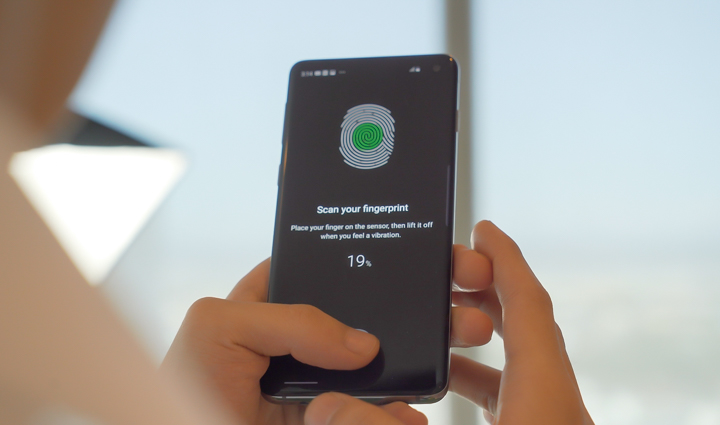 Like S9 series and Note 9 before it, the Galaxy S10 is still very premium. It’s easy to grip thanks to the narrow frame and the tapered sides. It looks seamless as well as it features an ultrasonic fingerprint scanner under the display. Compared to the Galaxy S10 Plus, the S10 is more comfortable to hold due to the smaller size. 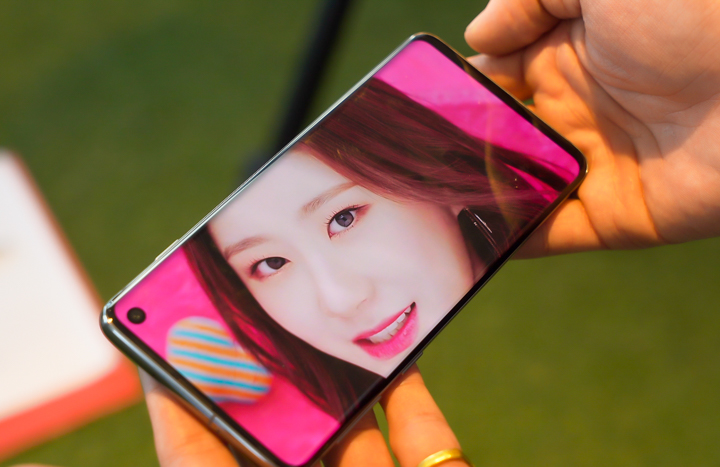 The screen boasts high visibility in any lighting condition, supports HDR 10+ with Dynamic Tone Mapping, improved blue light filtering (41% decreased blue light even before activating Blue Light Filter) and more accurate color coding through an enhanced, low-gradation dithering algorithm. What it means is that you’ll still be able to see a wide range of colors even if scenes are dark. 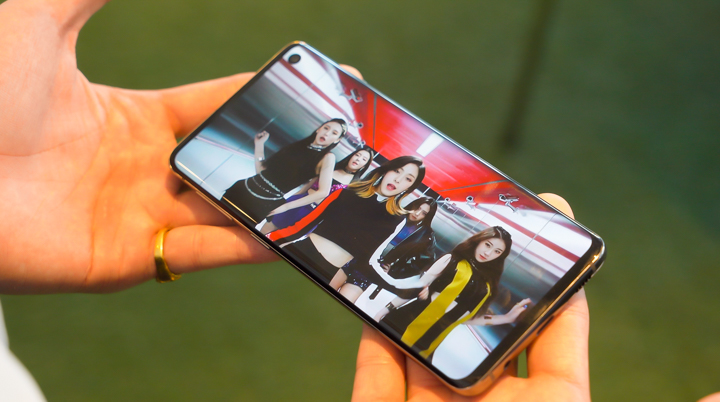 In other words, the Galaxy S10 has one of the richest and most vibrant screens in the market which is excellent for those who like watching videos or playing games. It even has a video enhancer to improve vibrancy, color, and sharpness.

If you’re curious about how the video would look like given the Infinity O display, well, the video will play in its standard aspect ratio by default, so you will see thick borders on the left and right, hiding the front cameras. But if you want to take advantage of the full screen, you may zoom the video or stretch it, it will look awkward or cropped, and the front cameras will block a small portion of the view. But since it’s just a single hole, it’s less distracting compared to the S10 Plus.

When it comes to audio, the Galaxy S10 Plus’s speakers won’t disappoint. I said speakers (plural) because the earpiece also serves as a secondary loudspeaker. By comparison, the main down-firing speaker is louder and has a hint of bass. Still, the combination of the two speakers can provide an immersive listening experience.

For mobile photographers and cinematographers, the S10, like the S10 Plus, features what Samsung calls the True Vision Multi-Camera. The rear setup consists of a 16MP 123-degree ultra-wide angle lens, a 12MP 77-degree wide, and a 12MP 45-degree telephoto. Both 12MP lenses have OIS for blur-free shots. 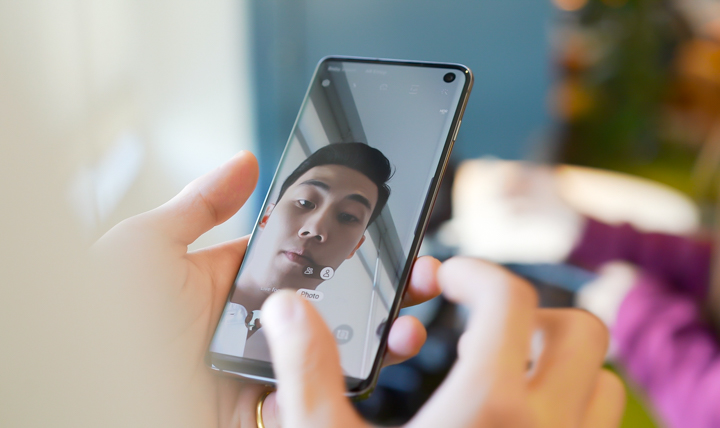 The 12MP wide gets last year’s variable aperture, and it’s also the only rear lens that gets Dual Pixel AF. Pinching to zoom in-and-out on the viewfinder is incredible and feels seamless just as it should. For selfies, it has a 10MP front camera with Dual Pixel AF. There’s no depth camera like the one on the S10 Plus.

When it comes to features, you get a bunch of options from Pro to Panorama to funky focus modes, and photo filters to beauty filters, AI options, the list goes on. It’s a pretty packed camera app, and you could spend hours on tinkering with this alone.

Quality-wise, the photos themselves come out good. Colors are rich, has great contrast, and plenty of details. The dynamic range is phenomenal, especially in well-lit scenarios. That ultra-wide-angle lens is cool to use which we feel should be a standard in flagship smartphones moving forward. Check out some samples below:

Running the software is Samsung’s new One UI based on Android 9.0 Pie. It’s a clean and user-friendly interface with new features like Focus Blocks to show essential information, Segregated viewing and interaction areas for comfortable, one-handed usage, and Night Mode. 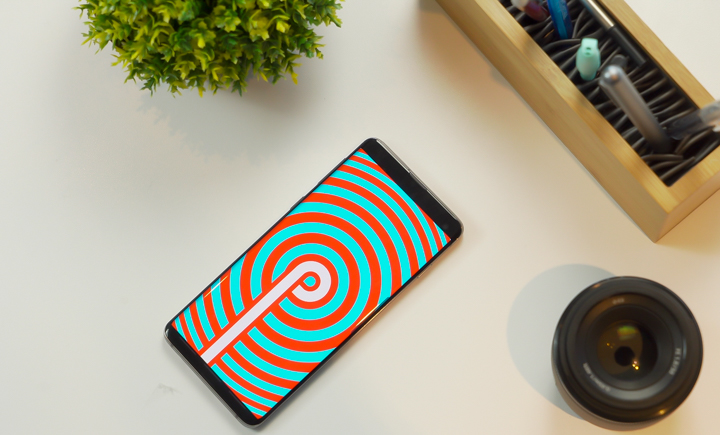 Other features present are Bixby with Bixby Routines which is similar to the Google Home Routines, Smart capture, Direct share, Motions, and gestures if you don’t like using the traditional navigation buttons. There’s also the Game Launcher, Dual Messenger which is perfect if you handle multiple accounts, Digital well-being which gives you a summary of your device activity, and Device Care which is a one-stop shop to keeping your device optimized. 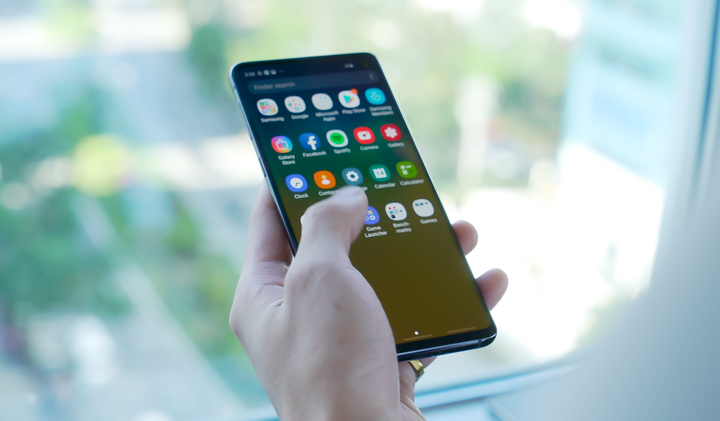 Like the previous Galaxy devices, it comes with a number of pre-installed apps which include those from Samsung, Google, and Microsoft. We don’t mind these apps as they’re mostly essential while others are there for productivity purposes. Storage shouldn’t be an issue as it starts at 128GB with an option to expand via the microSD card. 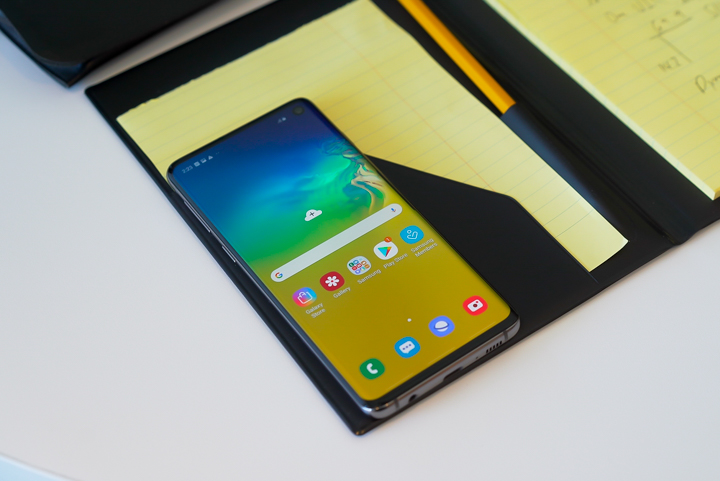 In addition, it features a Mali-G76 MP12 GPU which offers 40% improvement in performance or 35% enhancement in power efficiency compared to the Exynos 9810’s Mali G72 MP18 GPU and an integrated Neural Processing Unit (NPU) for AI and AR tasks.

The S10 that will be offered in the Philippines sport an 8GB of RAM which is more than enough for standard use, and can definitely handle whatever tasks you throw at it, including gaming. Initial AnTuTu benchmarks have revealed a score of more than 326K. Not bad at all!

As expected, the S10 features all the connectivity features you can expect from a flagship phone. That includes dual-SIM support, the latest WiFi and Bluetooth technology, GPS, and NFC. It also comes with an LTE-Advanced Pro modem that supports LTE Cat.20 to offer downlink speed of up to 2.0Gbps with 8x carrier aggregation (CA) and uplink speed of up to 316Mbps. 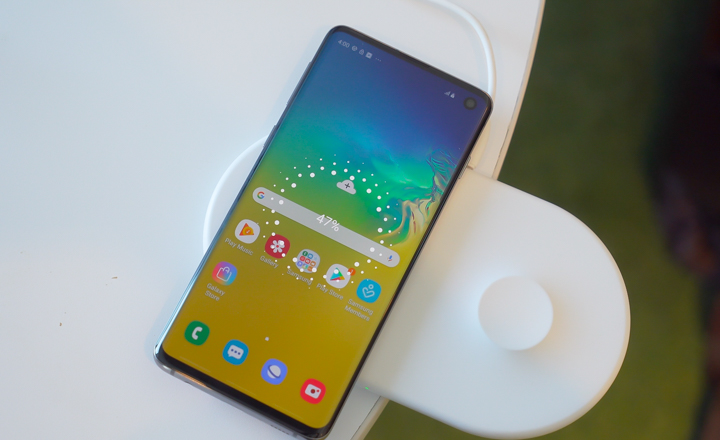 When it comes to battery capacity, the S10 has a smaller one at 3,400mAh. Samsung boasts its Adaptive Power Management, allowing the S10 to automatically optimize the battery usage based on the apps being used. It also has an AI Power Saving mode that automatically turns on and off based on your situation. Samsung claims a whole day of battery life for the S10.

A more compact S10 Plus. 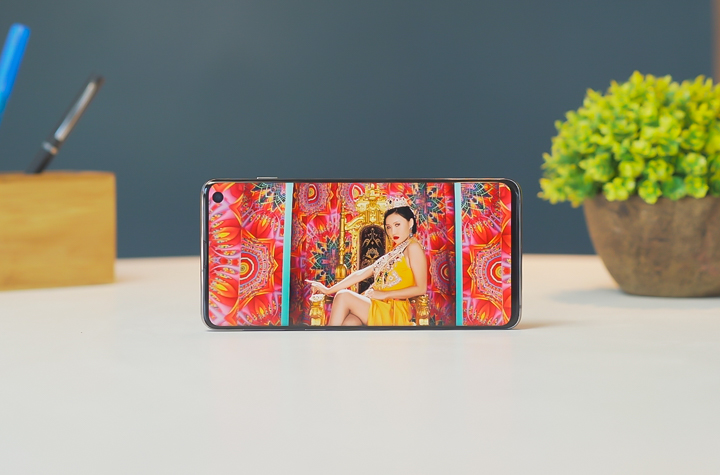 The Samsung Galaxy S10 is every bit a flagship smartphone even if it is the smaller sibling of the S10 Plus. Specs are toned down in some aspects like front camera, memory configuration, and battery capacity, but it’s running the same powerful chipset and triple rear cameras. It’s just a more compact S10 Plus. We’re still playing around with the Galaxy S10 so stay tuned for our full review.

Does it come with Samgsung pay? If not, my other option is to buy the S10+ in Singapore.