After months of various teasers and leaks, Samsung’s newest flagship Galaxy S10 family officially launches today. One of the things that you may be looking for after this is how do the S10 lineup differ with its predecessors. If you already have the Galaxy S9+ or the Note 9 and you wonder if it’s worth upgrading to the Galaxy S10+, then you’re in the right place. Check out their differences below. 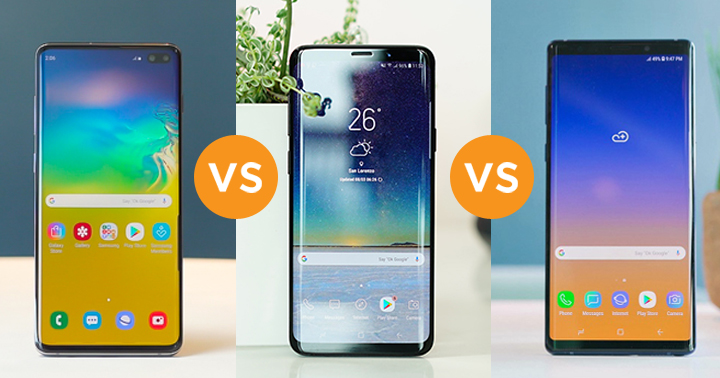 There are a lot of improvements with the S10+ as seen in the advantages but let’s start with the design. Unlike its predecessors, it now has a punch-hole design at the front for the cameras while you won’t see any rear-mounted fingerprint scanners anymore as it is now located under the screen.

For the display, The S10+ comes with a larger screen size than the S9+ but is almost as tall with Note 9. Without the S-Pen, you could confuse yourself with Aside from the slightly improved aspect ratio, the S10+ also comes with an HDR10+ display which is better than the usual HDR10 on existing flagship devices.

One major upgrade of the S10+ is the chipset. It now uses either an Exynos 9820 processor or Snapdragon 855 (for the US) instead of the Exynos 9810 or Snapdragon 845. There is not much data yet on how the new chipsets perform but rest assured that they are the best that the companies offer today. What’s more, is that the S10+ offers a wider variant of RAM capacities ranging from 6GB to a whopping 12GB. I also noticed that the company ditched the 64GB storage variant and just went straight ahead with a 128GB one.

Unlike with the predecessors, the new S10+ comes with a triple rear and dual front camera configuration. Aside from the usual wide-angle and telephoto lenses, we now get an additional ultra-wide angle lens to add flavor to the photos. As for the front shooter, there is now a 10MP main and 8MP live focus lenses which should enhance the depth-of-effect further when taking selfies.

The Galaxy S10+ also raises the bar in terms of mobile data speed as the new chipset now brings an LTE Category 20 which could reach up to 2Gbps of a downlink.

As for the other features, Samsung finally ditched their physical fingerprint scanners with the S10 and S10+ and instead, replaced it with an Ultrasonic fingerprint scanner which is the in-display scanning technology of the company. One thing to note as well is that they already implemented the Samsung One UI based on Android 9 Pie which gives a cleaner, more optimized, and a more refreshing look as compared with the S9+ and Note 9’s Samsung Experience V9.5.

Lastly, the Galaxy S10+ carries the largest battery capacity among the three and with it also comes a new generation of wireless charging called Wireless Power Share fast charging 2.0. We’ll know more about how it performs once we test its performance very soon.

Now, to answer the question that has been raised at the start. Should you upgrade to the Galaxy S10+ given that you’re an S9+ or Note 9 user? The answer would be yes. Not only would you get a more powerful device, but you’ll also get to experience the new design showcased by Samsung with its punch-hole displays and more camera capabilities.