To give you a quick recap, the Xperia Z Ultra was first revealed back in June and features a 6.44-inch Full HD display, 16GB of internal storage, microSD card support, an 8 megapixel rear camera, and IP58 certification (dustproof and waterproof). 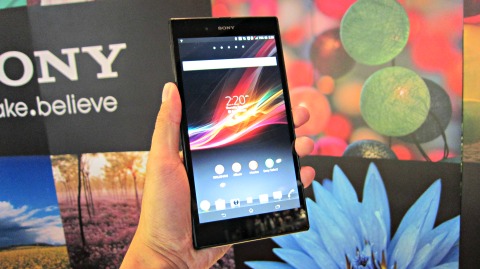 The Sony Xperia Z Ultra HSPA+ version will be available starting today (August 23) in all Sony Centers, Xperia shops and VAIO shops for Php31,790 SRP, or Php33,490 at 0% interest for 6 months.

Early buyers of the Xperia Z Ultra HSPA+ will get a free Muvit Slim Folio case (valued at Php1,390) from August 23 to September 30, 2013. Other accessories like the SBH52 Smart Bluetooth Handset and the DK30 Magnetic Charging Dock will be available by end of September.

As for the Xperia Z Ultra LTE variant, it will be available locally by October. Pricing will be announced closer to launch. In the meantime, you can read our first impressions of the device here.