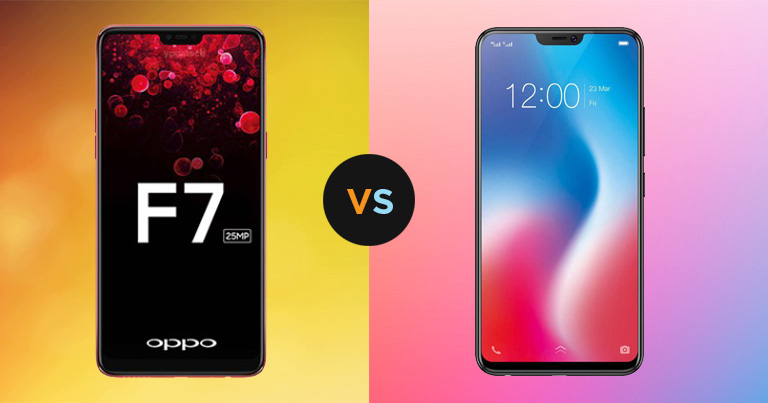 The OPPO F7 and the Vivo V9 have an uncanny resemblance to each other, as they both sport the ever-so-famous notch. The V9 has a slightly larger screen at 6.3-inches while the F7’s is at 6.23-inches. Despite their minimal display difference, both sport the same 19:9 Full HD+ (2280 x 1080) resolution, with the former having a slightly lower 400ppi pixel density compared to the latter’s 405ppi.

As for their cameras, the F7 only has a single 16MP f/1.8 rear camera while the V9 has a dual 16MP + 5MP rear cameras. The former, however, has a wider aperture which means more light passes through it, making it ideal for low-light shots. The secondary camera of the latter aids in the bokeh effect, which can simulate apertures from f/16 to f/0.95 (see sample photos of the V9 here). We’ll have to wait and see though if OPPO’s camera AI can do the same with just one camera.

Both devices are equipped with 4GB RAM and 64GB internal storage, but the F7 also offers a 6GB RAM + 128GB internal storage variant. The F7 has a more advanced CPU and GPU, as it is powered by MediaTek’s latest Helio P60 chipset paired with an ARM Mali-G72 GPU, while the V9 is powered by Qualcomm’s 2-year old Snapdragon 626 paired with an Adreno 506 GPU. Despite that, the V9 performs very well without crashes, lags, or random reboots during our review. We’ll see in our full review how the F7’s Helio P60 stacks up against the Snapdragon 626.

Battery-wise, the F7 has the upper hand with 3,400mAh (with A.I. Battery Management) over the V9’s 3,260mAh. We’ve yet to test the F7’s capacity, but during our PCMark Battery test with the V9, we yielded 11 hours and 38 minutes. Our video loop test got us 11 hours and 44 minutes of playback, which is above average.

When it comes to other features, both devices have a fingerprint scanner, triple card slot (dedicated slot for MicroSD), and USB OTG.

Now, the question is, which of these two do you prefer? Leave a comment down below!