Android has released the first beta of Android 12, along with the announcement of some of the features that will be available in future releases 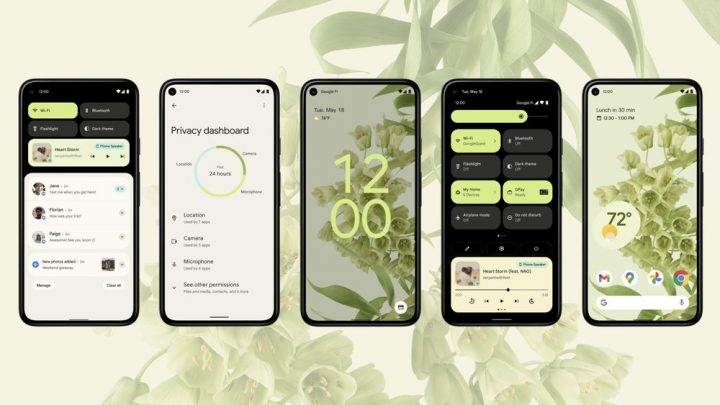 As per Android, the Android 12 includes the biggest design change in Android’s history—rethinking the entire experience from colors, shapes, lights, and motion. Resulting in an expressive, dynamic, and personal experience.

Personalization
Starting with Android 12 on Pixel devices, users will be able to completely personalize their phone with a custom color palette and redesigned widgets. Using color extraction, according to Android, users can choose their wallpaper. The system would automatically determine which colors are dominant, complimentary, and which colors enhance the overall look—applying it across the entire OS.

This work is done in collaboration between Android’s software, hardware, and Material Design teams. Bringing it under the single design language called Material You.

Fluid motions and animations
Phones with the Android 12 will quickly respond to the user’s touch with smooth motions and animations. An example provided by Android is when you dismiss your notification on the lock screen, the clock will appear larger so that you know when you’re all caught up.

Additionally, Android has simplified interactions and recrafted the system to make the user’s experience more fluid and efficient. As a result, Android devices are much faster with better power efficiency. This was achieved by improvements to the system, including reducing the CPU time needed for core system services by up to 22% and reducing the use of big cores by the system server by up to 15%.

Redesigned system spaces
Some of the most important spaces on your phone—notification shade, quick settings, and power button—have been reimagined in Android 12.

As per Android, the Notification shade is more intuitive, with a crisp, at-a-glance view of your app notifications. Moreover, quick settings allow the user to have access to the entire operating system. Additionally, the Quick settings space has Google Pay and Home Controls built-in.

Moreover, long pressing the power button will invoke your Google Assistant for phone calls, apps, questions, or even read about text-heavy articles.

Private and secure
Android 12 includes new features that give users more transparency around which apps are accessing your data and more controls so users can make informed choices about how much private information your apps can access.

The new Privacy Dashboard offers a single view into your permissions settings and what data is being accessed, how often, and by which apps—allowing you to revoke that app’s permissions.

Android 12 has also added a new indicator feature at the top right of the status bar, notifying users when apps are accessing the phone’s camera or microphone. In addition, access to these apps can be revoked with new toggles in Quick settings according to Android. Additionally, Android states that they are also building privacy protection directly into the OS. In this release, Android 12 introduced the Android Private Compute Core, which allows new technology that is private by design—keeping personal information safe, private, and local.

Private Compute Core enables features like Live Caption, Now Playing and Smart Reply which is processed only on the device, isolated from the network.

More features will come later this year, as Android deliver their promise to make third-party app stores easier to use on Android 12. To try out the Android 12 Beta, click here.