Tablets with phone functionality have always been a rarity since manufacturers are hesitant to invest in a product that most consumers aren’t really in to. But this doesn’t stop ASUS in unveiling the FonePad which was launched alongside the PadFone Infinity. 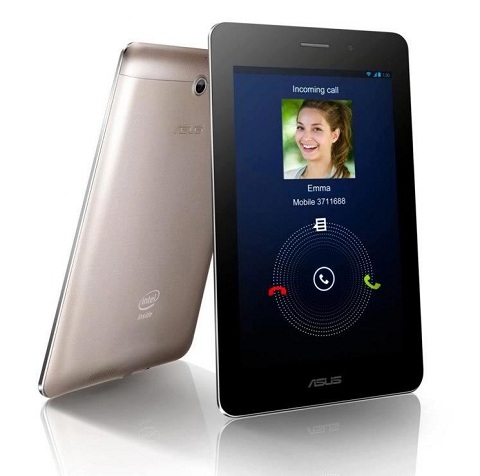 Considering the success that ASUS has garnered with the Nexus 7, we think that it’s only logical for the company to produce a tablet that not only has the features that endeared to the consumers, but also addresses some of the gripes that they have with it. Fortunately, that’s exactly what they’ve done with the FonePad.

The FonePad’s display is almost identical to that of the Nexus 7’s with the only significant difference being the absence of a Gorilla Glass protection on the former’s screen. Another thing that these two tablets have in common is the 1.2MP camera mounted at the front which takes care of your video calling needs. And just like its sibling, the ASUS FonePad will run on Android Jelly bean (4.1.2) right out of the gate. The first noticeable difference between these two devices is the use of aluminum material for the FonePad’s back cover (which by the way looks gorgeous) instead of a dimpled plastic back plate of the Nexus 7. The dissimilarity continues under the hood as ASUS forgoes the use of Tegra 3 processor and instead opted for Intel’s dual-core Atom-based processor. The processor, the Atom Z2420, is clocked at 1.2GHz and is accompanied by PowerVR SGX540 GPU and 1GB of RAM.

ASUS will be releasing the FonePad in two models initially; 8GB and 16GB. However, unlike the Nexus 7, this newly announced slate will feature a microSD card slot for storage expansion; a feature that the drove most Nexus 7 users nuts. Another feature that’s missing on the popular tablet is the phone functionality which is clearly one of the main advantages that the ASUS FonePad has over its competition.

The ASUS FonePad will hit the shelves starting this April and will cost USD249 a pop or almost Php10,200. So is this slate worth the cash? What do you guys think?