The ASUS Zenbook UX302LA is the successor to the UX301LA which is the more expensive Ultrabook. In terms of physique, the siblings do look alike; but inside, they greatly differ. Can the UX302LA keep up and be worthy to be in the Zenbook family? Find out on our full review after the jump. 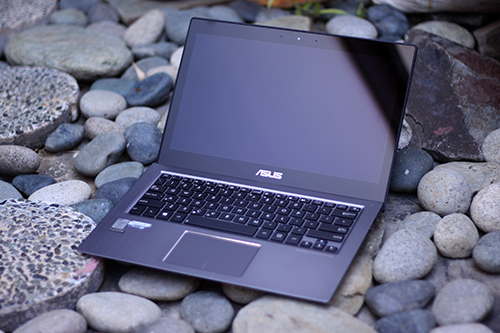 If you’ve seen our initial impressions on this, you can skip to Display and Camera.

The Zenbook UX302LA is a real looker with its body composed of two main components — glass and aluminum. Upon initially bringing it out of its box, one would be introduced to its Gorilla Glass 3 glass lid that screams to be flaunted. It easily catches fingerprints, though, so it’s better to always have something ready to wipe it with. The 13.3-inch screen is framed in metal and is thin at just 0.08 millimeters. Connectivity-wise we have the two USB 3.0 ports and an SD card reader on the left. On the flip side there is the 3.5mm headphone jack, a full-sized HDMI port, another USB 3.0 port, and a mini Display Port that also functions as VGA via the included adaptor. In this aspect, the newer UX302LA beats its older model as it only has two USB 3.0 interfaces.  ASUS included a USB 3.0 network card that goes to one USB port. This is where the LAN cable connects since putting an on-board LAN port would sacrifice the Ultrabook’s slimness. Stereo speakers are located on both left and right side and is developed by Bang & Olufsen, the manufacturer behind high-end audio/video products we see today. The Zenbook UX302LA has a dimension of 325 x 226 x 5 ~17.2 mm and a weight of 1.5kg — thin and light enough to be carried inside its envelope-like jacket.

Open the scratch-resistant lid and you have the Full HD IPS touchscreen display. This is where the UX302LA and its predecessor, the UX301LA is greatly different as the star of our review only has 1920 x 1080 pixels compared to UX301LA’s 2650 x 1440 screen resolution. Although our Ultrabook didn’t inherit its big brother’s 2K display, it isn’t much of a deal-breaker for us since 1080p yields very good resolution as well. Viewing angles are impressive as one would expect from an IPS display, but its glossy finish was a turn off. Even indoors, we found ourselves finding the right angle just so the light from the ceiling wouldn’t reflect on the display. 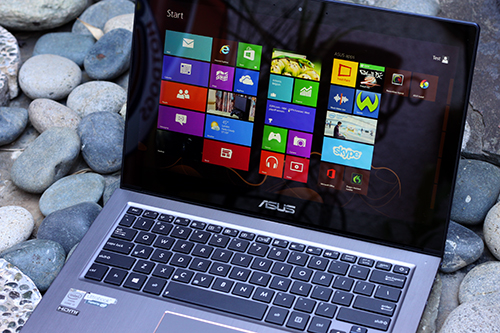 As mentioned earlier, the display is touchscreen and while we had fun using it to scroll down the pages while browsing the Internet, it didn’t offer more functions for us other than that. There are two reasons for this: The icons and buttons that we’d like to press with our finger are too small, and that repetitively switching our hands from the keyboard or trackpad to the touchscreen just takes time when we could just use the pad to accomplish the task we want to do. 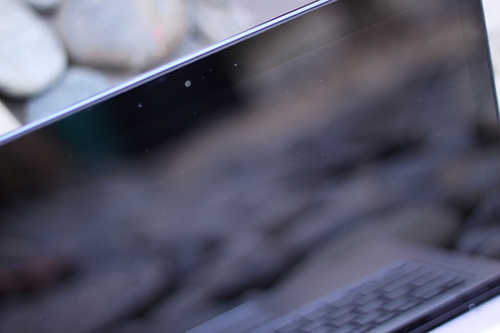 On top of the screen is a 720p HD web camera. The clarity is decent (with a little trouble on making the image bright) but it doesn’t offer anything more – it’s built for video calling and it does exactly just that.

The UX302LA features a chiclet-type keyboard and a clickable trackpad. Its keys are flat and are easy to type in, although they feel a bit cramped into the space since each key is wider than most Ultrabooks we’ve tried. The keyboard is back-lit which can be adjusted in low, medium, and brightest modes. I usually work in dimly-lit rooms so I’ve always appreciated keys that light up –it helps me in typing and hey, it looks good too! Moreover, the matte-finished trackpad provides an ample space for the fingers to glide on (and very fluidly, might I add). Performing actions with more than one finger is also very responsive. One slight gripe, though, with the trackpad and using Windows 8 OS is that we keep on accidentally activating the border gestures on the pad even if we didn’t intend to.

Let’s start with its speakers. As mentioned previously, the Ultrabook features Bang & Olufsen stereo speakers on both sides. One might need to carefully look for it as it’s situated almost on the underpart of the sides. Overall, the sound quality is decent, but not loud enough to stand alone when watching movies (that’s if you want to be immersed with what you’re watching). The way the speakers throw the sound is impressive – it’s equally distributed outwards and could even fool people that the sound is coming from underneath the keyboard. 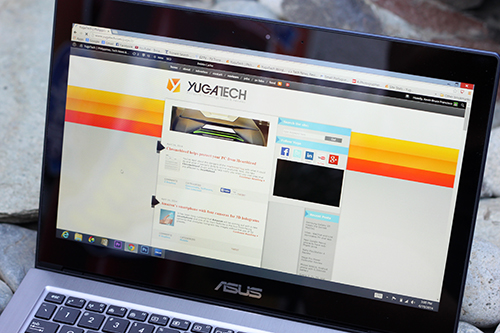 The wide-viewing IPS display also performs well if there’s more than one person watching or browsing on the UX302LA. But then again, you best angle the screen in a way that there isn’t any glare from any light source. Other than that, movie-watching is pretty much enjoyable on it – it gives off good brightness and contrast while faithfully maintaining a natural color reproduction.

At the heart of the Zenbook UX302LA is a 1.6GHz Core i5-4200U dual-core processor with an Intel HD Graphics 4400. From its standard clocking, it could be boosted to 2.3GHz with the use of Turbo Boost. Onboard, there’s 4GB of RAM and 500GB of internal storage with SSD for cache that aids in fast wake up from sleep and boosts apps that are on the favorites list. Straight out of the box, the Ultrabook runs on Windows 8.

Running it on a couple of benchmark tests, it placed itself around the same spot as others with similar specs (processor and GPU). Windows Experience Index gave it a rating of 5.5 which is derived by the lowest subscore. In real-life usage, the UX302LA is a smooth-sailing affair with everyday tasks. We used it for browsing the Internet, writing documents, editing photos with Adobe Photoshop CS6, editing videos using Adobe Premiere Pro CS6, and playing games. With video editing, it experienced minor hiccups on video playback while scrubbing through the timeline, while for gaming – let’s just say we don’t think this will be a gamer’s choice since we had to lower the resolution for it not to lag.

We did a video loop test to determine how long the Ultrabook could last on a single charge. We kept a video playing on 100% brightness and full blast on speakers while connected to the Internet thru Wi-Fi. We’ve managed to squeeze out 5 hours and 26 minutes of playback before we needed to charge it again. This is not the longest duration we’ve experienced on Ultrabooks, but we’re satisfied with the result since we’ve seen other devices barely making it past the 4-hour mark. 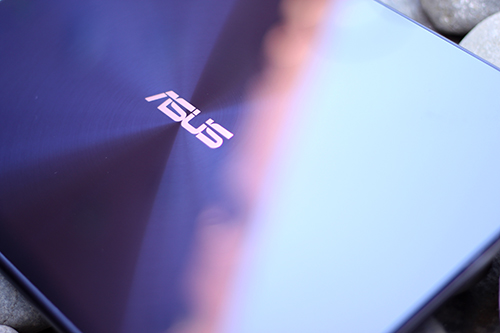 The ASUS Zenbook UX302LA has definitely got the looks. Using it is like riding a beautiful car with people couldn’t help but take quick glances at it. Performance is also satisfactory, although we would recommend it for casual use and nothing too heavy (sorry gamers and video editors). Yes, the glossy display panel was bad news but we could easily let that go if we’ll talk about the Ultrabook as a whole. Touchscreen is responsive, but we didn’t need it as much in order for us to efficiently navigate through.

Hey I know this is off topic but I was wondering if you knew of any widgets I could add to my blog that automatically tweet my newest twitter updates.
I’ve been looking for a plug-in like this for quite some time and was hoping maybe you would have some
experience with something like this. Please let me know if you run into
anything. I truly enjoy reading your blog and I look forward
to your new updates.

You actually make it appear so easy with your presentation however I find
this topic to be really something that I believe
I would by no means understand. It kind of feels too complex
and very wide for me. I’m looking ahead in your next submit, I’ll attempt to get
the cling of it!

Quality articles is the key to be a focus for the viewers
to pay a visit the web site, that’s what this web site is providing.

Please let me know if you’re looking for a article writer
for your blog. You have some really good articles and I think I would be a good asset.
If you ever want to take some of the load off, I’d really like
to write some articles for your blog in exchange for a link back to mine.
Please send me an e-mail if interested. Regards!

how to join the

My brother recommended I would possibly like this website.
He used to be totally right. This post actually made my
day. You cann’t consider just how so much time I had spent for this info!
Thank you!

Attractive portion of content. I simply stumbled upon your blog and
in accession capital to assert that I get actually enjoyed
account your weblog posts. Any way I will be subscribing
to your feeds and even I achievement you get right of entry to consistently rapidly.

After retirement Walker had a successful management career,
leading both Sheffield Wednesday and Nottingham Forest to FA Cup success.
During the winter solstice, on the darkest day
of the year, a being like no other emerged from the forgotten alleyways of Noxus.
Every time you go to your training classes, it
must be because you’re interested to learn and not just because
you have already paid for them.

cost to join the

First of all I would like to say fantastic blog!
I had a quick question which I’d like to ask if you do not mind.
I was interested to find out how you center yourself and clear your mind prior to writing.
I’ve had a hard time clearing my thoughts in getting my thoughts out there.
I do enjoy writing however it just seems like the first 10 to 15 minutes are usually wasted just trying to figure out how to begin. Any
ideas or tips? Appreciate it!

Awesome steam showers, we had a unit hooked up approximately five years ago and so it could possibly
do with modernizing, would never get a bland old typical kind of shower again

What i do not realize is in truth how you are now not really much more neatly-liked than you may be now.
You’re so intelligent. You realize thus significantly in relation to
this matter, produced me individually believe it from numerous various angles.
Its like men and women aren’t involved except it is something to accomplish with Girl gaga!
Your individual stuffs nice. At all times care for it
up!

Quality content is the crucial to be a focus for the visitors to
pay a quick visit the site, that’s what this web site is providing.