Apart from stunning the crowd by adding to new affordable Windows Phone handsets in to their roster, Cherry Mobile has another trick up its sleeves last night and it comes in the form of their first Windows tablet – the CM Alpha Play. 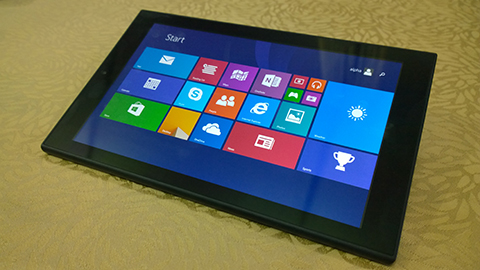 Design-wise, the Alpha Play makes do with a flat and square-ish frame with an 8-inch display on the center bordered by a relatively thick bezel. In short, CM isn’t going to take home any design award with their new tablet, but we won’t be surprised if this is just a case of substance-over-style which we’ve come to expect from most wallet-friendly devices. 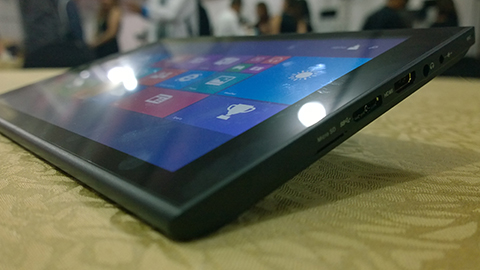 Most of the magic happens on the right side of the device (or the bottom, if the tablet is portrait orientation). Here you’ll find Micro-SD card slot for storage expansion, USB 3.0 port (Yes, 3.0 aka SuperSpeed USB), HDMI out, headphone jack and charging port.

As for the Power and Volume rocker, you’ll find those nicely situated on the Alpha Play’s right flank. These keys are neighbored by the Home button which takes the place of the capacitive Windows key that is usually at the bottom of Windows-powered tablet’s display. The side panels (when the tablet is held upright) are slightly tapered which creates a slight angle that makes it easier to hold the tablet using one hand or pick it up when it’s lying flat on a surface. The tapered side panel terminates to the tablet’s plastic back cover that has a nice matte finish.

In this area, you’ll find the tablet’s 5MP BSI rear camera that is off-kilter to the left and is sandwiched between two speaker grilles. The CM Alpha Play runs on a full version of Windows 8.1 which means that most of the software that you can run on your PC should be compatible with this tablet. The absence of the capacitive Windows button at the bottom of the screen may take some getting used to, but you’ll eventually get the hang of swipe-based gestures on the tablet’s display.

Doing the heavy-lifting for this tablet is the quad-core Intel Atom processor with 1GB of RAM and is backed by Intel HD Gen7 GPU. We don’t have a lot of first-hand encounters with the said processor so it’ll be interesting to see how it performs in real life. But based on our short time with the Alpha Play it seems to handle things quite nicely for the new tablet.

The Cherry Mobile Alpha Play will make its market debut on the latter part of the month and will retail for Php7,999.