So Cherry Mobile finally revealed that quad-core tablet which they’re been teasing us for a week now. It’s almost the same Ainol Venus but they called it the Cherry Mobile Fusion Bolt.

The specs were slightly changed to a 1.0GHz quad-core instead of 1.5GHz and the internal storage is just 8GB instead of 16GB. This separates the Fusion Bolt from the regular Ainol Venus that’s out in the market. 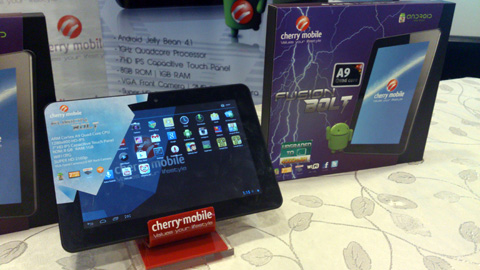 The most surprising part is that they will sell this tablet for only Php3,999. Not bad!

Release and availability is sometime in March 2013.

P.S. You can read our story about the quad-core CPU and dual-core GPU used in this tablet here.

The Fusion Bolt is a lemon tablet. It crashes every single day on a minimum use. WiFi is so weak and it lags tremendously. The camera is no longer working and it’s one of the common problems of this tablet coming from the personnel of CM kiosk. Please take note that it broke down on the first month of purchase. This tablet is trash and can’t even match Chinese cheap tablets. I understand that your site is business but you must also consider that you have moral responsibility to be honest with your reviews. I suggest that you come up with follow-ups or post review for the benefit of the consumers. After all, P4k is still P4k.