Last week we’ve given you a brief introduction to the X100s’ basic features, a quick tour of its body, as well as our initial thought about it. Now it’s time for meaty part where we’ll tackle the performance side of things to see if this this camera is indeed a worthy successor to the highly regarded X100. Towards the end of our first impression of the X100s, we’ve mentioned that although this camera shares quite a number of traits with its predecessor (from the form factor at least), it’s a totally different beast on the inside. The improvements from the previous generation may seem subtle on paper, but let us assure you that these changes goes a long way; one that will give photography enthusiasts more reasons to pick this camera from the bunch.

Before we proceed with the review, here’s a quick look at the X100s’ specs sheet. We’ve also placed it beside the X100 so you can the difference between the two cameras.

Now, I know that not all photographers will share the same passion towards cameras with fixed lens with a single focal length as it presents some limitations in composing and takes the away the ability to change lenses. However, it’s important to note that cameras such as the X100s serve a different purpose than interchangeable lens cameras and/or point and shoot cameras with variable focal length. As such, it’s meant to cater people who are either looking for a powerful back up tool for their bulky dSLR cameras or those who has a knack for wielding cameras with prime/fixed lenses. The bottom line is the X100s is not for everyone.

The X100s is equipped with the latest version of Fuji’s in-house APS-C size sensor called X-Trans CMOS II. We’re not quite sure what are the improvements that this sensor has over the previous model, but one thing’s for sure, it’s supposed to be better than the one found inside its MILC siblings (X-E1 and X-Pro1) which is considered by many as of the best sensors out there. Apart from the improved sensor, Fuji also imbued the X100 with their latest image processor dubbed as EXR Processor II. Together, these two components dramatically increased the overall performance of the X100s compared to its predecessor and addressed some of the drawbacks that X100 users brought up to the imaging firm, including the sluggishness in autofocusing. 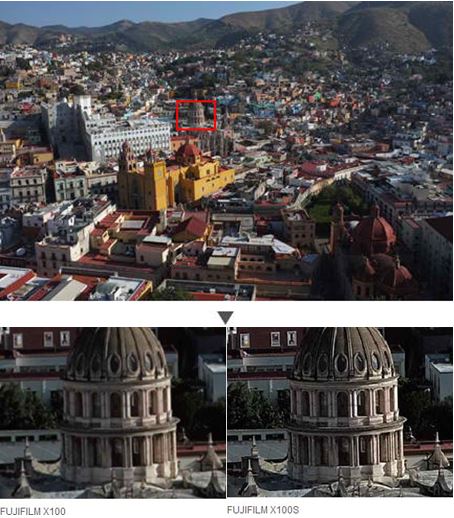 And from what we’ve experienced, we can definitely attest to the improvement that the new sensor and processor brought to the X100S. Autofocus is significantly faster and resulting images looks sharper and more refined (more in to this in the next segment).

One of the more significant changes that Fuji made on the X100s is on its viewfinder. The firm increased the viewfinder’s resolution to 2.35M-dot which makes the scene almost life-like and makes it easier to frame when using the EVF option. 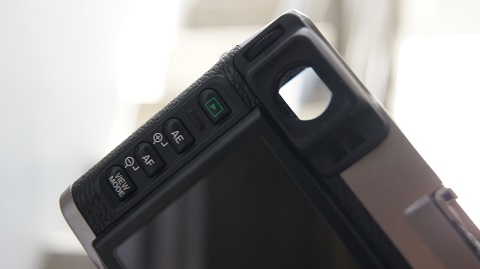 However, if you still can’t wrap your head around the whole EVF thing, you can opt to switch to the camera’s pass-through optical viewfinder which also displays relevant photography information to help you with your composition.

One thing we noticed though when we’re framing using the OVF is that it takes a bit of getting used to, especially because we sometimes tend to forget that what we’re seeing on the VF is slightly different from what the camera is seeing through its lens. But after snapping several shots, we think that framing through the X100s’ OVF will start to feel natural. Although the X100s’ screen sports a rather subpar resolution in today’s standards, we’re glad to report that the other aspects of the screen are pretty impressive. It delivers good outdoor legibility, outstanding viewing angles on all sides, and has a good color reproduction which should be enough to provide users with a decent viewing experience when reviewing images.

If there’s one aspect of the X100 that we can consider as its Achilles heel, we guess that it’ll have to be its autofocus performance. Gladly, that’s not the case for its successor, thanks to the much improved sensor and processor under the hood and the addition of an on-chip Phase Detection autofocus system. 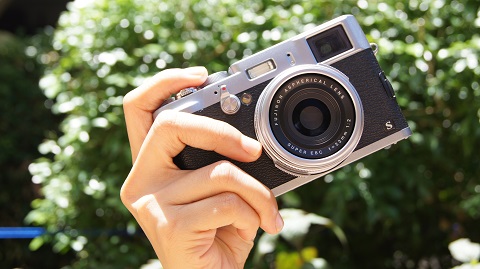 While it may not be as lightning fast as say the Olympus E-M5 or the X-E1, it’s definitely faster compared to its predecessor. The Hybrid AF system allows the camera quickly identify subjects as it automatically selects which AF detection (contrast or phase) is well-suited for the current shooting condition.

In broad daylight or well-lit situations, Fuji claims that the X100s can lock in on a subject at blazing fast 0.08 seconds. There’s no way for us to tell whether that claim is accurate, but we can certainly say that this camera’s AF speed is well above average. 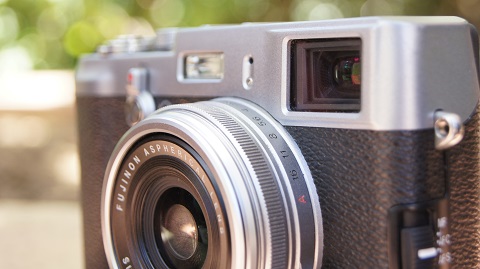 However, the camera had some issues dialing in on a subject in dim conditions. The AF assist lamp aids the snapper in zeroing in on the right focus, but even so the AF speed is still nowhere near the performance we got on a well-lit environment.

Most users tend to shy away from using their camera’s manual focus feature either because it’s more tedious and less accurate than AF. But should the need arise for you to use the X100s’ MF, you’d be glad to know that Fuji has incorporated both old and state of the art features that can help you in getting the right focus manually.

Apart from Standard, there are two additional MF assist modes that you can choose from that can help you get the right focus. The first mode is called Digital Split Image which works similarly to MF assist on old rangefinders and Focus Peaking (either Low or High) which is similar to the one found on Sony’s NEX lineup. To get a better feel of how these two MF assist modes work, here are two short videos from Fujifilm.

In totality, the X100s is actually pretty snappy, credit its new EXR II image processor. Fuji claims that it only takes half a second for the camera to spring in to action and take the first shot from off state. Furthermore, the imaging firm claims that the camera delivers a half a second interval between shots with a shutter time lag (0.01 sec) that’s almost non-existent.

Although we can’t really tell for sure if those numbers are accurate, we can tell that the camera is indeed snappy. This increase in speed is very evident when the X100s is pitted against its predecessor.

The X100s is also dead silent when capturing pictures. Its motor is actually too silent that the shutter sound is almost inaudible especially in a crowded place. 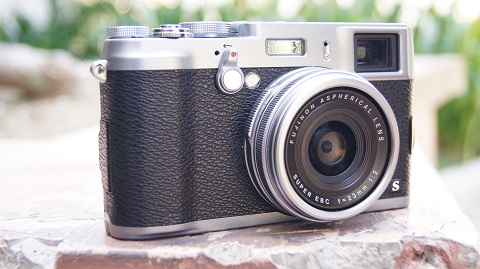 Having been equipped with almost the same sensor as the X-E1 and X-Pro1, the resulting image we got out of the X100s is one of the best, if not the best we’ve seen on an APS-C camera. It’s something that you’d have to experience personally to truly appreciate as mere words is not enough to do this camera’s outstanding imaging performance justice.
One of the things that impressed us the most is how impressive the images are even when we’re shooting in JPEG. As a matter of fact, the quality of the JPEGs we shot using this camera was so impressive that we rarely need to shoot in RAW.

Note: Pictures in the slide are downsized to fit our current image upload tool. You can see these images, and other images shot using the camera, in full resolution in this link.

The amount of detail that its sensor provides is second to none, and it did a helluva of job in keeping the noise level down even in high ISO settings. Pictures shot at ISO 6400 are remains usable for medium prints, and anything beyond it are still relatively good for small prints and social media use.

Fuji also gave the X100s a much needed boost in the video recording category. It’s capable of recording 1080p clips at 60 frames-per-second compared to its predecessor that can only do it in HD at 24fps.

Some of the camera’s amazing photography prowess also extends to its video recording capabilities. Although we think that recording videos is the last thing you’ll do with this camera, it’s good to know that it can deliver top notch clips when the situation calls for it.

This camera is outfitted with the same battery as the one found on the X100. However, the mileage we got was slightly better as we averaged around 320 to 370 on a single charge. The usage mostly involves taking tons of pictures using the optical viewfinder with a few short videos here and there.

Fuji got off to a strong start when they released the X100 to the public, not to mention startling their competition in the process. It was a solid performer overall, but it was plagued with a few drawbacks, both major and minor, that made some prospective buyers think twice in getting it.

After some time, they came up with the X100s. We’re not entirely sure what the “S” stands for, but we like to believe that “S” marks the spot! 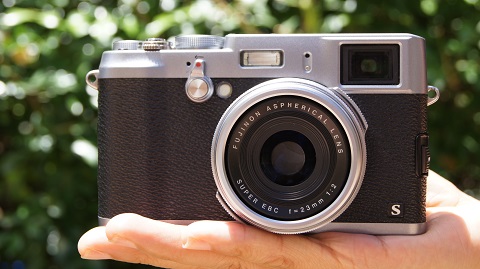 It’s got the same throwback look that made its predecessor an instant hit to photography enthusiasts, at the same time it’s equipped with a similar motor that made the X-PRO1 and its successor the X-E1 popular in MILC market. It’s the epitome of beauty and power rolled in to one mighty fine piece of photography equipment.

Of course, such marvelous device doesn’t come cheap and this camera is no exception to that rule. Owning one of these bad boys will set you back a little under sixty grand in our local currency. Now, we won’t argue with you if you think that the price is too steep, that for the same price you can get yourself a very decent dSLR camera with a kit lens or mid-range one with a slightly better optics.

In case you’re wondering if this camera is worth the sticker price, our answer is a definitive Yes. In fact, it’s no longer an issue of whether or not you should buy this, rather it’s a matter of can you afford it or not. If you’re budget allows it, we can assure you that it’s worthy investment.