[Updated: It’s back to Php32,990.] We initially reported that telcos will not likely sell the Samsung Galaxy S3 on a prepaid kit plan. Turns out Globe Telecom has already announced that once all the pre-orders have been fulfilled, they will also offer it for prepaid subscribers. 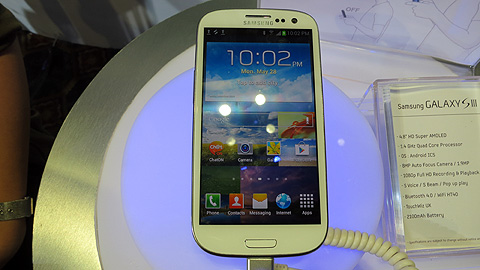 On June 9, Samsung will be releasing the Galaxy S3 in retail stores with a suggested retail price of Php32,990.

Apparently, as early as May 23, reps from the Globe Social Media team have already shared that the prepaid kit will be offered at only Php29,990.

That’s a Php3,000 discount from the local SRP. I think it’s the first time we’ve seen the prepaid kit price being much cheaper than the retail price.

Updated: Globe rep has called and wanted to correct the details we got from their Facebook Page:

Globe Telecom starts offering the Samsung Galaxy S III for prepaid subscribers at a retail price of P32,990. The prepaid phone kit package comes with a free 6-month subscription to PowerSurf 99, which has 50MB of consumable data per month.

one thing i will say is i applied fro this plan and its been approve last month thats a good news!!bad news is still they dont have availble unit to give!!!!!

the best review of the s3: http://www.youtube.com/watch?v=fVLV4R3osOc