Galawang Hokage is a form of harassment and must be stopped

There’s a fairly new type of viral videos spreading on the Internet which involves a guy grabbing the hands of unsuspecting women in public who then receive gratification from recording their reactions. Netizens call it “Galawang Hokage” or “Galawang Breezy”. While some people find it amusing, a person in their right mind would think that this is disrespectful and can be considered a form of harassment. 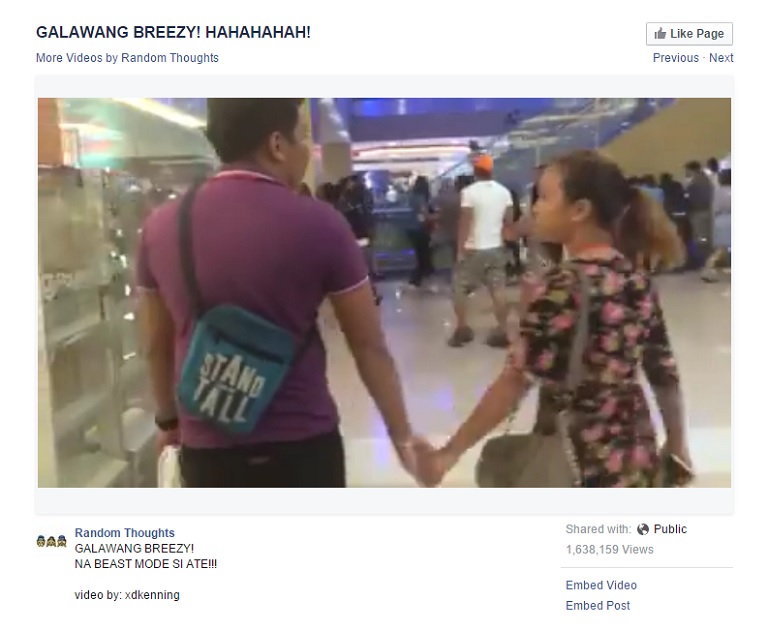 The first Galawang Breezy or Hokage video I saw was pretty much harmless and can still be considered amusing as it only involves real couples or friends – a prank, sometimes scripted, with a romantic theme. See video below.

However, things turned evil when the prank evolved into something more daring and is now directed towards unsuspecting women in public places like malls. The method is simple, the person who will initiate the act will set-up his camera for recording, scout for a potential victim (normally an unaccompanied female), follow or wait for her in a certain location (tantamount to stalking), and hold her hand without consent (tantamount to lasciviousness). Watch videos below.

Although the women in the videos showed different reactions to the situation, it is obvious that they all felt violated. According to the Republic Act No. 9262, or the “Anti-Violence Against Women and Their Children Act of 2004“, Section 3, acts of lasciviousness is considered as sexual violence while stalking is considered as psychological violence. To add to the injury, a lot of people find the videos amusing or entertaining.

UPDATE 1 (Feb. 17, 2016): As some readers have pointed out, RA 9262 covers “acts committed by any person against a woman who is his wife, former wife, or against a woman with whom the person has or had a sexual or dating relationship, or with whom he has a common child.” The above situation may fall under RA 7877 or the Anti-Sexual Harassment Act of 1995. In a report by PhilStar in July 2015, RA 7877 has been approved for amendment by the House of Representatives to expand “the scope of the law by including in the crime of sexual harassment any act that may be committed physically, verbally or visually with the use of information communication technology or any other means of technology within or outside the place of employment, training or education.”

UPDATE 2 (Feb. 17, 2016): Based on several legal comments, the only legal framework that would apply in this scenario would be Unjust Vexation under the Revised Penal Code.

We’re not lawyers so we’re not sure how the law will apply in this scenario and we haven’t heard of anyone charged because of these acts, but when women feel threatened, harassed, or abused so that someone can make a viral video, then it must be stopped and shouldn’t be patronized. Women are not tools for amusement.

https://www.facebook.com/xdkenning
the guy from the first vid

You call it harassment if they do it consecutively to the same individual, but this is like just “once”. I don’t see any harm being done. What if a girl does it instead of a boy? Ignore nalang?

This is a video meant to be a video just for laughs, whether it’s funny or not, deal with it.

Hygiene should be a concern too. I mean, who knows where those hands have been? Gross.

People, you do know that there’s a different side to these videos where it’s a girl that does those, for a lack of a better term, “galawang breezy”. So which RA would you think is applicable? Can you still call it harassment when a girl does it? Piece of advice to people like Louie that makes these kinds of articles, do proper research and get your facts straight.

i can’t wait for someone to try this on me so I can finally put my muay thai training to use.

What a bunch of losers!