Netflix to launch in SG, HK, South Korea and Taiwan 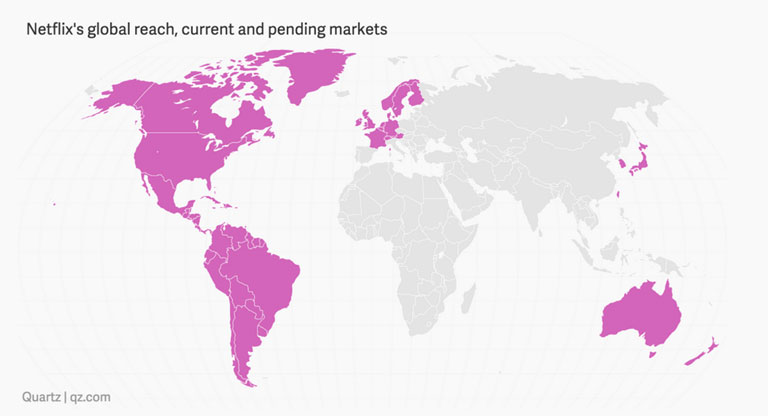 A couple of days ago, Netflix made the announcement that it will soon launch in key South East Asia countries which includes Singapore and Hong Kong as well as Taiwan and South Korea.

Netflix targets the roll out of their service in these 4 countries early 2016. These 4 countries also happen to be ranked on top of the list of fastest internet speeds so streaming hi-def video over the internet would not be a problem.

With this development, we might see the Philippines to be the next target in the near future.

[showhide class=”pressrelease”]
LOS GATOS, Calif., Sept. 8, 2015 /PRNewswire/ — Netflix, Inc. announced today it will expand into South Korea, Singapore, Hong Kong and Taiwan in early 2016 as it moves to complete its global rollout by the end of next year.

Once launched, Internet users will be able to subscribe to Netflix and instantly watch a curated selection of popular TV shows and movies in high-definition or even Ultra HD 4K on nearly any Internet-connected screen. Netflix first became available in Asia earlier this month with the start of service in Japan.

“The combination of increasing Internet speeds and ubiquity of connected devices provides consumers with the anytime, anywhere ability to enjoy their favorite TV shows and movies on the Netflix service,” said Reed Hastings, chief executive officer of Netflix. “These four markets well represent those trends.”

With a constantly improving user experience, advanced personalization technology and a curated selection of TV shows and films, Netflix members are able to create their own viewing experience and can easily discover new favorites, while reconnecting with popular characters and stories.

See also  The Science and Magic of every Netflix Originals show

Netflix members connected to the Internet can watch whenever, wherever they like, and on any device they choose. Members can start watching on one device, pause, and then pick up where they left off on another, at home or on the go.

Netflix will be available at launch on smart TVs, tablets and smartphones, computers and a range of Internet-capable game consoles and set-top boxes. Additional details on pricing, programming and supported devices will be available at a later date. Consumers can sign up to be alerted when Netflix is available on www.netflix.com.

Those four countries are collectively called “Four Asian Tigers”, I may add.

yes philippines is next..
maybe in the year 2050

iFlix and Hooq are already in the Philippines. These are regional streaming services so Netflix will not have a problem doing the same.