PaperFold is a folding smartphone, tablet, laptop in one

By Kevin Bruce FranciscoPublished • May 5, 2014

Unveiled at a human-computer interaction conference in Toronto, PaperFold is a three-piece display that could function as three different devices depending on how you fold and connect them. It could function as a smartphone, a tablet, and a notebook all combined in one prototype device. Could this be the future of communications? 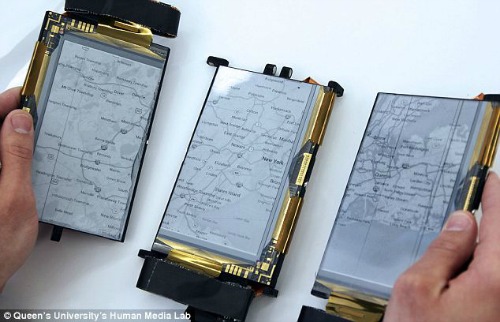 The idea behind PaperFold is that users can combine or dismantle the three e-ink panels to suit the user’s needs. The gadget not only recognizes different functions from its connections, but also with the way they are folded. For example, laid straight-out flat on a table and it could be used for Google Maps across the three displays. Folding it like a laptop makes it indeed function as a laptop with a keyboard and a screen, while folding it like a 3D building while using the map turns the device into a 3D-printable architectural model.

Watch the short video below and see more of the different ways it can be used:

The element that caught our attention (other than the fact that it is, after all, a folding smartphone!) is its portability. After using it, one can just fold them together and simply slide it in one of the pockets of a bag and it’s all good to go. With a little help from developers, more features could be built into the PaperFold and it could be used in more ways than what was shown here.

As of now, researchers of this project are still keeping silent if PaperFold will be sold commercially. Although not all people might consider this their cup of tea, there will surely be a group of geeks (like us) who will get all excited once they perfected this gadget.