Huawei Y7a vs Realme 6i vs Samsung Galaxy A21s: Which Should You Get?

Huawei Y7a vs Realme 6i vs Samsung Galaxy A21s: Which Should You Get?

Many smartphone brands are coming up with bang-for-the-buck smartphones. We finally get to the point where we can now own midrange smartphones priced at an affordable price without compromising quality. One good example of this is Huawei’s recently released Y7a.

It comes with good specs, including a Full HD+ display, a decent processor, a 48MP quad-camera setup, and not to mention, it’s got amazing battery life. So how does it compare to what realme and Samsung have to offer? Let’s see. 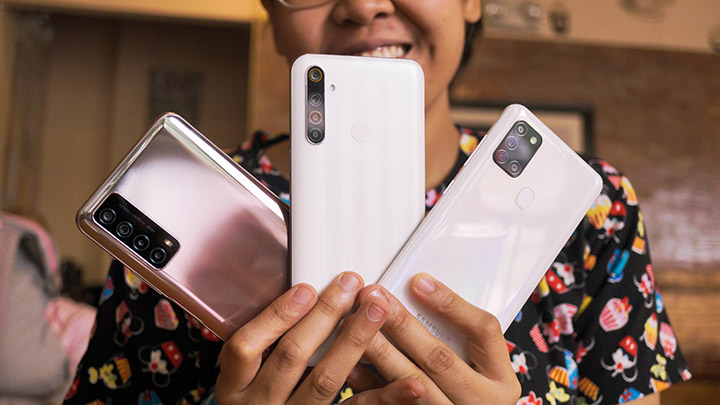 When it comes to design and build, all three devices are made up of plastic. However, the Y7a stood up the most for its really attractive and pretty design. It sports a subtle pink gradient with its faint pink tinge in the middle. The Galaxy A21s come close behind for its glasstic back that exudes a rainbow effect, which looks good. The realme 6i, on the other hand, sports this somewhat holographic vertical lines along the that are nice to look at and may remind you of a Rimowa suitcase. 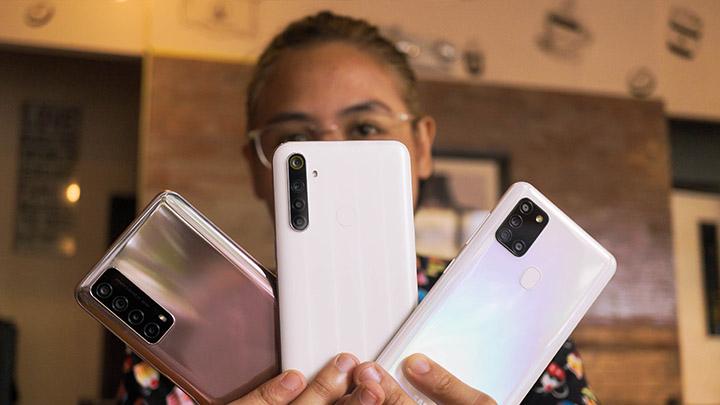 When it comes to comfortability, the Galaxy A21s takes the cake for having a slimmer profile among the three at 8.9mm, but that isn’t to say that the other two don’t feel comfortable to hold. However, when it comes to durability, we pick the Y7a since it feels more solid and premium than the other two phones.

For this section, we’re giving it to the Y7a for its sturdy build and premium design. The Galaxy A21s comes next, with the realme 6i not too far behind.

Without a doubt, the display category goes to the Y7a. Among the three, it’s the only one that comes at a Full HD+ (2400 x 1080px) resolution and having a large screen size of 6.67-inch IPS display. The display looks great. The colors are vibrant and punchy. It’s got a widescreen real estate, so users will enjoy watching content on this device. 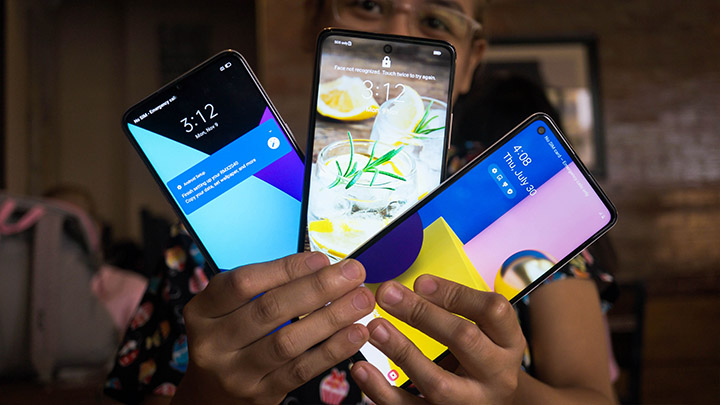 Both the realme 6i and the Galaxy A21s sport a 6.5-inch HD+ (720 x 1600) display; however, the former has a better color reproduction than the latter since it uses an IPS panel while the last use TFT.

For cameras, the three devices sport a similar quad-camera setup consisting of a 48MP main, 8MP ultra-wide, 2MP depth, and 2MP macro. While for selfies, the Y7a comes with an 8MP, the realme 6i at 16MP, and the Galaxy A21s at 13MP. 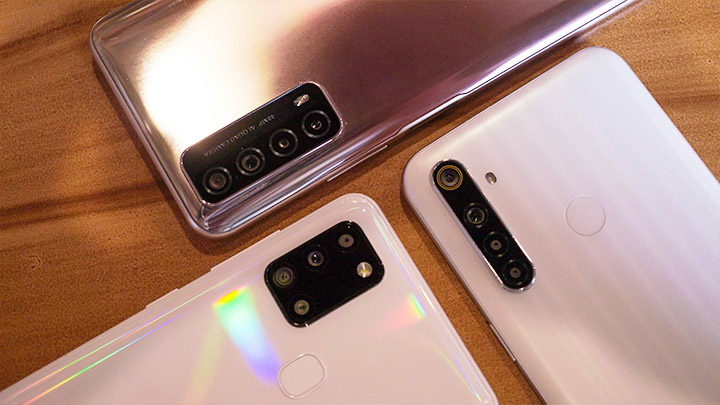 For comparison, check the sample shots below.

If you’re going to compare the shots between the Y7a and the 6i, it’s apparent that the Y7a produces better photos. It’s less aggressive than the 6i’s saturation, and the shots look clearer, and there’s adequate detail.

For selfies, the same can be said. The Y7a produced vibrant colors compared to the Galaxy A21s, which looks somewhat pale. We also noticed that the 6i tend to whiten the skin even though the beauty mode is turned off.

In this category, we’re giving it to the Y7a.

As you can see from these numbers, the 6i outperformed the Y7a and the Galaxy A21s by a number. It also performs better when it comes to mobile gaming. You will be able to run resource-intensive apps with ease. The GPU performance is moderate, but you can play pretty much any graphics-heavy game with good framerates.

The Y7a is not too far behind, and it can play graphics-intensive games in the lowest graphic settings. However, for PUBG Mobile, we somehow managed to play at a high frame rate with the graphics set to balanced, though there are still occasional lags here and there. We recommend you set the frame rate to medium and the graphics to balanced for a better experience.

Unfortunately, the Galaxy A21s seems to struggle quite a bit in graphics-heavy games, though navigation is pretty smooth.

We can say that, at this part, the 6i takes the cake for having a better gaming performance, with the Y7a coming in next and the Galaxy A21s taking the last spot. However, when it comes to casual daily use, you won’t notice any difference between the three.

Like the processor, the RAM is a crucial component to navigate your smartphone with ease. The Y7a and the 6i come with the same 4GB RAM, while the Galaxy A21s comes with 6GB RAM.

So in this category, it’s a tie between the Y7a and the 6i.

All three devices run on the latest Android 10 skinned with their respective skins. As you all know, the Y7a doesn’t use Google Mobile Services (GMS) but uses Huawei Mobile Services (HMS), which somehow put the 6i and the Galaxy A21s to an advantage. However, you don’t have to worry as the Huawei AppGallery, and the Petal Search Widget offer all the apps you need. 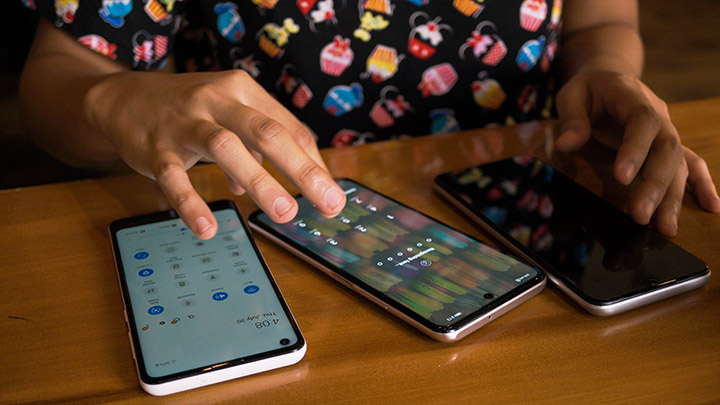 Huawei uses the AppGallery instead of the Google Play Store. Popular apps are already available in the marketplace, while 90% of top apps are already working on Huawei devices like Microsoft Office, MX Player, VLC, iFlix, iWant, Viu, and Wattpad. Users can choose to sideload their apps or use third-party app stores like APKPure, APKMonk, or Aptoide. To make it more convenient for users to search for apps, there’s the Huawei Petal Search Widget, a search engine for apps. Just type the app that you want, and it will search the web for the APK for you to install. EMUI 10.1 will also check for the application’s integrity to ensure that the app is safe for installation. If problems occur, users can get support by calling the Huawei hotline.

If you need to use Google services like Gmail, Google Photos, and YouTube, they’re still accessible via the built-in browser.

There’s also the Huawei Email app that lets you access your Gmail, Yahoo Mail, and even Outlook Mail accounts. The AppGallery also gifts and rewards you can claim like in-app credits, discount vouchers, VIP access to services, even credits to GCash or Paymaya.

In this category, it’s a tie between the three.

For battery, all three devices are equipped with a massive 5,000mAh battery. The Y7a supports 22.5W Huawei SuperCharge, while the 6i supports 18W fast charging, and the Galaxy A21s only comes with 15W fast charging.

In our standard video loop test, where we put the phones in airplane mode, play a 1080p video at 50% brightness and 50% volume with headphones on, we got these results:

While these three devices offer a large battery capacity, the Y7a stood up the most for having a fantastic battery life that can last a day or two.

Here is the price for each device:

As you can see, the Y7a comes with an enticing price tag of PHP 8,999 and is a thousand cheaper than the 6i and the Galaxy A21s. Not to mention, you’re already getting 4GB RAM and 128GB internal storage out of the box compared to the realme 6i. 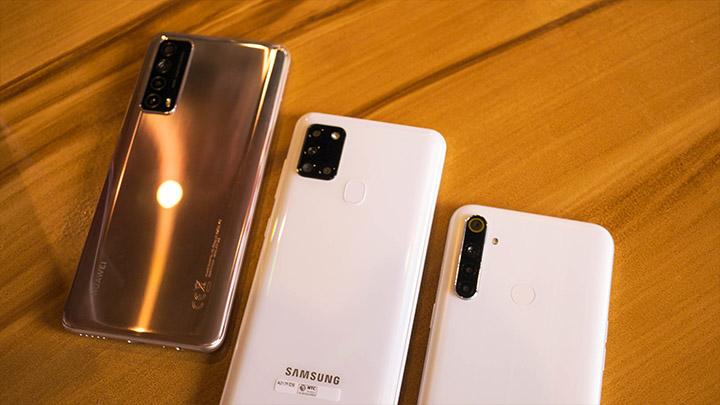 Based on the tally, the Huawei Y7a scored 7 points out of 9 categories, while the realme 6i got 3, and the Samsung Galaxy A21s at 2 points. 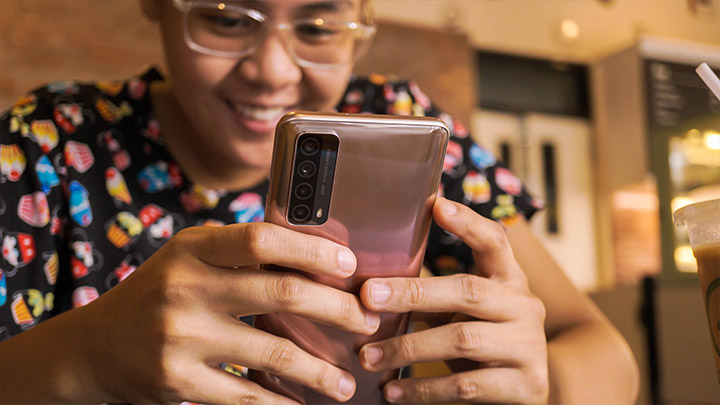 While the realme 6i and the Samsung Galaxy A21s may have performed a bit better at some aspects like the camera and gaming experience, you’re getting a Full HD+ display, an elegant design, and an impressive battery life with the Huawei Y7a. So if you’re on the lookout for the best smartphone you can get under PHP 10K without compromising quality, then the Huawei Y7a is the best choice.