Both POCO and OnePlus have recently brought their latest 5G smartphones to the Philippines— the POCO X3 GT and the OnePlus Nord 2 5G. Both smartphones are equipped with similar specs, including their powerful MediaTek Dimensity chipsets and triple rear cameras. Hence, if you want to know which is better to get, read through as we pin both phones against each other in a specs comparison. 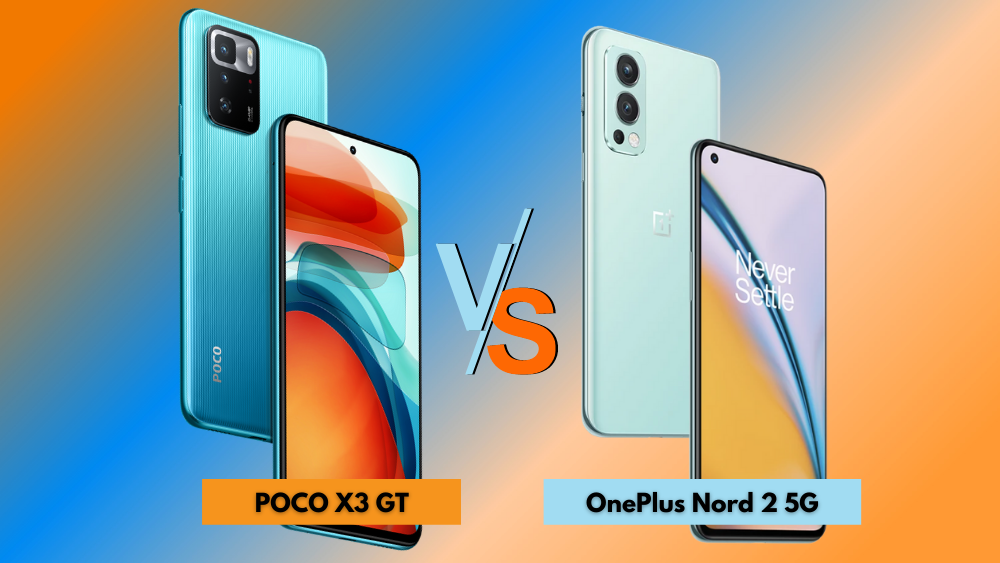 Both devices pack large 6-inch screens, with the POCO X3 GT being slightly larger at 6.6-inch. However, the 0.17-inch difference isn’t much of a big deal. Both also come with an FHD+ display with 2400 x 1080 resolution.

The former has an IPS LCD screen, while the latter has an AMOLED screen. LCD produces more natural colors and brighter whites. AMOLED, on the other hand, has more vibrant colors, especially when it comes to reds, greens, and blues, and has deeper blacks compared to LCD.

On the flip side, the POCO X3 GT sport a higher refresh rate of 120Hz and a touch sampling rate of 240Hz, providing an advantage for gaming.

Powering both smartphones are MediaTek’s latest 5G-ready processors; the POCO X3 GT is equipped with a MediaTek Dimensity 1100 5G SoC, while the OnePlus Nord GT comes with a more advanced Dimensity 1200-AI.

According to MediaTek, the 6nm Dimensity 1200 and 1100 chipsets power highly capable 5G smartphones with top of the line camera features, graphics, connectivity enhancements, and more.

However, note that OnePlus partnered with MediaTek to bring the customized MediaTek Dimensity 1200-AI chipset to the Nord 2 5G. So, it claims to sport developed Dimensity 1200 with new AI capabilities, including AI-assisted photography, display enhancements to user experience, better response times in gaming, and the like.

Checking out their Kimovil’s AnTuTu scores, the POCO X3 GT (677,171) beats the OnePlus Nord 2 5G (624,572). Although keep in mind that this is just synthetic performance. We can only verify real-life performance and thermals once we have both units for review.

The POCO X3 GT comes with 8GB of RAM. The OnePlus Nord 2 5G, on the other hand, has options of either 8GB or a bigger 12GB of RAM. Both devices support LPDDR4X RAM that brings lower voltage, allows more power-efficient memory, and gives longer battery life to smartphones.

When it comes to storage, both devices also give up to 256GB of UFS 3.1 storage. UFS 3.1 offers two times the data rate with faster read and write speeds than the previous version.

However, for selfies, the OnePlus Nord 2 5G is expected to deliver higher quality photos with its 32MP front camera than the 16MP module of the POCO X3 GT. Take note, though, that these numbers don’t always equate to quality. We will provide proof of which camera is better once we test both units for comparison.

For security, the POCO X3 GT has a side-mounted fingerprint scanner, while the OnePlus Nord 2 5G supports in-display.

In terms of audio, both smartphones are equipped with dual stereo speakers. The POCO X3 GT’s audio is powered by Dolby Atmos, while the OnePlus Nord 2 5G is tuned by JBL. The former, however, supports Hi-Res Audio and Hi-Res Wireless Audio, so it is expected to deliver clearer sound.

The POCO X3 GT comes with a 5,000mAh battery with 67W fast charging, while the OnePlus Nord 2 5G has 4,500mAh with 65W fast charging. Thus, both smartphones can recharge fast with their high charging rate. Although 2W isn’t much of a leap, the extra 500mAh is still an edge for the POCO X3 GT.

Despite being much cheaper, the POCO X3 GT excels in many ways; it got a better display, main shooter camera, and battery. These specs are worthy, especially if you are looking for an affordable 5G smartphone, which could also be reliable for gaming.

However, we must also consider that the OnePlus Nord 2 5G sports a more advanced processor, a bigger RAM option, and a higher resolution front camera. We don’t think these specs should cost you an additional PHP 6-8K, though, so the decision would likely depend on whether you are willing to spend more.