When we’re talking about premium laptops, especially premium creator laptops, most of us, pros and non-pros, will instantly think of the Macbook Pro’s at the top end of the spectrum. Most of the time these devices offer little compromise and offer a lot of productivity for the user. Windows devices tend to always come with some kind of caveat that ultimately ends up inferior to its fruity counterpart. While that’s still true for the most part, Windows laptops are catching up. 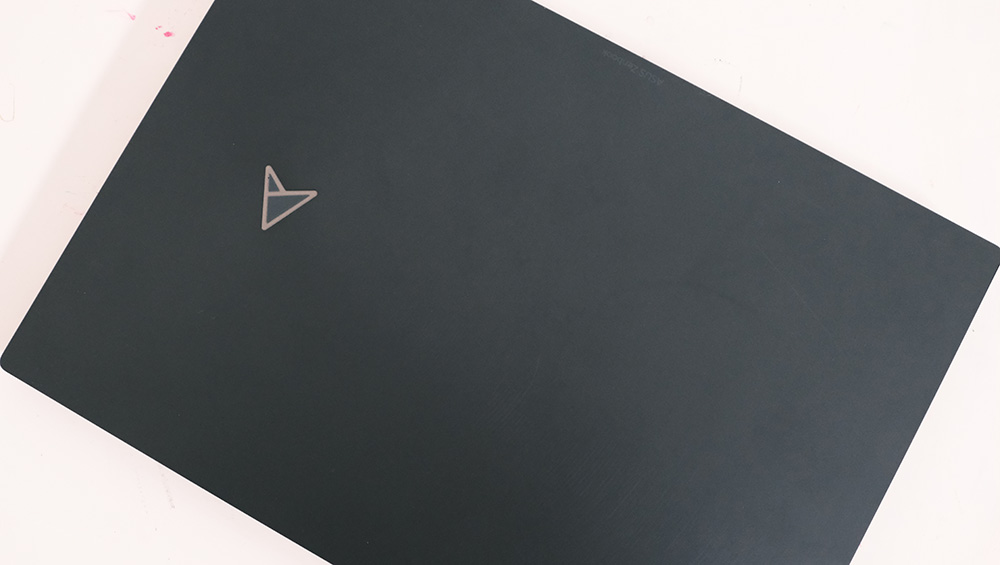 Enter the ASUS Zenbook Pro 16X OLED, a laptop with some compromises but it certainly tries it’s best to prove that ASUS is not kidding when it comes to taking laptops a step further. And with a price tag that comes attached to this laptop, the company tries it’s best to make sure that what you’re paying for is well worth it. So let’s check it out!

First off, the Zenbook Pro 16X OLED is extremely well built. It just feels solid to hold in the hand, no creaks anywhere and that machined aluminum chassis gives confidence that it will last for a long time. No flex on the keyboard, lid, or anywhere else, it feels like one solid piece of machinery. At first I thought it’d be a fingerprint magnet but to my surprise, it doesn’t pick-up as much as I thought it would. A few smudges here and there but nothing crazy like other laptop designs out there. 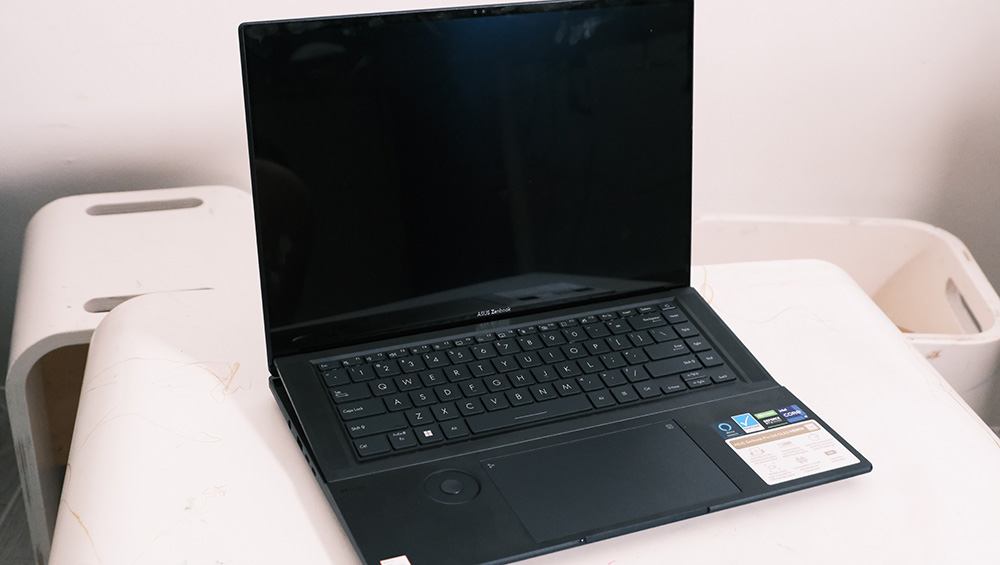 The design is super simple with just an illuminated ASUS logo that’s RGB customizable on the lid and a Zenbook branding on the chin of the screen. Everything else is clean and well put together. Speaking of RGB there’s also two lightbars hidden behind the keyboard that adds a bit of that gaming flair to the laptop as well. 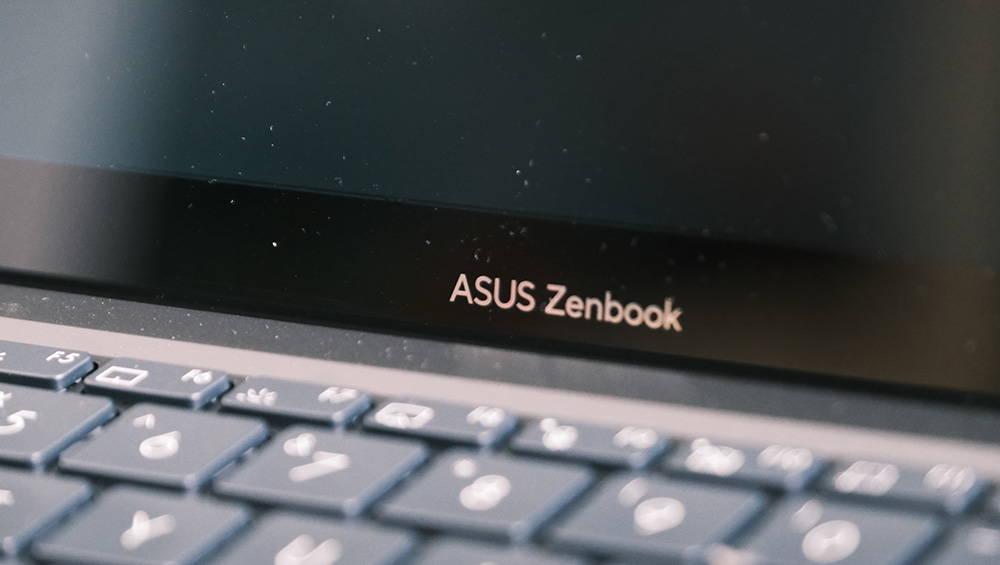 This is a big boy laptop by the way, those looking for an ultra-sleek tiny ultrabook should be wary. It weighs in at around 2.4kg, and is 16.9mm at its thinnest point. For what it’s worth though, I never found the laptop unwieldy, it felt very balanced despite the weight, and the material really feels like it will last for a long time. 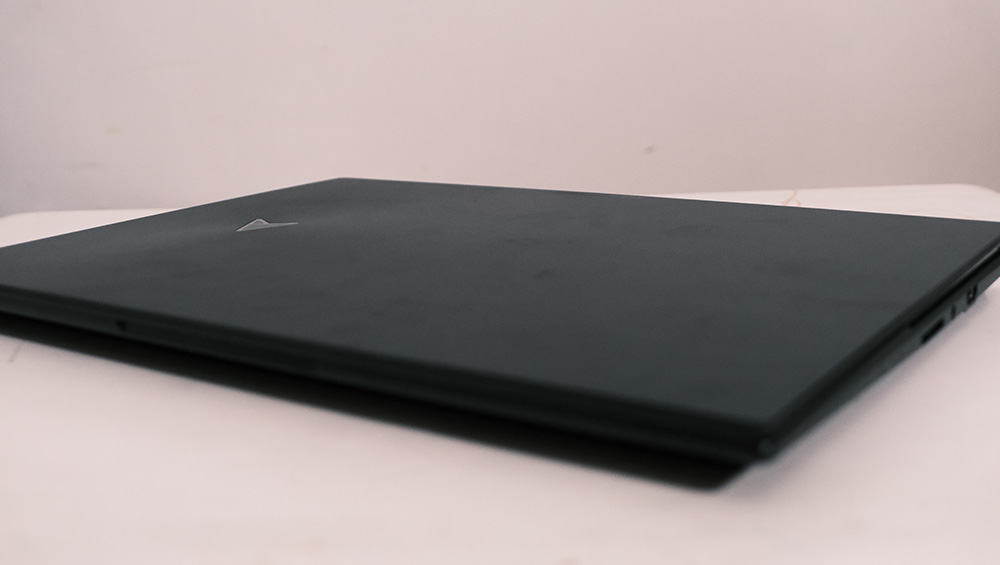 The highlight of the design of the Zenbook Pro 16X is definitely the hinge mechanism that raises the entire keyboard when you open the lid of the laptop. It gives you a better typing angle that is a bit weird at first, but once you settle down, it definitely is a better typing experience. The hinge is very sturdy and well made so it gives you a lot of confidence in it. You can open the lid with a single hand and there’s no feeling of wobbliness when doing so. Maybe the only issue you could foresee here is if dust would get into the mechanism under the keyboard, but that’s something only time can tell. 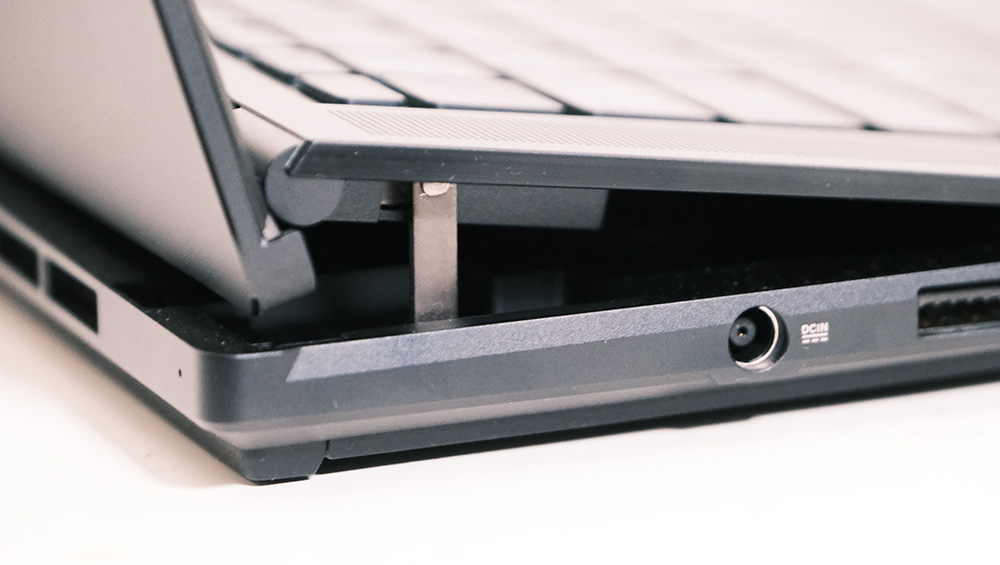 The keyboard itself is great. It’s not mushy like a lot of laptops out there and there’s a certain clicky-ness to the keyboard that’s not quite mech but not soft either. I’m a sucker for laptops without numpads as I feel that numpad’s cramp up a laptop keyboard. The keyboard also comes with ASUS’ signature numpad that can be activated by tapping the small icon at the top-right edge of the touchpad. The signature ASUS Dial is here as well, and this is where the laptop will definitely appeal to creatives and people looking to do more with their device. It is a touch-sensitive ring that can provide a lot of utilities to the user. In default, it can control the brightness and volume of the device, but you can customize it to adjust and control software like Adobe’s Creative Suite, which opens up a whole new way using the laptop for productivity. 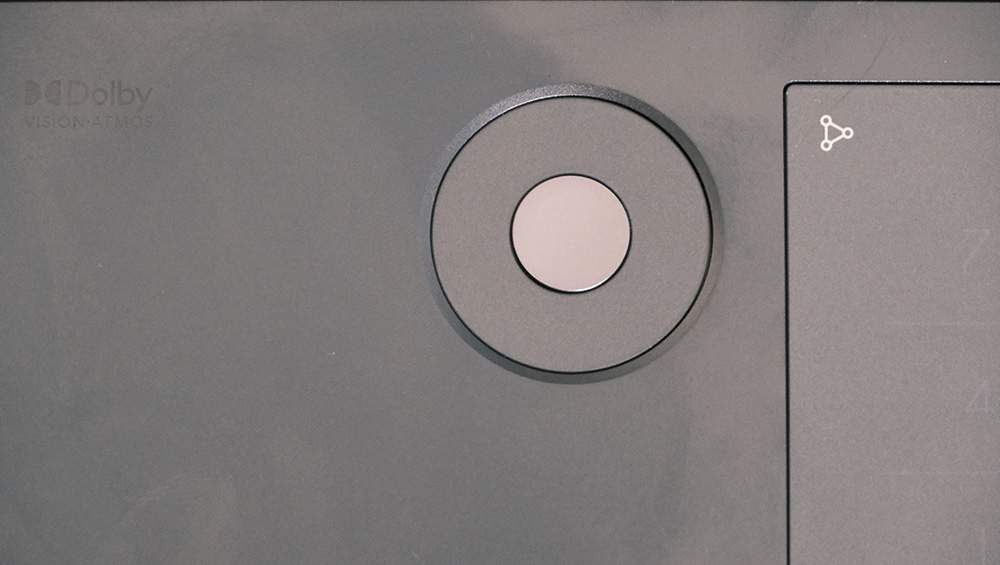 On the right side of the device you got a full sized SD card reader, microphone jack, and an HDMI 2.1 output. 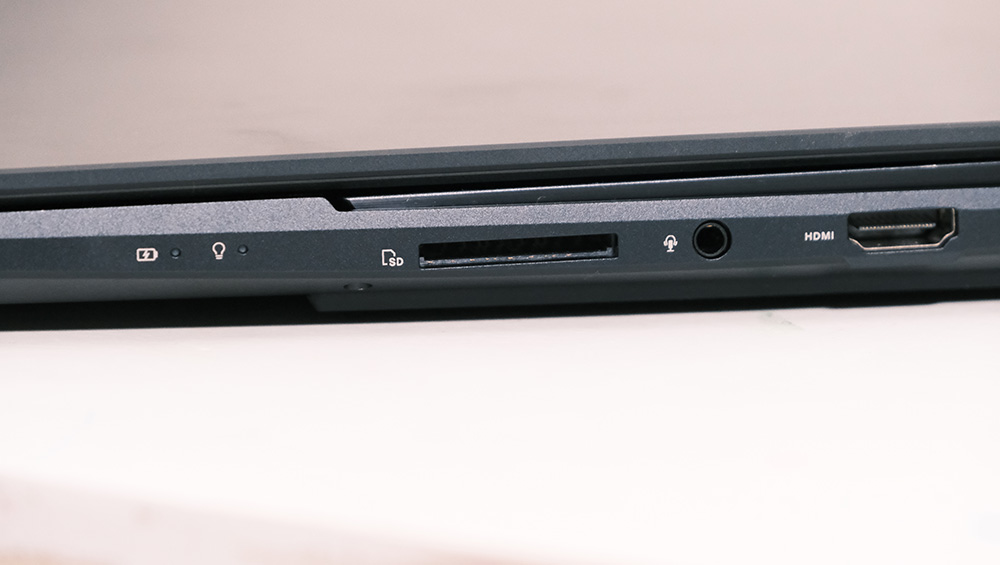 The left side has two USB Type-C ports that support Thunderbolt 4, and a USB Type-A slot plus the charging port. 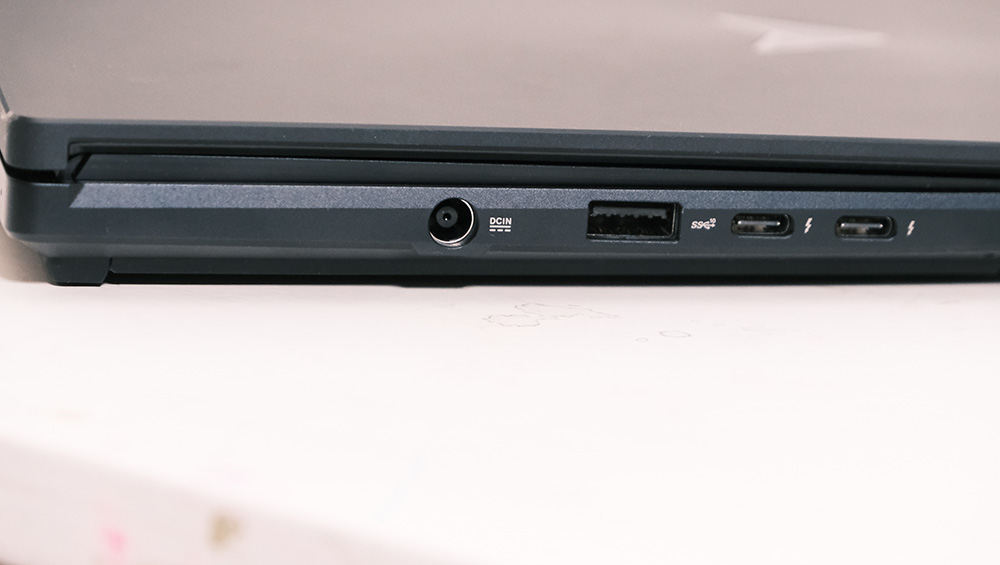 The screen of the ASUS Zenbook Pro 16X OLED is just a beauty to look at. I could just say it’s an OLED display and call it a day but that is a disservice to the gorgeous blacks that this display produces. It is a 16-inch OLED display with a 3840 x 2400p resolution and a 60Hz refresh rate. The screen has that beautiful aspect ratio of 16:10 which is a godsend for productivity. It covers 99% of the sRGB and 98.6% of DCI-P3 color space. It also covers 96.9% of AdobeRGB, needless to say, for productivity and color accurate workflows, the Zenbook Pro 16X will be more than enough. ASUS claims a peak brightness of 550 nits, but that is only achievable during certain scenarios with HDR on. Our tests put this at around 350 nits of peak brightness in SDR, and around 400 nits in HDR on average. 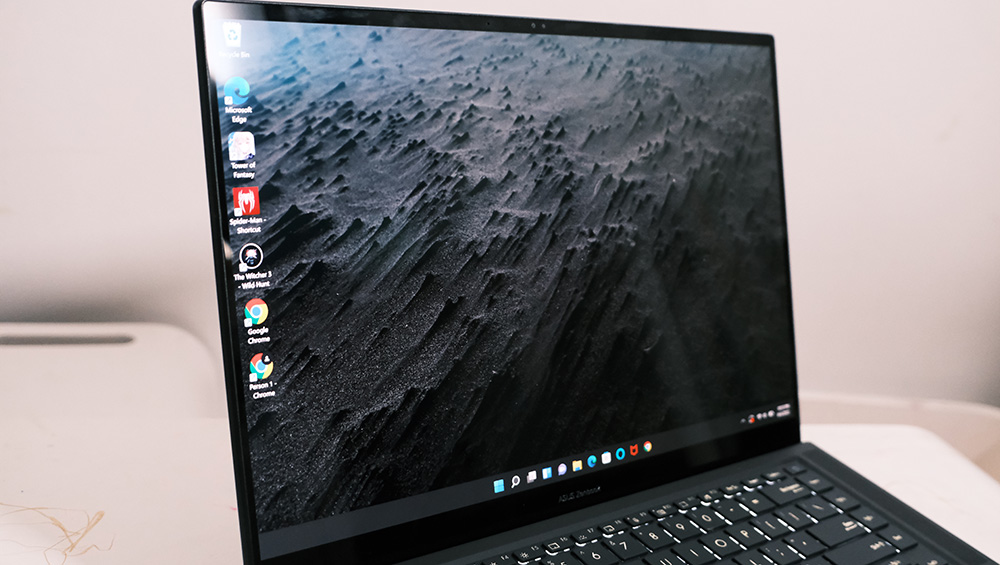 It is a very glossy display that actually makes colors pop even more, but is prone to finger smudges and fingerprints so you have to make sure your screen is clean at all times. Watching videos and playing games on this device is an experience. Check out Amazon’s Lord of the Rings: Rings of Power on this device, playing it at 4K was a great viewing experience. The only thing someone could gripe about would be the 60Hz refresh rate, but when you get a beautiful OLED display like this, you kinda forget the fact that you’re only watching and running things at 60Hz. 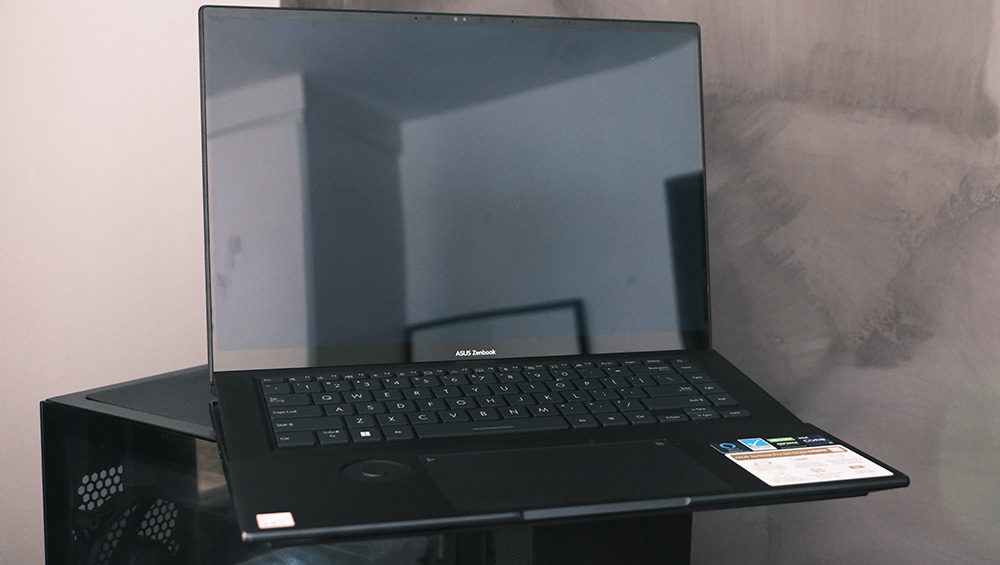 In the audio department, the Zenbook Pro 16X OLED has two decently sized speakers at both ends of the keyboard that produce clear and loud audio. It’s one of the better pens you can find on a laptop, I’d say second to a Macbook Pro. There’s enough oomph in the bass that you wouldn’t be disappointed and vocal clarity was right there as well. It does get generally loud but not too loud that it becomes obnoxious. You can fill a room with the device with pleasing sound quality that surely won’t disappoint anyone. 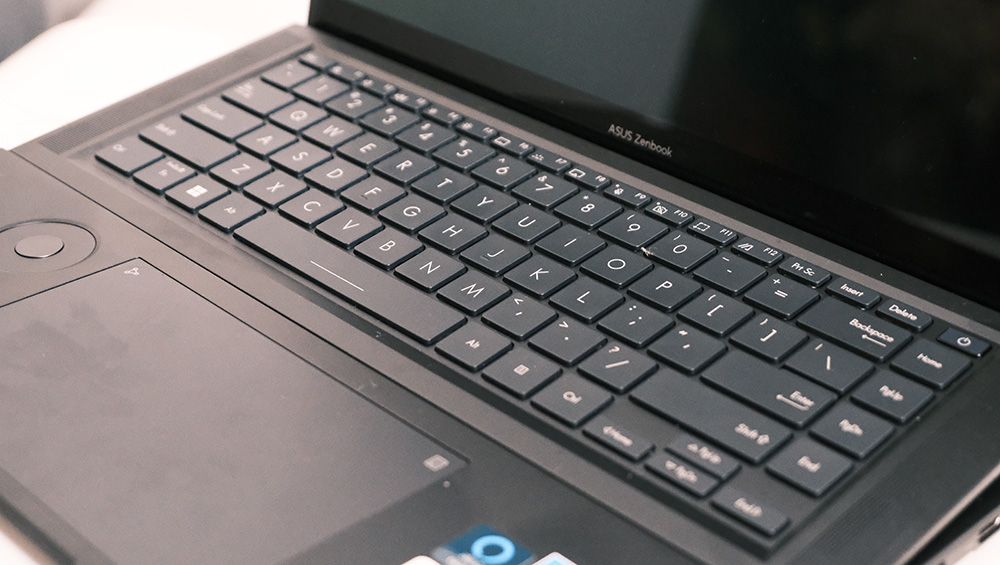 The ASUS Zenbook Pro 16X OLED that we reviewed comes with an Intel Core i9 12900H processor, 32GB of DDR5 dual channel memory, 2TB of SSD storage and an NVIDIA RTX 3060 GPU. 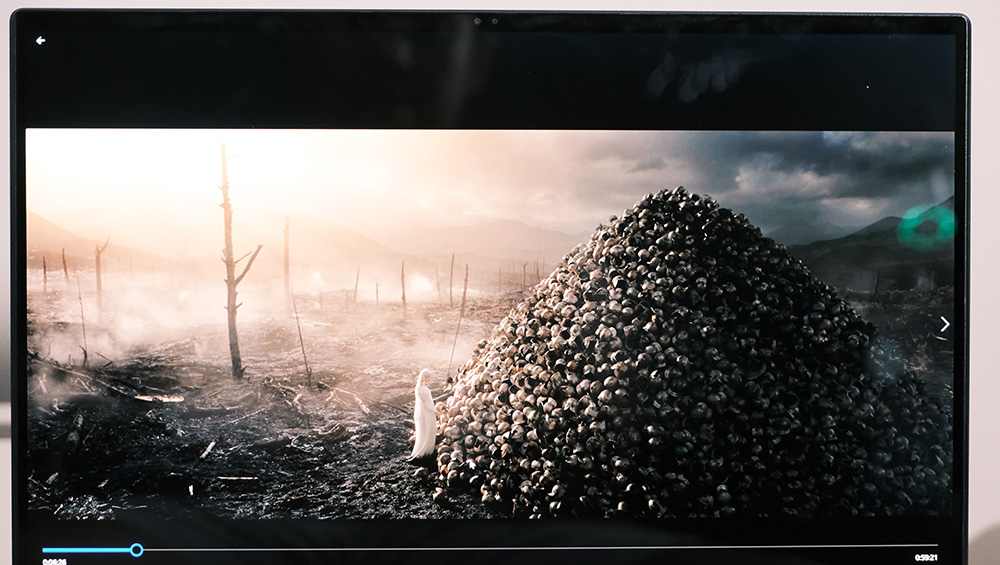 The Core i9 CPU inside this device is a 14 Core, 12 Thread workhorse which doesn’t disappoint. Even the mid tier 3060 that draws 95W of power is more than enough for productivity. Gaming meanwhile might be subjective but we’ll get into that later. Here are some results of synthetic benchmarks we ran. So as you can see, this laptop can play games, but depending on what kind of experience you’re looking for then you might be disappointed. If you’re looking for something that plays high refresh rate AAA titles then this isn’t your cup of tea, but with the games we tested it on, it played just fine. Single player titles like these generally don’t need you to go above 60fps and the immersion that the OLED screen gives you can offset the lack of high refresh rates. Inside the Zenbook Pro 16X OLED is a 96Wh battery which is one of the bigger ones you can find on a laptop. At the same time don’t expect crazy good battery life as it has to run an Intel i9 chip and a 4K display. At full charge, the laptop only lasted under 5 hours. Around 4 hours and 52 minutes with regular use. In gaming I was only able to use this laptop for around an hour and 12 minutes, so make sure you plug this thing in! This might be a letdown but the charger can juice up the device pretty fast, and it’s not a big charger that’s pretty easy to lug around.

The ASUS Zenbook Pro 16X OLED is a premium laptop with a premium build quality plus a premium price tag. For creatives out there though, or those looking for a laptop that really pushes productivity? Then this should be one you should consider. It comes with a powerhouse of a processor that will surely last you years, and a GPU that might be mid-tier when it comes to gaming but will be more than enough for power hungry creators out there. That beautiful screen really makes this laptop pop and with a build quality that is a step up versus most other Windows laptops out there, it’s hard to find a lot of faults with the ASUS Zenbook Pro 16X OLED. I think it is a device that knows who its market is and is unapologetic in targeting that specific consumer base. So if you’re interested in the device, it is priced at PHP 239,995 and comes with a free 3 month subscription to Adobe Creative Cloud.