During the launch of the three new Huawei Honor smartphones last week, we got a chance to play around with the new Honor 6 Plus and be acquainted with some of its features. Head past the break to see our first impression of the flag bearer of the Honor lineup. 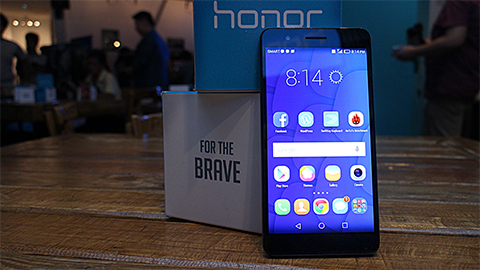 As far as design goes, the Honor 6 Plus carries the same vibe of its predecessor, the Huawei Honor 6 (see our quick review here). Apart from the larger display, the two handsets look identical to each other.

Speaking of its display, the Honor 6 Plus’ 5.5-inch display occupies most of the real estate at the front, bordered by relatively thin bezels on each side. At the top of the screen are the front-mounted 8-megapixel shooter neighbored by the handset’s earpiece.

The bottom portion of the screen is a barren space as the physical buttons for navigation were replaced by a trio of on-screen buttons. A silver trim runs around the edge of the almost all-screen front panel. It is here that most of the external components are placed which include the power button, volume rocker and two SIM card slots on the right, audio jack and IR sensor at the top, and micro-USB port at the bottom.

The only other two components that are not on this side are the dual LED flash unit and the dual-camera setup, both of which are placed at the top-left corner of the Honor 6 Plus’ back panel. The loudspeaker is found at the bottom left near the obligatory markings on the handset.

It’s still debatable if Huawei really used glass for the Honor 6 Plus’ back panel, but we noticed that it offers little to no protection against scratches. The Honor 6 Plus feels very good in the hands which is, in large part, attributed to the good screen-to-body ratio, reassuring heft and the premium materials used for its body.

The thoughtful placement of the physical also gets a nod from us as we rarely found ourselves adjusting our hands in order to reach these keys.

Speaking of buttons, all of the three physical keys of Honor 6 Plus have a good tactile feedback and are raised just slightly above the handset’s right flank so as to not break the aesthetic of the smartphone, but at the same time provide users with a good sense of where it is without even looking.

Instead of giving the new Honor 6 Plus a major design makeover, Huawei decided to maintain the iPhone 4-esque theme of the Honor 6 and employed that on its bigger sibling. That decision is usually frowned upon by some consumers, but considering that design was one of the strong suit of the Honor 6, we’re ok with Huawei using the same design scheme on the Honor 6 Plus.

It’s good to know that the newly-launched Huawei Honor 6 Plus has a classy design to go along with its impressive internal configuration. But will that be enough to sway to consumer to go this handset instead of the likes of the Asus Zenfone 2 (ZE551ML) or the Alcatel Flash Plus?