Phablets are pretty much old news considering that most smartphones nowadays feature 6-inch screens. But what if you’re someone who likes to watch videos on Netflix or YouTube, game a lot, in need of ample storage and battery, and have a budget of PHP 17K? Well, Huawei has designed a phone specifically for those needs. Check out our review of the Huawei Y Max. 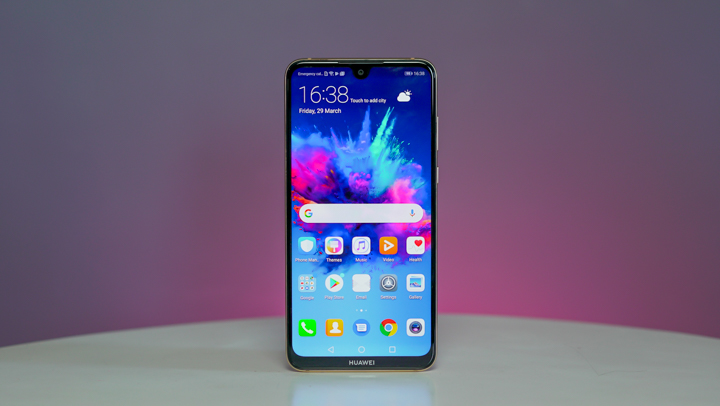 The Y Max is not an ordinary phablet thanks to the faux leather back panel similar to what we saw on the LG G4 four years ago. It has this premium and professional look, given that we’re all used to seeing glossy or matte back covers. There are two colors, namely Midnight Black and Amber Brown, but we got the latter which looks more appealing. The sides of the device are made up of aluminum alloy which looks pleasing and blends well with the device’s color. 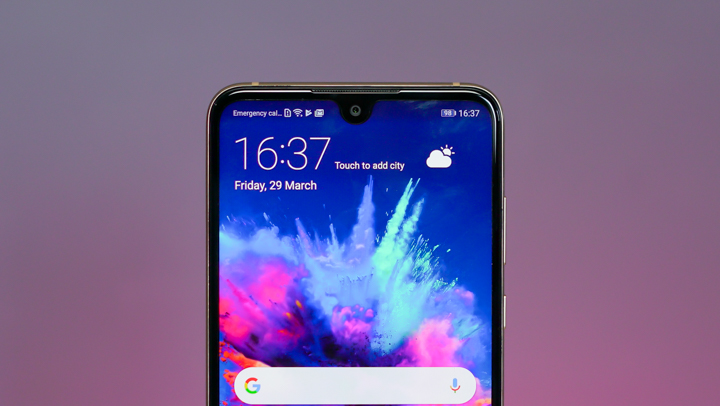 Starting at the front, you’ll see a massive 7.12-inch screen with an FHD+ resolution and a dewdrop notch design that houses the 8MP camera. On the left, we see the lone tray that houses the triple card slots which is good news to who need to use a microSD card while keeping the dual-SIM functionality. Not that you need it, given that the Y Max has a 128GB of storage which is quite large. You can find the usual volume rocker and power button pairing on the right side. The buttons are clicky and tactile which is good. However, they’re a bit high, so I have to readjust my hands most of the time so that I can press them comfortably. At the bottom, you’ll see the 3.5mm audio port, micro USB port, main microphone, and loudspeaker. It’s quite a bummer that the device doesn’t use a USB Type-C given that it’s already 2019. 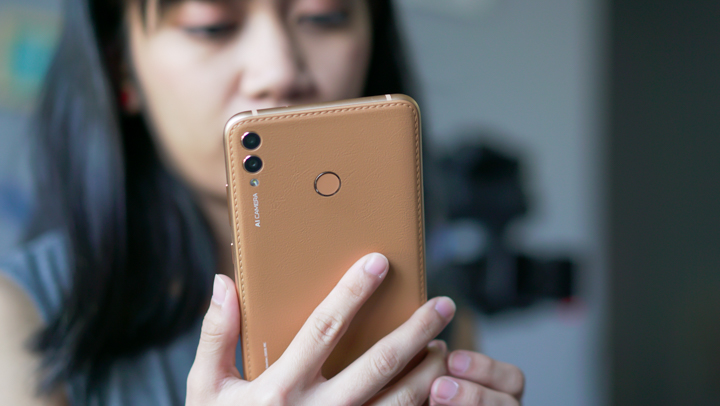 Flip on its back, and you’ll find the dual 16MP + 2MP cameras and LED flash while the fingerprint scanner is placed right beside them. Just like with the side buttons, the sensor is way up to a point where I have to adjust to the device’s size to reach and unlock my phone. I’d prefer it if they could bring it down just a bit further to accommodate people with small hands. 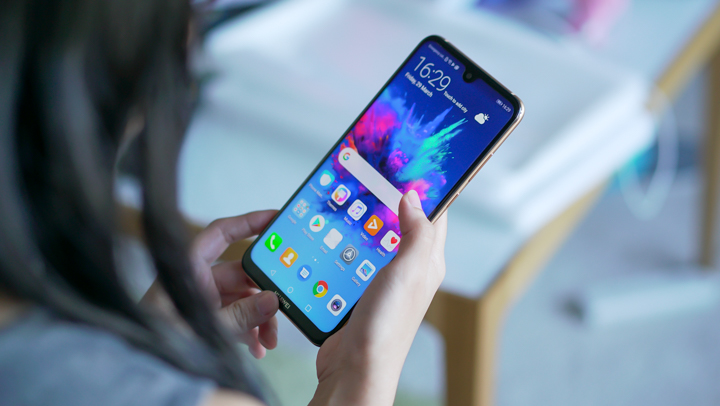 The Y Max is slightly heavy given its size and battery capacity, but it feels solid and premium. The leathery texture provides extra grip which is nice given its size. Of course, you will need both hands to navigate a device as big as this comfortably. And I wouldn’t recommend putting inside your jeans pocket as it is too large and you might risk bending it while sitting.

This is the part where the Y Max shines as it has a 7.12-inch screen, something that we would consider as tablet territory. It has a Full HD+ resolution which equates to a decent 350ppi and an 18.7:9 aspect ratio. Although the screen is massive, it’s immersive and still looks good thanks to the small notch (which can be hidden, by the way) and thin bezels. The screen is sharp, has accurate colors, and bright enough to be viewed under direct sunlight. Given the size, split-screening also looks and feels better. And if you’re like me who’s fond of playing games and watching movies, you will be delighted by the Y Max’s screen.

Another reason why I like using the Y Max for apps like Netflix, YouTube, and Spotify is that it has a dual speaker setup. In addition to the loudspeaker at the bottom, the earpiece also doubles as a secondary speaker. Quality-wise, the bass is weak, but it’s loud, crispy, and immersive which matches the experience the screen gives.

The Huawei Y Max sports a dual-rear camera setup consisting of a 16MP main and a 2MP for depth. The cameras are assisted with AI and come with features like Aperture mode, Beauty, Pro, Slow-mo, AR Lens, HDR, and Time-lapse. 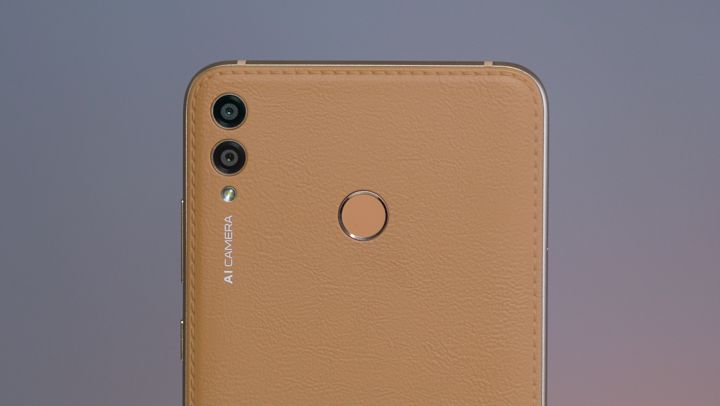 The image quality is a bit underwhelming as the colors and contrast are not as punchy as we want them to be, and prone to noise. The details are good though and look clean when zoomed in.

We have the same observation with the 8MP front camera, but it’s a bit worse in low-light as images tend to be softer and muddy. It’s also slow so there will be times that your selfies would come out blurred. We recommend taking selfies in bright light, and with a little bit of tweaking, you can still upload good images on social media.

When it comes to video recording, the Y Max can only shoot at a maximum of 1080p at 30fps. The quality is similar to still images and could use some boost in color and contrast. There’s no video stabilization, so the video is prone to shakes.

Running the software side is EMUI 8.2 based on Android 8.1 Oreo. It’s not bad, but it would have been nicer if it had Android 9.0 Pie out of the box. The UI is simple and uses multiple home screens to house the apps. 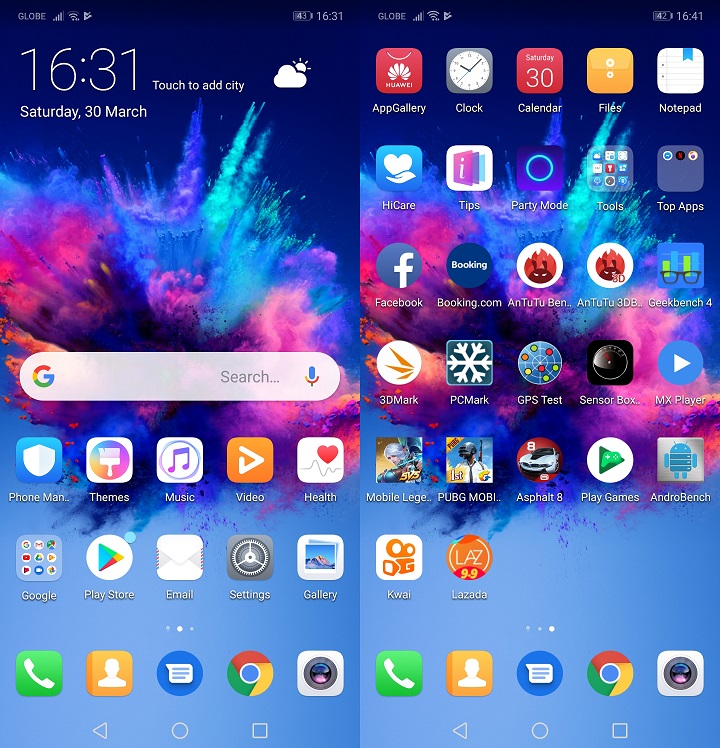 The left home screen features the Smart Screen which provides you with phone usage and news. You can customize the information shown according to your preference. 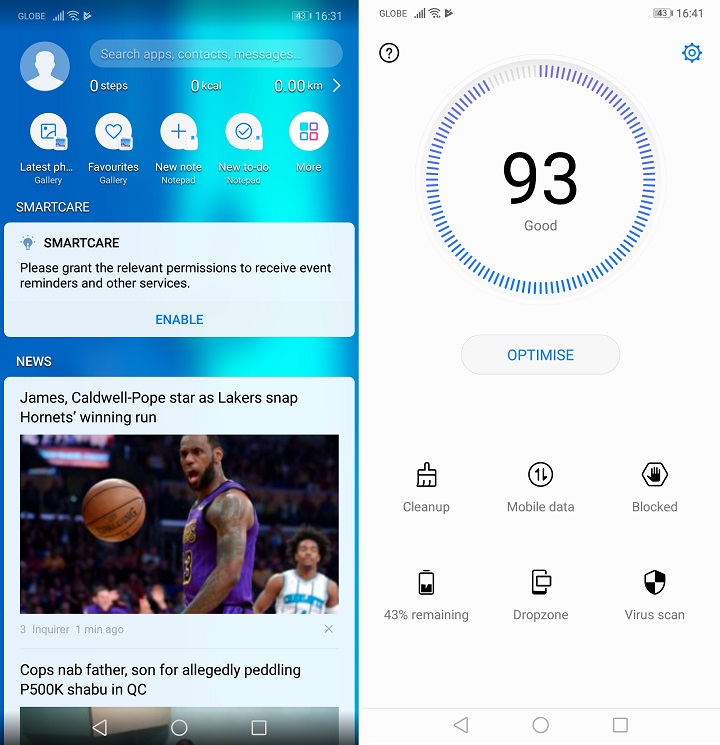 Other features include Phone Manager, AppGallery, HiCare, Party Mode for syncing music playback across other phones via WiFi, and Game Suite for a performance boost and uninterrupted gaming. 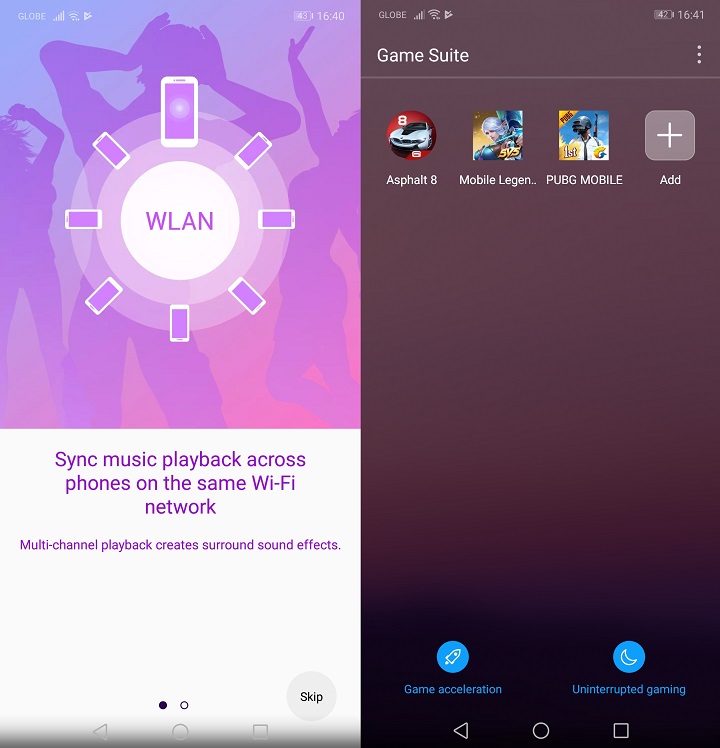 As for apps, the Y Max has the usual Google apps pre-installed, but there are others like Facebook, Messenger, Netflix, Camera 360, Booking.com, Kwai, and Lazada. You can uninstall these though, and you don’t have to worry about storage as it has a 128GB capacity with 111.34GB as usable.

Powering the Y Max is the Qualcomm Snapdragon 660 chipset which is pretty unusual given that Huawei usually uses Kirin chips. It also has a 4GB RAM which is plenty enough for tasks such as browsing, social media posting, streaming videos, file transferring, and even multi-tasking. Its overall performance is snappy and responsive given its mid-range processor and GPU. 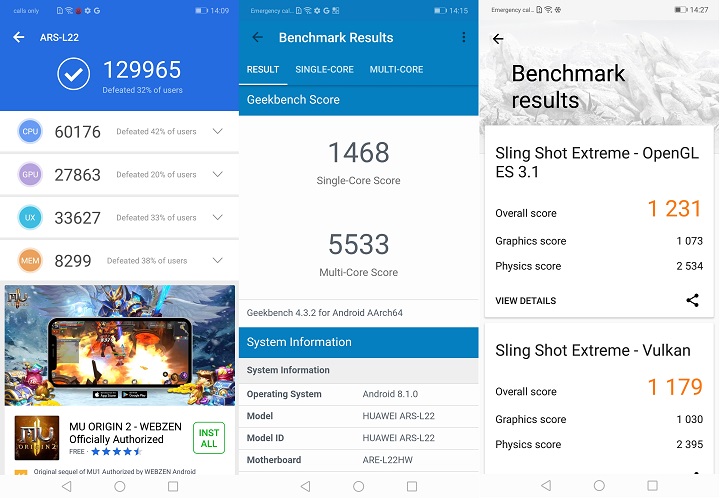 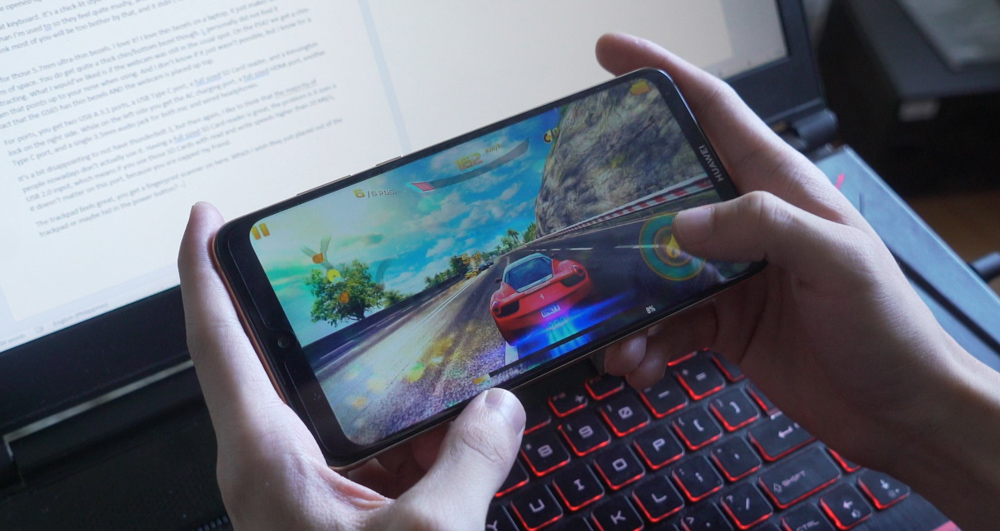 I can play Asphalt 9: Legends with ease on this device using the default settings but you can boost its frame rate by setting the graphics to the middle. Games such as PUBG Mobile and Mobile Legends perform very smoothly and thanks to the large display, I can appreciate the game better.

We have the usual connectivity features on the Y Max like dual-SIM with 4G LTE, WiFi, Bluetooth, and GPS. Calls are loud and clear and connect to mobile data quickly. Location-based apps like Google Maps or Waze work properly as well. It also has a gyroscope, so you don’t have to worry about AR applications. 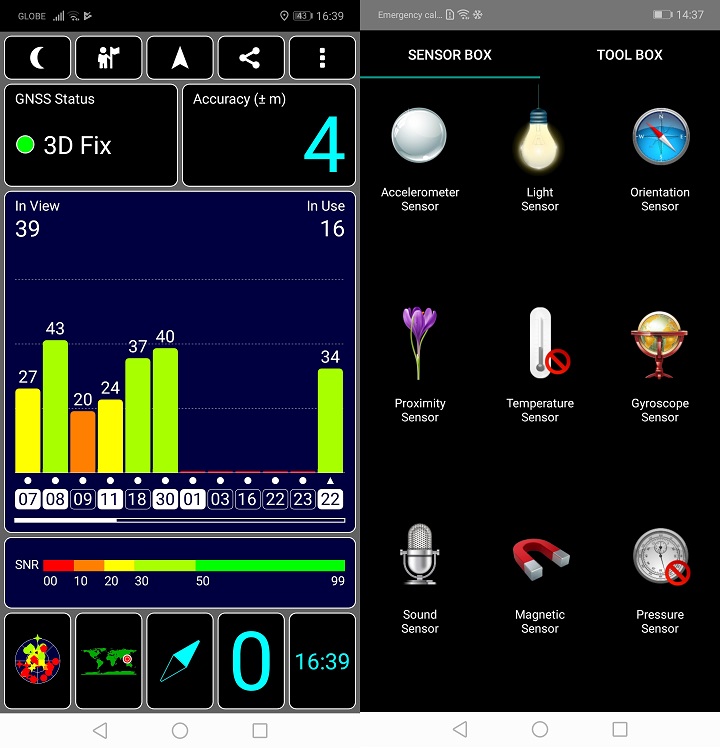 A phone of this stature should also have an equivalent battery capacity. Huawei didn’t disappoint and equipped it with a massive 5,000mAh battery. Mixed usage consisting of social media and light to moderate gaming, gave us almost two days of battery life. Our video loop test which involves playing a 1080p video on loop in Airplane mode at 50% brightness and volume with headset plugged in, yielded almost 28 hours of playback.

The Huawei Y Max is something that we would consider a next-gen “phablet”. Even though smartphones are going for 6-inch screens, the Y Max’s 7.12-inch is still quite a handful. Still, it looks good thanks to the faux leather design and slim bezels. Some may not like it, and that’s okay, but those who are looking for something great for binge-watching on Netflix or YouTube or for playing games, will find this device perfect. And it doesn’t cost a lot. For PHP 16,990, you’re getting a smartphone with a large screen, good performance, abundant storage, and a massive battery. So if you have these needs and fits your budget, we recommend this phone.

What I didn’t:
• A bit difficult to handle
• Underwhelming cameras

With inputs by Vaughn Chua.