Huawei’s first entry-level smartphone for this year has launched and it is a reboot of the Y6 back in 2015. It sports good specs with a neat addition of a face unlock feature which is quite a surprise for its price range. See how the Y6 2018 fares in our full review below. Let’s begin! 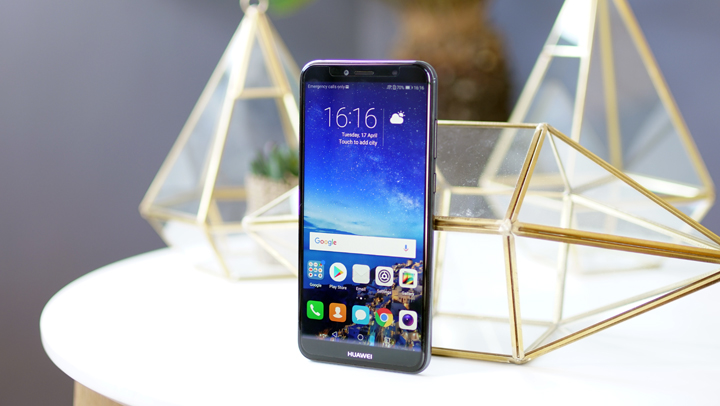 Before we begin, watch our unboxing and hands-on video for the Y6 2018 here:

The Y6 2018 doesn’t have major design changes from its predecessor. What appeals to us, however, is its black-colored body with lesser bezels that simply looks elegant and premium for an entry-level smartphone. Its sleek unibody also increases the aesthetic value of the phone.

On the front is a 5.7-inch screen that is covered with pre-installed screen protection except for the 5MP front camera, call speaker, and LED flash. Huawei remains consistent with their Y6 models by placing their brand name just below the screen. 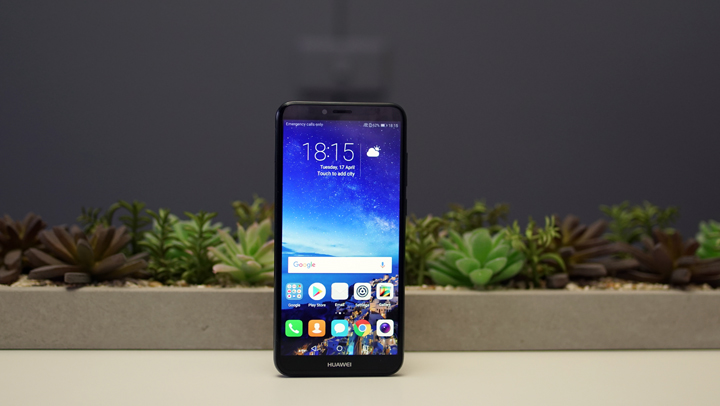 Looking on the left is the lone card tray that houses the dual-nano SIM card slots and its dedicated slot for a microSD card. We always prefer triple card trays over hybrid ones, so this is a plus for us. 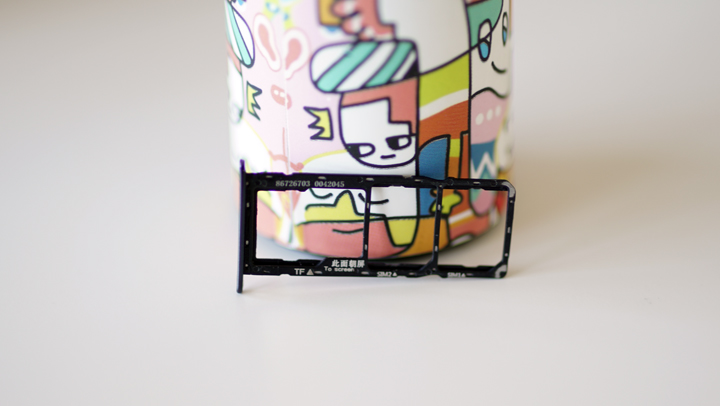 On the right of the screen are the standard power button and volume rocker pairing. The buttons were not that hard so it’s easier for us to lock the phone or adjust the device’s volume. 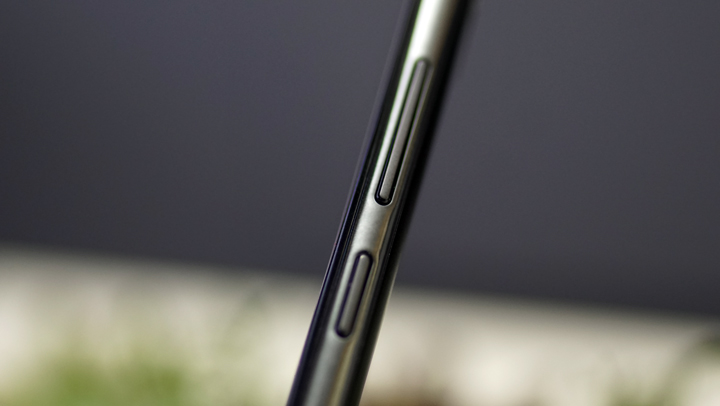 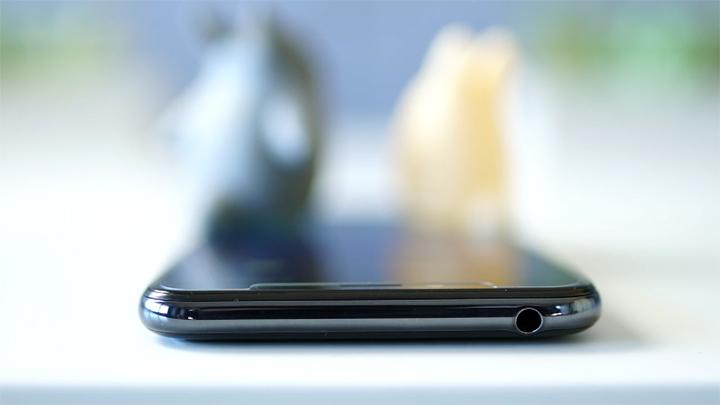 Below the screen are the main microphone, micro USB port, and the loudspeaker. 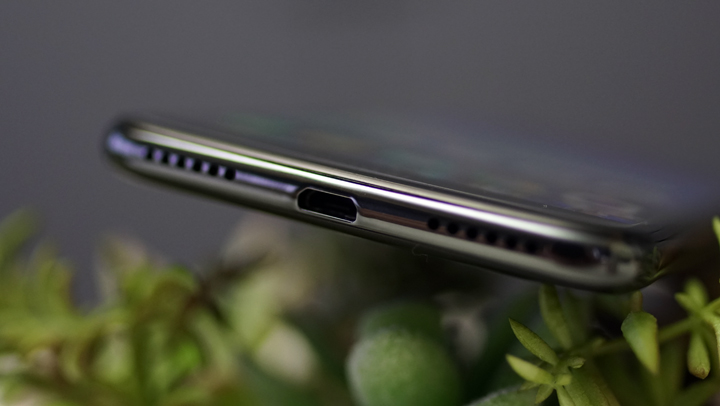 And finally, the back has the 13MP rear camera with an LED flash and nothing more. 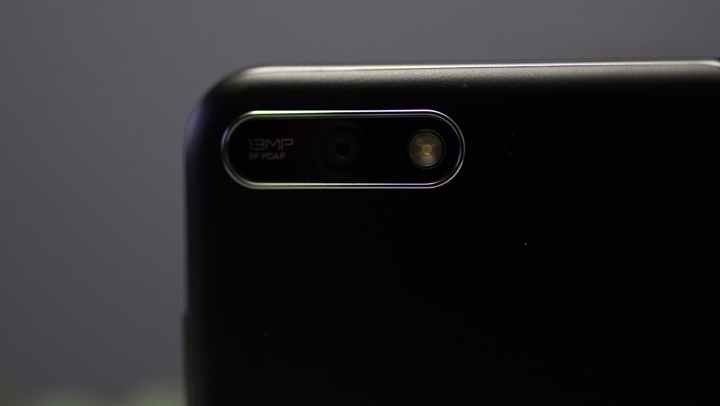 The Y6 2018 feels solid, light, and slim in the hands. We had an instance when we forgot where we put it but after searching, we found that it was sitting in a mini gap in our sofa (that’s how slim it is). 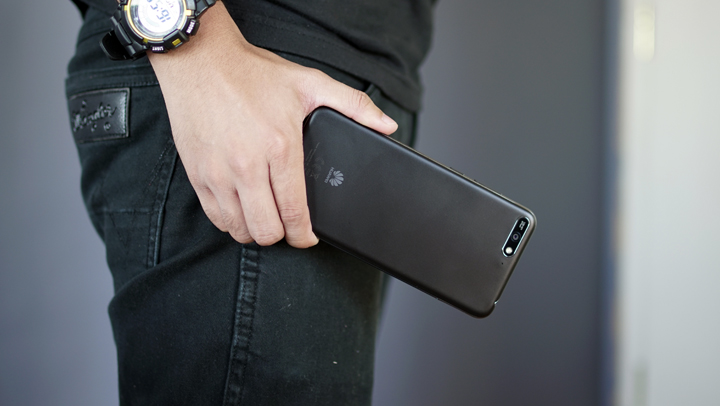 Its polycarbonate back panel with matte-finish makes it easy to grip the device firmly without any slips. What we also liked about the phone is it repels smudges and fingerprints which is another plus for us.

The Huawei Y6 2018 has a 5.7-inch HD+ (1440x720px) IPS LCD display that equates to a 282ppi pixel density. Huawei upped their game by equipping this smartphone with an 18:9 aspect ratio which is the current trend nowadays. The display has decent color accuracy with good viewing angles. Usage under direct sunlight looks fine but the brightness should be at the maximum. 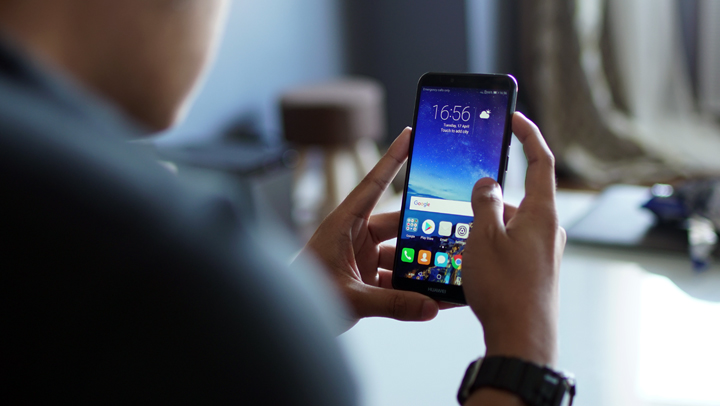 When it comes to audio, quality is decent enough to be used in a closed room. Its highs and mids are okay but the lows are subpar. Unfortunately, the package that we received didn’t have any earphones.

The Huawei Y6 2018 may be an entry-level smartphone but it has a competitive quality for its price. It is equipped with a 13MP rear and 5MP front cameras. It has main modes like Photo, Video, HDR, Panorama, All-focus, Filter, Beauty, and Watermark.

The images produced by the 13MP rear shooter is good enough for social media uploads. The colors are inconsistent, though, and can sometimes look washed-out or overly artificial. The photos produced are subpar under low-light conditions so make sure to have good lighting before taking any shots.

The front 5MP shooter has the same case with its rear camera. Quality is still decent if there is a good lighting and if it’s not against the light.

For video recording, the device can shoot up to 1080p at 30fps in MP4 file format. We noticed that it does not have video stabilization and its autofocus can get jittery.

Running the software department is Emotion UI 8 based on Android 8.0 Oreo. It looks simplistic and clean, making it pleasing to the eyes. By default, there is no app drawer but users can freely choose to have one in the settings. The basic navigations are straightforward. Users can easily slide left, right, up, or down in the home screen. 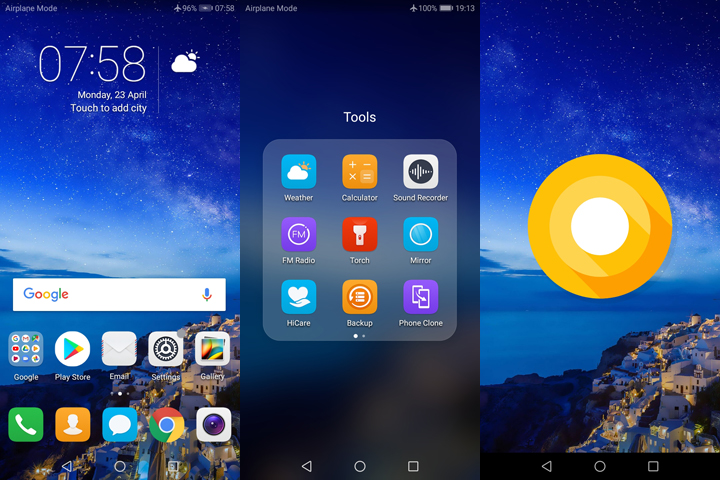 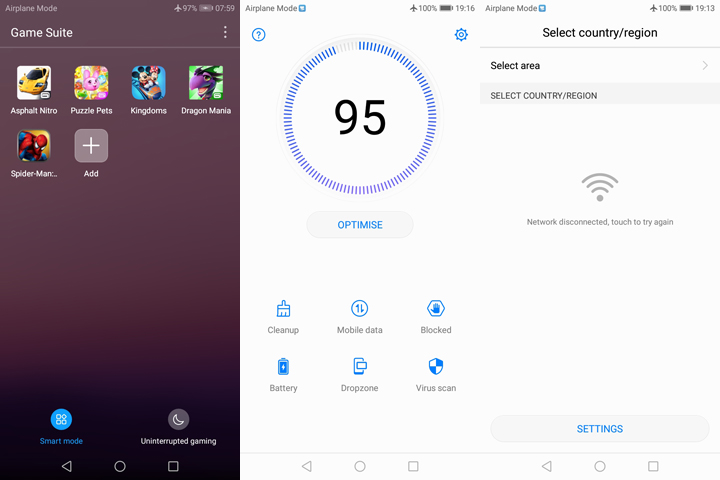 Out of 16GB of internal storage, there’s an approximately 9GB free storage for your own use but that is already low for us. We suggest that users should use a microSD card for expanding its storage.

The Y6 2018 is powered by Qualcomm Snapdragon 425 processor, Adreno 308 GPU, and 2GB of RAM. The processor used is outdated already, so we did not expect above average performance from it. Simple navigation is smooth but opening Google Play or any resource-heavy applications will cause a delay in touch responses= and would sometimes freeze for a bit. We were quite impressed with the implementation of the face unlock feature. The unlocking sequence may take around 2-4 seconds to work but even under low-light conditions, it can still detect our faces if we’re close enough to the screen’s light source. 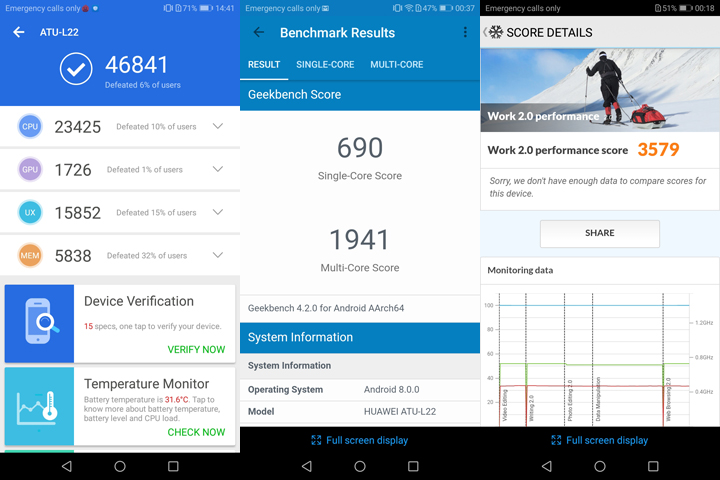 Here are the benchmark scores that we got:

Games such as Sky Dancer and Rules of Survival can be playable in this device with visible frame drops. We also noticed that it warms up after some time but it shouldn’t be much of a concern. 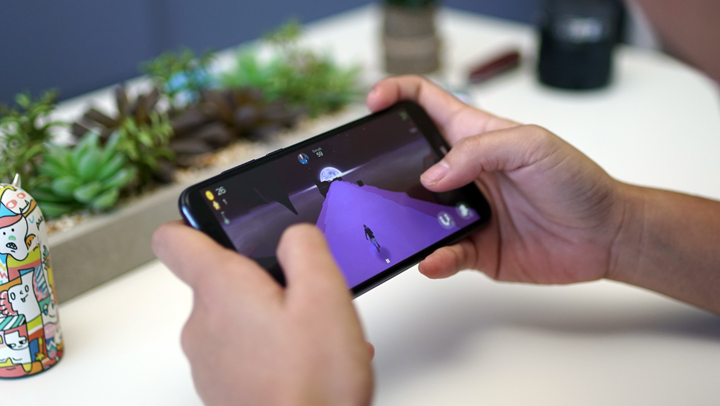 The Y6 2018 has Bluetooth, Wi-Fi, 4G LTE on SIM 1. Connecting to mobile data and WiFi network didn’t take long. We didn’t encounter any problems with the call quality as it is loud and clear. We were quite disappointed on the sensors that are available in the device as it only has Accelerometer, Light, Proximity, and Sound sensors. We had problems when using Google Maps and Waze as the device doesn’t have a Magnetic Sensor but the locations should still work regardless. 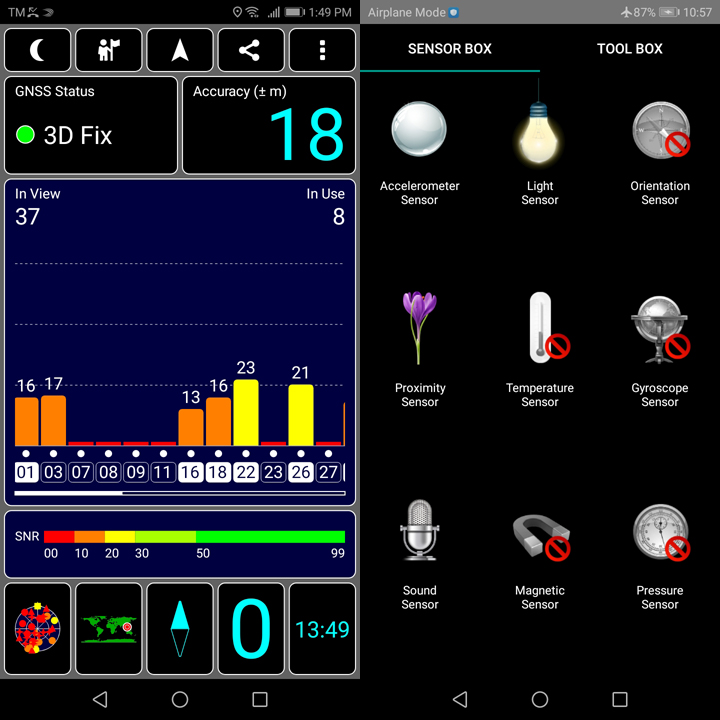 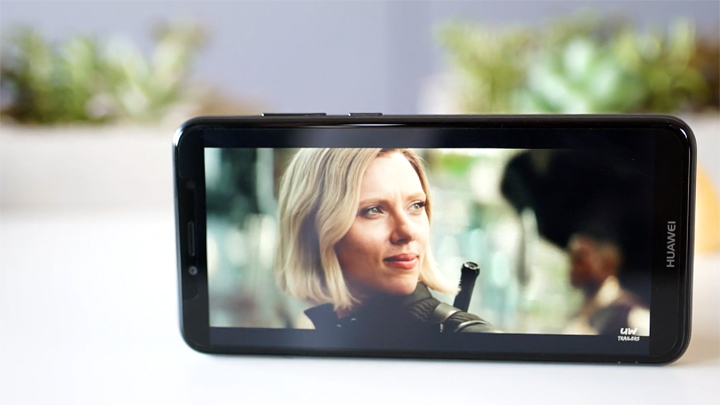 The Huawei Y6 2018 has its imperfections but for an entry-level smartphone, its specs are competitive. While its performance is average, the good viewing experience, camera quality, and face unlock capabilities are what it makes the device unique than the other smartphones out in the market. This device is one of our recommended smartphones if users are tight on budget.

Where can I buy this battery

me and my wife bought this the moment it became available in the country. and it was the worst decision we did. i think you shouldnt buy something that dont have any review yet. it always hang. try opening the camera and it would take you years before it would open, no exaggeration. as in! then the taken photo is always broken. any application always hangs or immediately closed. do not buy this phone! it sucks so much.

Very laggy and Hangs on me everytime with games I play on my Hk and K cp witch is a low quality and phone. My HK and K performs much better than Y6 witch is quite expensive. Not satisfied at all

NAKAKAINIS LAGING NAGAHAHANG, HINDI WORTH IT YUNG BAYAD , SAYANG YUNG BRAND . I AM ASKING FOR A RESPONSE OR FAST ACTION TO AVOID LAG PLEASE TAKE AN ACTION AS SOON A POSIBLE!

This phone is so laggy, and the phone it self so classy but sad to say it so slow and mabagal hahahaha lag, baba internal memory lalo na kapag nalagyan na ng ganes etc super bagal na

It looks classy and good but the device is super laggy. I think its because of it running on Oreo with a 2GB RAM. I bought it because of the camera, cause I need it on my online business, but it takes seconds to capture and then it hangs. Not recommended for gamers and multitaskers. Super laggy phone. I am so dissapointed :(
I wanted to sell it and get another brand, but I couldn’t because I got it for installment and it will run for 9mos. :(

This phone is not worth to buy. It is slow, it keeps on freezing or hanging most of the time, how much more if you have an SD card in it and few low memory apps. Frequent restarts or optimize is needed in my experience. The camera is laggy or I say you’ll have to wait a minute or more for the camera to start or worse it will just present you a black screen. If you have to take a shot it will take a few seconds to take a snap, in short you just lost the moment to capture it. Aesthetic is good, looks good, but the performance is very disappointing. You need a lot of patience for this phone. Not recommended for people on the go or even on emergencies.

I’m not expecting too much of this phone since this is just a low-end budget phone, but my Oppo A37 is much better than this. Poor performance for a budget phone category.

Why i cant receive file and send thru share it?? Plzz make some update

both are laggy and prone to force stop

I’m so disappointed, don’t buy this product. This product looks good but the performance is failure.

-unsuccessful multiple file transferring from phone to desktop using usb cable.
-performance is laggy when connected to wi-fi.
-bloatware is disappointing.
-charging time is very long (charging my phone from 16% to 80% for 3 hrs)

I am formerly using zenfone 2 (asus brand), when my asus phone broke I immediately buy this phone, after 4 days the disappointment comes.

It doesn’t work in transferring files when using a sharing app. How to fix it?

hey yugatech is the camera too short? how many hours only?