LG G3 display compared against Galaxy S5 and One M8

LG G3 display compared against Galaxy S5 and One M8

As we get closer and closer to seeing the LG G3, more and more details have been surfacing regarding the South Korean manufacturer’s next flagship smartphone. Just recently, LG itself has leaked the dimension of its upcoming handset and a mockup was made based on this to determine how big the display will be. 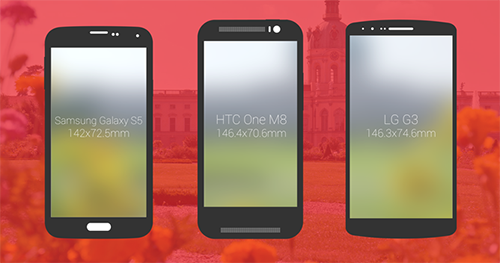 The mockup puts the LG G3 side by side with other current flagship phones like the Samsung Galaxy S5 and the HTC One (M8). In terms of screen resolution, the G3 reigns supreme since we know that it will be sporting a qHD display with 2560 x 1440 pixels, while the two only sports Full HD at 1920 x 1080 resolution.

The LG G3’s 5.5-inch display is undoubtedly larger than the S5’s 5.1-inch and One (M8)’s 5-inch screen, and you might think that this is just way too big since it’s almost as big as the Galaxy Note 3 phablet’s 5.7-inch panel. Although this may be the case, the mockup shows that the One (M8) is even taller than the G3. LG managed to do this by widening the display to make use of more space, while also reducing its bezels to a minimum.

What we’re seeing here is that even though LG equipped the G3 with a far larger display than its peers, it looks like it won’t be that hefty and will still be manageable with one hand. They’ve also managed to squeeze in a bigger 2K resolution into its screen so we can expect the G3 to have one impressive display when it’s officially released.