Mid-Range Bang For Buck: Lenovo A7000 vs Alcatel Flash Plus

Mid-Range Bang For Buck: Lenovo A7000 vs Alcatel Flash Plus

With the recent launch of the new Lenovo A7000 in the country, we’ve thought of pitting it against Alcatel’s mid-range powerhouse, the Alcatel OneTouch Flash Plus, to see which of them offers more value for the consumers’ money.

As far as specs are concerned, the Lenovo A7000 shares a lot in common with the Alcatel Flash Plus. Both handsets sport a 5.5-inch 720p IPS display and runs on an octa-core MT6752M processor from MediaTek. 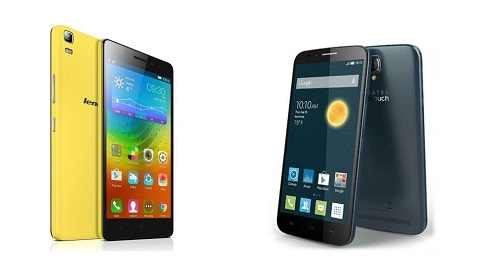 The Flash Plus, however, have some minor advantages over the A7000 like the inclusion of Dragontrail glass laid on top of its actual display, support for LTE connectivity on both of its SIM card slots, and twice the amount of internal storage.

Furthermore, Alcatel’s mid-range smartphone trumps the newly-launched A7000 in the battery and imaging department. The Flash Plus is powered by a sizeable 3500mAh battery pack, compared to the 2,900mAh battery found on the A7000.

As for the camera, both of the Flash Plus’ snappers have higher resolution compared to those on the A7000, not to mention Alcatel used a Sony IMX214 sensor for the Flash Plus’ rear camera which, in theory, should be better than the A7000’s 8MP rear shooter.

Surprisingly, despite of the advantages that the Flash Plus have over the A7000, it’s still Php900 cheaper compared to its competitor. The Alcatel Flash Plus will retail tomorrow at Lazada for Php6,490 while the Lenovo A7000 will hit the online store’s shelves for Php7,390 starting on May 21.

All is not lost though for the Lenovo A7000 as it has a few tricks up its sleeve to compensate for some of its shortcomings. For one, it’s running on a newer version of Android (Lollipop) and, most importantly, its got a fancy Dolby ATMOS speaker setup.

Is the Dolby ATMOS speaker and Android Lollipop worth the extra Php900? We’ll leave the answer to you. But for all intents and purposes, we think that the Alcatel Flash Plus will walk away as the victor in this brief comparison.

If you haven’t already, you can read our full review of the Alcatel Flash Plus here. You can also check out our short first impression of the Lenovo A7000 on this link.