Official renders of the Motorola Moto X30 Pro have surfaced online showing a 200MP triple rear camera setup, a punch-hole display with curved edges at 53° curvature, and up to 125W charging rate. Its rear camera module one large lens, and two smaller lenses with dual flash, and the text imprint says 200MP 1/1.22″ OIS which means it’ll have an optical image stabilization.

The renders also show that the back panel is similar to a sandstone finish, with the ‘M’ logo and Motorola’s moniker just below it. 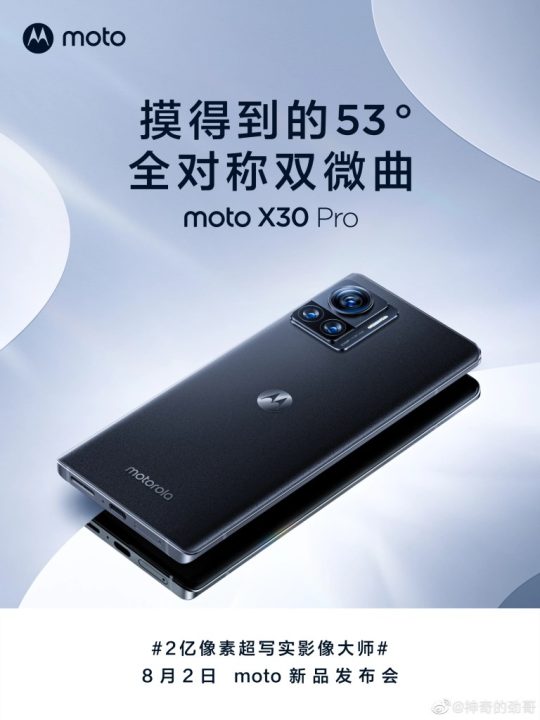 There’s nothing on the left part of the device, while at the bottom we see its USB-C port, the SIM card slot, a dot of microphone, and the speaker grill.

Based on our previous report about a ‘Motorola Frontier’—that closely resembles the key specs of Moto X30 Pro—this will be the world’s first smartphone to feature Samsung’s 200MP ISOCELL HP1 which was unveiled in 2021.

Moreover, according to a report, its brains will be a Snapdragon 8+ Gen1 that will also support public protocols 100W charging rates. And the 125W GaN charging brick that weighs only 130 grams that is expected to be included in the retail box. On TENAA, the phone is reportedly configured with up to 16GB RAM and 512GB storage, Android 12, and will be available in nine colors.

Moto X30 Pro’s launch will be right next week on August 2nd. We expect more information to come, and stay tuned for our updates.