Do you remember the times when phones had extremely long life cycles? Or even when mobile technology didn’t advance so rapidly? Those were probably the times when the dumbphones were prevalent.

A dumbphone is defined as something that lacks the features of a smartphone. Mostly, these dumbphones only serve texting and calling as their purpose, but rarely we see some twists in their production; some manufacturers even include a mobile flashlight in the device. It might not be very pleasant to hear or read, but so far it’s the term that is most common. Filipinos might even say “pang-tawag at pang-text lang”. 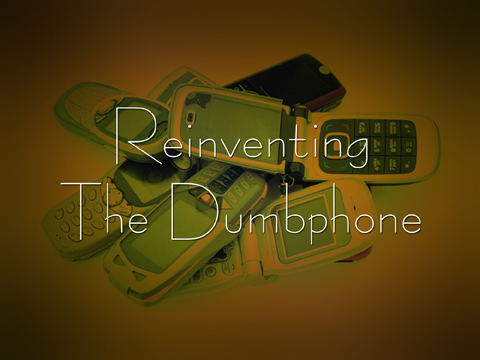 While some people are very focused on smartphones, there exists this market that we rarely consider innovating upon. We think it’s a very good idea nonetheless to reinvent the average dumbphone – especially in the Philippines.

If you didn’t know, the Philippines is considered as the texting capital of the world. Think about it: do you think that the majority of texts sent come from smartphone users?

While it’s partially true that most people who use dumbphones are those that don’t have the extra budget, it is also true that some people just like to own a dumbphone to lessen the threat of holdups and theft.

Most manufacturers in the Philippines are taking advantage of this situation – the battle however is in price and in quality. Most dumbphones available now are almost entirely the same as the ones released years ago; only the designs keep changing. Some phone manufacturers might not be interested in this idea, since it may damage the premium images that they have established, such as HTC and Apple.

When most companies are competing with lower prices, why not create something that costs a little bit more while adding some killer ideas such as strong casings, batteries that last up to more than a week, a mirror as a back cover or something basic like a very comfortable QWERTY keyboard?

Some companies have already tried these distinguishing ideas, but none have become a major success so far. They, however, caught the attention of some people. Examples include the John’s Phone – a phone made in the Netherlands that only makes and receives calls and the OwnPhone – a very customizable phone that only calls the people most important to you.

These phones aren’t available locally but people could surely get a glimpse of how some dumbphones abroad differ in their own way.

We were deeply thinking about the Nokia 3310 for some reason. Nokia could revive the aforementioned dumbphone and make it a hit, especially with all the traction it is getting. From that idea alone, maybe we can see a true successor to the “unbreakable” phone. This could be similar to Motorola’s revival of the Razr, however that ended up being a smartphone.

Think of the article as some sort of shout out. As people enjoy choices and different angles through smartphones, why not with dumbphones? If you had the chance to reinvent the dumbphone, how would you pull it off? Feel free to write your answers, comments and opinions on the matter down below.