Vivo Mobile is getting pretty aggressive here in India and with their recent entry in the Philippines, we will likely see these new models being released in the country very soon. The two new smartphones they annoucned today here in Mumbai is targeted towards the mid to upper-mid level categories.

Vivo is tagging the V3 Max as a faster than fast smartphone, having a dual-charging chip that allows for very fast charging. Vivo claims the V3 Max can do 2 hours of music playback for only 5 minutes of charging. The power button and volume rocker are on the right side, SIM card slot on the left, 3.5mm audio port up top and microUSB port at the bottom.

The front panel is completely covered in Gorilla Glass with a slight curve at the edges (commonly referred to as 2.5D Glass). The Vivo logo is prominent along the top corner near the 8MP front-facing camera while the old capacitive buttons are flushed towards the bottom corner. 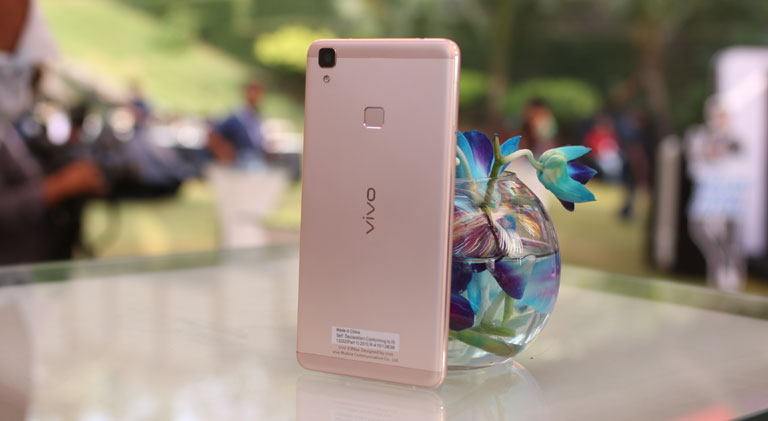 At the back is the 13MP camera near the top right corner with a single LED flash just below it.

The fingerprint scanner is near the middle and slightly depressed. There are polycarbonate strips at the top and bottom end that have a slightly different hue from the mostly metal body. This is implemented for better signal reception of the built-in radio modules.

The Snapdragon 652 is actually a fairly capable chip that is paired with an Adreno 510 GPU. In some benchmarks, it’s even better than the Snapdragon 808 chip which is found in the LG G4 and the LG V10.

The device comes with a custom Funtouch 2.5 OS that is based on Android Lollipop. It looks pretty interesting and the UI is actually pretty close to iOS especially with that flat layout and shortcut screen drawn from the bottom.

Antut benchmarks showed really good scores with the Snapdragon 652 getting over 72,000 points.

Here are sample of photos taken with the V3 Max:

Vivo is expected to release the V3 Max im the Philippines first, sometime around the end of April. There is no suggested retail price yet but the price in India is about Php16,700 when directly converted.