18:9 displays and selfie-centric setups are this year’s craze for the smartphone market, and one by one we saw brands rush to release their contenders. Last month it was Vivo who entered the fold and they created a buzz with their latest offering. The company not only equipped their front-runner with an 18:9 display but also with a 24-megapixel front camera (talk about a formidable combo). And now, we’ve put the device through its paces, so without further ado here is our full review of Vivo’s V7+. 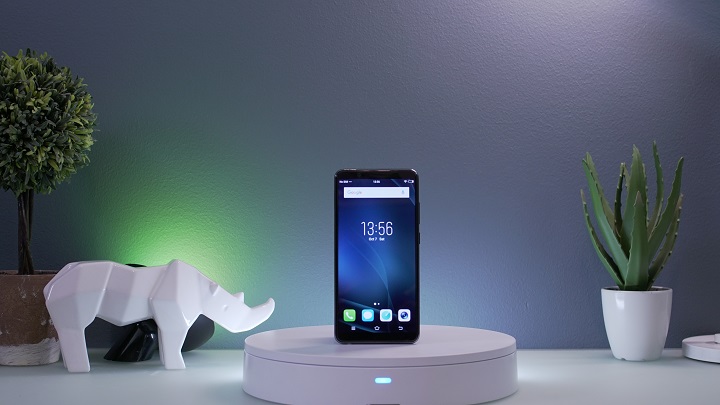 The V7+ follows Vivo’s curvy design structure but is perhaps their most beautifully constructed smartphone yet thanks to its slim design and almost bezel-less display. On the front, you’ll be greeted by its 5.99-inch IPS display with a resolution of 1440 x 720, which equates to 267ppi. Due to its slim bezels, the phone is able to achieve a good screen to body ratio of 84.4%. Above the display, you’ll find the 24MP f/2.0 front shooter accompanied by the receiver, light sensor, and dedicated LED flash. Since the device uses on-screen navigation the bottom part of the display is all bezel 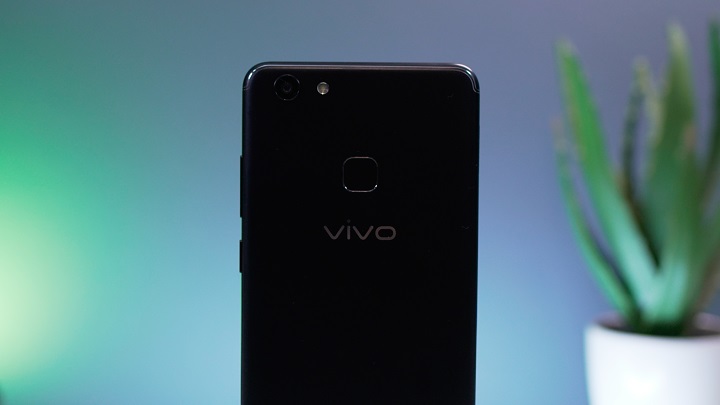 Flip the phone over and you’ll see the 16MP OmniVision sensor f/2.0 rear camera, dedicated LED flash, fingerprint scanner, and Vivo’s logo. You’ll also see the intricately placed chrome accents at the top and bottom that add a little bit of flare and aesthetic to the device. Sadly the rear camera is quite vulnerable as it protrudes from the phone’s back.

The right side of the device houses the power button and volume rockers, while the left side is home to a lonely SIM and microSD tray slot. Vivo strayed away from the more common Hybrid SIM card setup and opted to instead use a tray with dedicated slots for two nano-SIMS and a microSD card. 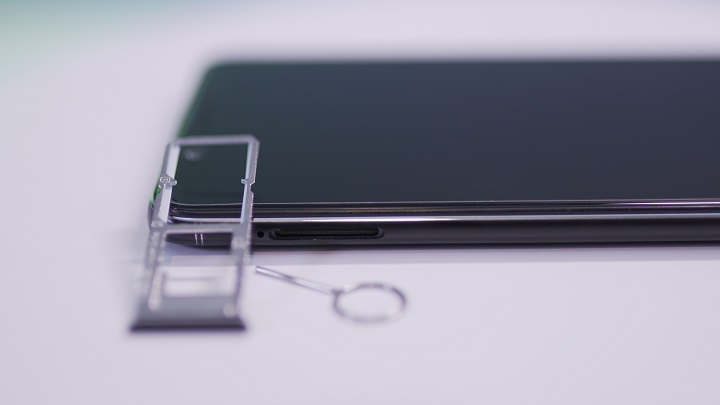 The top of the device is almost barren except for a noise canceling mic. Down at the bottom of the device are the micro-USB port, 3.5mm headphone jack, mono speaker, and main microphone. 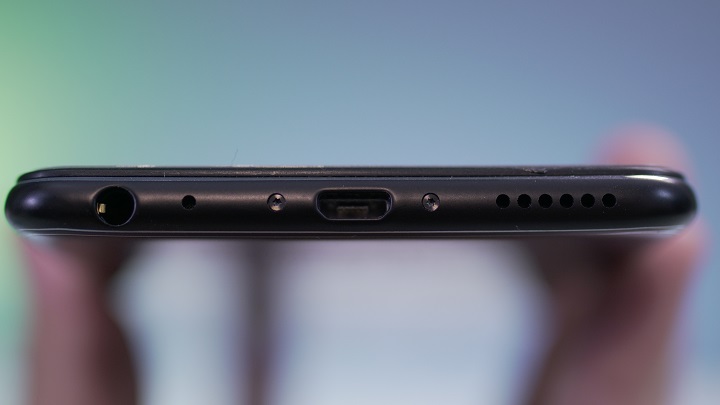 On the hands, the Vivo V7+ feels solid, light, and well built. Though easy to grip and hold, the finish of the phone is quite slippery so it’s still advised to handle the phone with care if you wish to use it without a case. The phone is not a fingerprint magnet but if you happen to have the Black colored one then it will attract smudges in small amounts especially when you hold it with oily hands. Thankfully, Vivo included a free jelly case in the box which will protect your phone from the said smudges and eliminate the risk brought about by its slippery finish.

Thanks to its 5.99-inch IPS FullView display, the Vivo V7+ has great screen real estate, viewing angles, and natural color reproduction but colors lack accuracy and tend to be a bit washed out. Another downside of the display is its low pixel density and HD resolution, users accustomed to a Full HD or higher resolution screen will surely notice this change in quality. Despite its drawbacks, the phone’s display is still good and provides a pleasant viewing experience. The screen’s brightness and Gorilla Glass 4 protection is also a plus as outdoor operation and screen durability is guaranteed. Its audio, surprisingly, is one of the phones strong suits. Thanks to its AK4376A Hi-Fi DAC, the phone produces great mids and highs and lows are also present, albeit slightly. There is also little loss in clarity at max volumes and it can go pretty loud. The included earphones are your standard ones which provide an average listening experience, though volumes are weak and the earpieces are bare which might irritate the ears after prolonged use.

The Vivo V7+ has a 16MP OmniVision rear camera with a dedicated LED Flash. It has a variety of camera modes such as Professional, PPT (PowerPoint), Time-Lapse, Ultra HD, Slow, Panorama, Face Beauty, HDR, Live Photo, and 9 Filters. The most notable camera feature here is the PPT, which will allow the user to easily take shots of PowerPoint presentations. 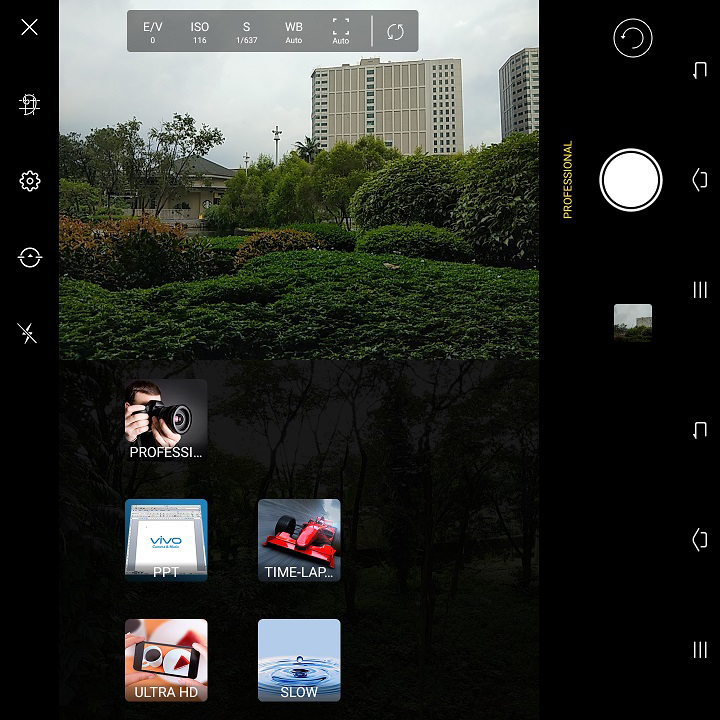 The star of the show though is not the rear camera but the front 24MP f/2.0 shooter. Like the rear shooter, the front also has a variety of camera modes such as Face Beauty, Group Selfie, Portrait Bokeh, HDR, Live photo, HDR, and 9 filters. Face beauty for both cameras has three settings, buffing which removes blemishes and spots on your face, skin tone which can change the color of your skin from fair to rosy, and Whitening which can brighten your skin; All of these settings have a slider for adjustments. You can toggle the settings for both rear and front cameras to take a photo via voice, touch, or palm, though we weren’t able to make the palm option to work. The cameras also have a setting to take shots in full view, normal view, or square view. And lastly, should you wish, you can add watermarks to your photos. Let’s move on to camera quality, the rear 16MP shooter takes decent photos in broad daylight and brightly lit situations. The HDR and Ultra HD modes were also effective in providing better detail and dynamic range to photos. Night shots and lowlight shots are also decent although there is evident noise on the photos, thankfully the dedicated LED flash provides great help in these situations. Macro shots are great as long as it is taken in brightly lit areas. See sample shots below:

Now for the star of the show, the 24MP front shooter takes great photos in broad daylight and brightly lit areas. Selfies are clear and crisp and details are spot on. The beauty modes provide added customization to your selfies. Thanks to its sliders, you’ll be able to gauge the right amount of adjustments to buffing, skin tone, and whitening. Maxing out these sliders are not recommended though as it will make your selfies look artificial, not to mention max buffing removes a fair amount of your face details. Sadly, night shots are not that great even with the help of the dedicated LED flash. The same could be said in low-light and indoor situations as noise in the shots become evident. Another fair warning, take care when taking shots in direct light sources like studio lights as the camera tends to overblow the lighting, as seen in our sample shots below.

As for video recording, it maxes out at 1080p in MP4 format. Video quality is good, stable, and the camera focuses well on subjects. Audio recorded in video, however, sounds a bit muffled. Watch sample videos below:

The phone runs on Vivo’s FunTouch OS on top of Android 7.1.2. Thankfully, Vivo included little bloatware in the V7+ such as Lazada and UC browser, which can be easily uninstalled. The device’s OS resembles Apple’s iOS to some degree especially its quick settings shortcut menu, which is accessed by sliding upward from the bottom of the screen. 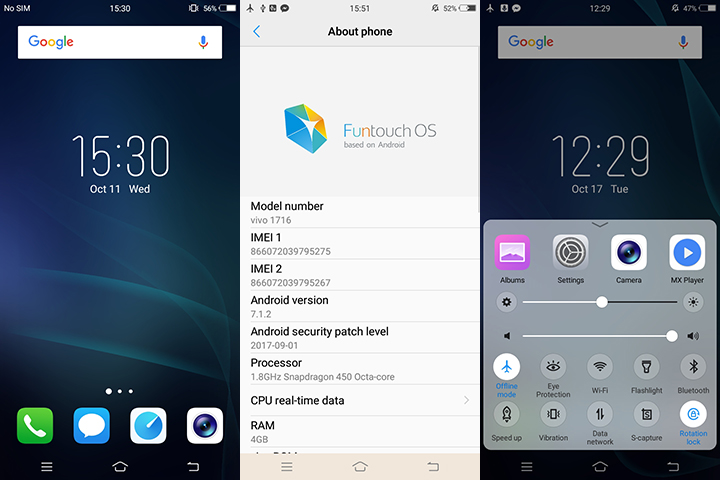 As for features, the V7+ has plenty. It has split screen functionality, one-handed mode, facial recognition, app cloning, smart click, and about a dozen or so shortcut gestures and actions. Here is a short summary of some these shortcuts: 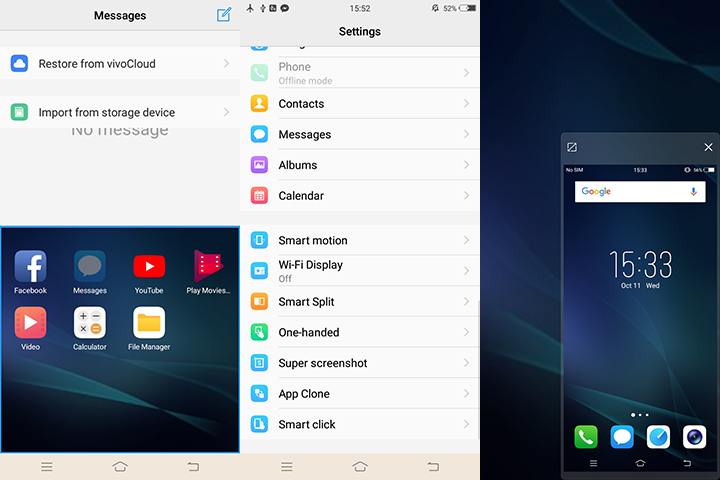 While it may sound gimmicky, most of these shortcuts and gestures actually work and provide users with added assistance in phone operation. As for its facial recognition, it works and is quite fast if it does, although we did experience a few hiccups here and there where we had to either close in or out for the phone to recognize our face. Surprisingly it can still notice you even in darkly lit situations but of course with less accuracy. 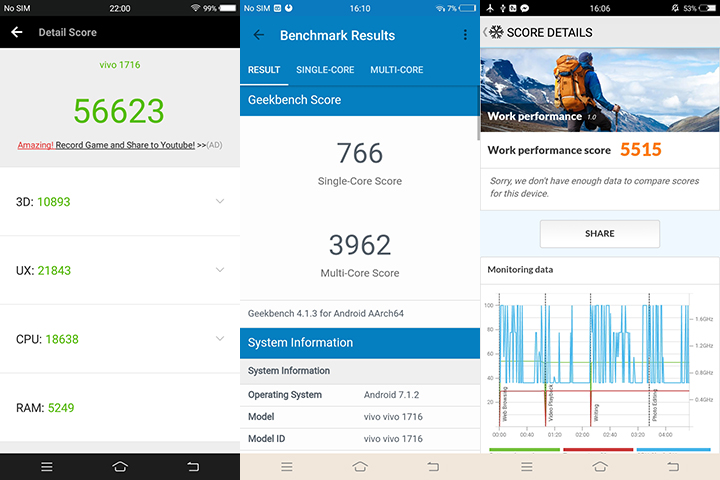 The device is powered by Qualcomm’s Snapdragon 450 clocked at 1.8GHz, Adreno’s 506 GPU, and 4GB of RAM. The phone performs well as apps install quickly and there is no noticeable lag during mundane tasks such as browsing, home screen navigation, and texting. Multi-tasking isn’t a problem either, due to the phones 4GB RAM. You’ll feel a need for more power once you move on to heavier tasks like gaming.

Here are some benchmark results: 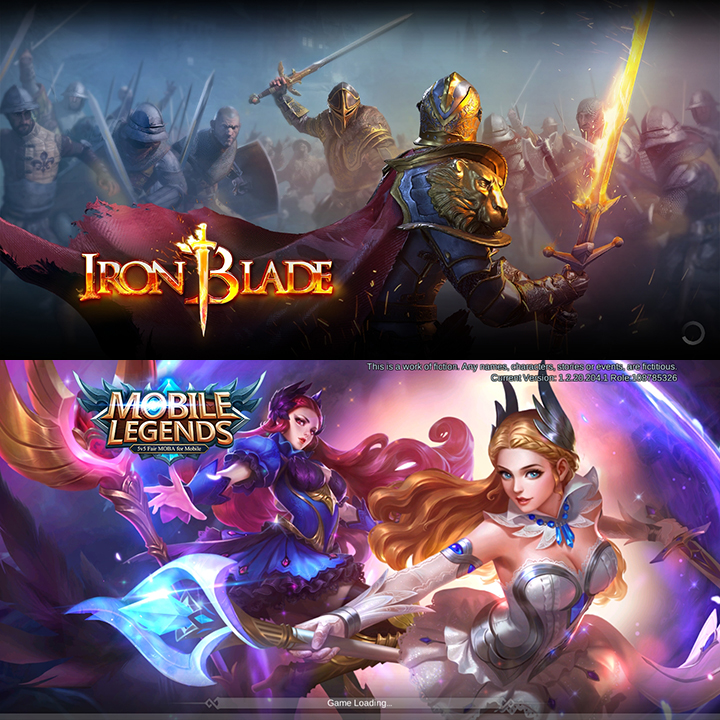 Speaking of that, light to moderate games like Candy Crush, Clash of Clan, Mobile Legends, and Vain Glory runs without a hitch on the device. Heavier games at max settings, however, like Iron Blade: Medieval RPG and Asphalt 8 airborne proves to be a challenge for the device, thankfully by lowering the graphical settings you’ll be able to enjoy better framerates. Heating is not an issue at all as the device doesn’t warm up to a noticeable degree after prolonged use.

The device’s call quality and signal reception are good. Basic connectivity is present as it has LTE, Bluetooth, and WiFi. GPS is quite accurate and would not be a problem in the long run. Vivo gave users the advantage of having a Dual SIM setup, and a microSD by ditching the Hybrid SIM setup, not to mention the device also has OTG support for added storage and convenient file transfers. 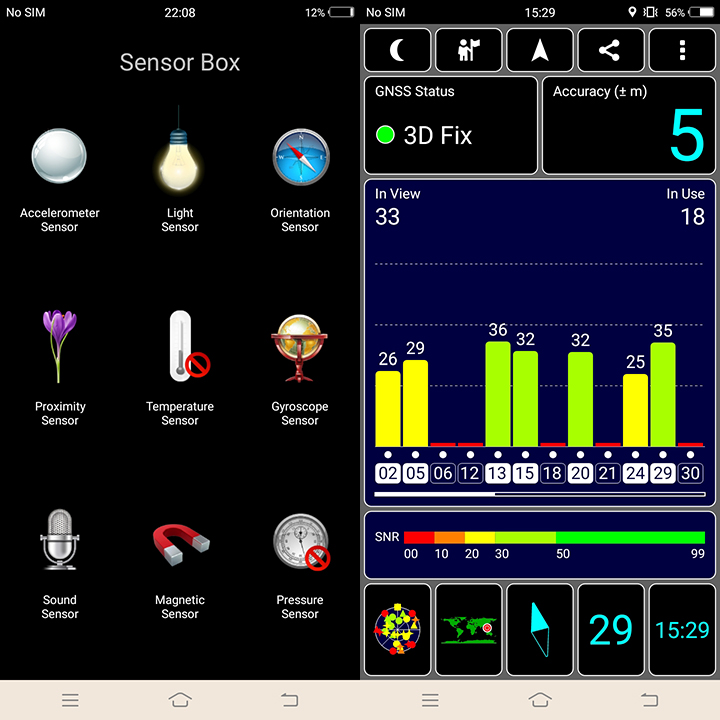 The phone’s battery life is short of impressive as it will comfortably last you a day or even more on a single charge with light to moderate usage. During heavy usage, it will still last you most of the day before the need of plugging in. Sadly, the phone doesn’t support fast charging as it took as almost 2 hours and 20 minutes to charge its 3,225mAh battery from 0-100%. PC Mark battery test ranked the phone at 16 hours and 36 minutes while in our standard Video Loop test the phone lasted 13 hours and 30 minutes. 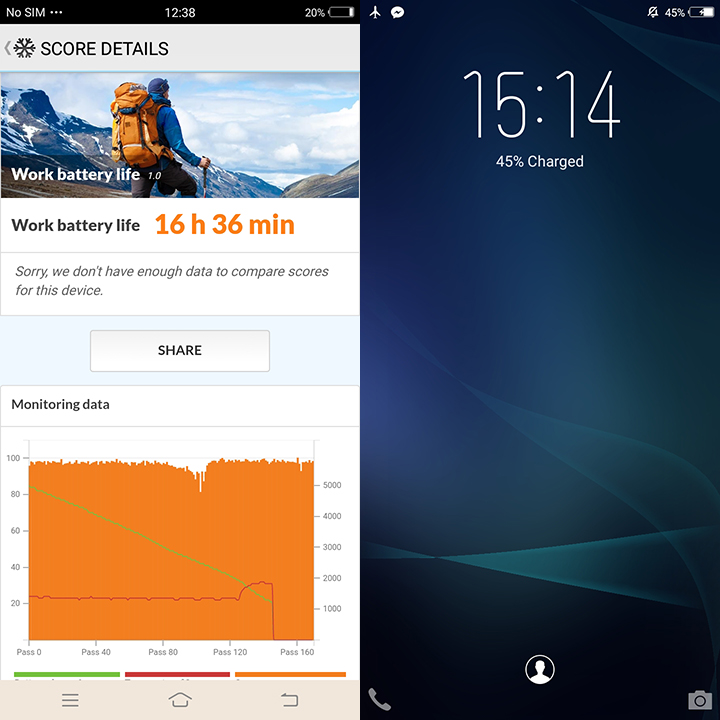 The V7+ certainly created a buzz during its announcement and release last month. And that buzz is somewhat warranted as the phone does provide its users with a big screen, great battery life, respectable speakers, and useful features. Although it would’ve been nice if Vivo upped the screen quality as having such low ppi on a screen this big has consequences such as loss of quality and pixelation. The front camera, though great at taking selfies, also has an annoying problem with strong light sources and performs poorly in low-light situations. 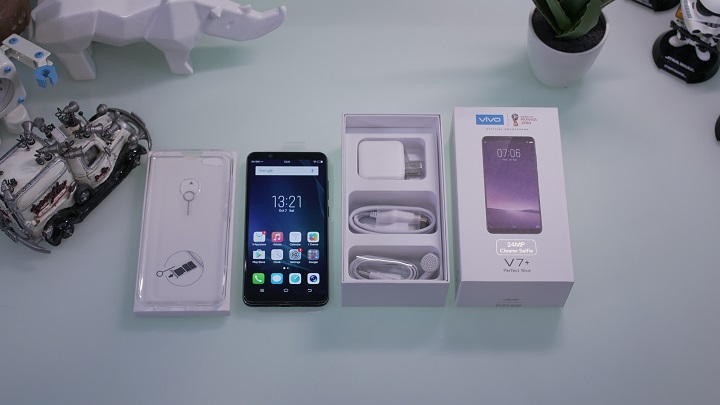 At a price of Php 17,990, the V7+ is in a territory where most competitors offer better devices in terms of specs to performance. Nonetheless, if you are the type of person that loves watching videos, taking selfies, and listening to music then Vivo’s latest flagship should certainly be on your list, not to mention it has a slew of gestures and shortcuts that make phone navigation a breeze.

You can buy the V7+ at any Vivo concept store, authorized retailer, or at Lazada.

Wow! that you for the review! your article was my tie breaker! Oppo f5 it is!! =)