Why You Should Not Buy the iPhone 14!

“Parang walang pinagbago” –that’s what most people say when I ask them whether they are going to get the new iPhones from Apple. As you already know, Apple just dropped four new products which include the iPhone 14 and iPhone 14 Plus, both powered by the year-old A15 Bionic processor. 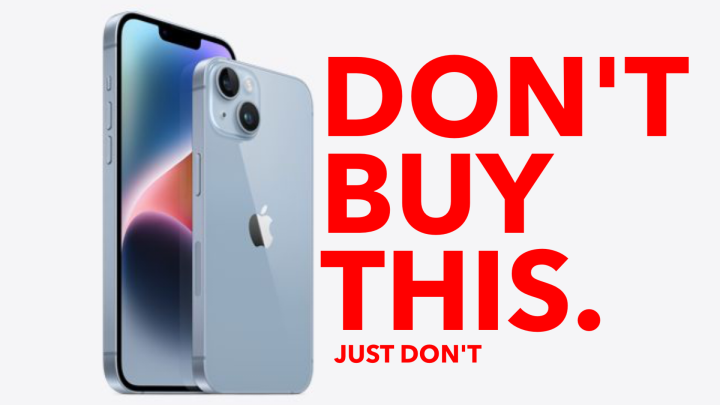 Sure, the iPhone 14 has new features like Action mode that made shaky videos stabilized, Photonic Engine, which on paper, increased the amount of details your iPhone can capture, and that satellite messaging which can be helpful to some people in supported states. But come to think of it, these new bells and whistles are not really substantial features that make the iPhone 14 worth the upgrade, people will forget that it even existed after weeks of using the phone.

In this article, we’ve listed some of the reasons why you shouldn’t buy the base iPhone 14 variant, particularly the Plus model and how it is one of the worst iPhone variants by far. Unfortunately, the baseline iPhone 14 models still have the old A15 Bionic chipset. Yeah, it is still powerful but, at that price? Having a 1-year-old processor on a brand-new (somehow) smartphone doesn’t even make sense. We would’ve appreciated it if Apple put in a trickled-down version of the new A16 Bionic with lower core count as what they did before with the base model iPhone 13. And, seriously? Some of the iPhone 14 features are more on the software side which means it can be present on the now older iPhone 13 Pro models. But yeah, Apple being Apple, don’t expect these features to be available through a magical software update. Yes I know, this might be a little off the field, but you can maximize your money by looking into other brands with the likes of Samsung’s Z Zlip or S22 line, Huawei P models, OPPO find series or you can also consider getting a Vivo X80 Pro. These smartphones do have much more innovative features up their sleeves, some of these brands have folding displays, 100x zoom, better specs and whatnot. There are also cheaper options like Xiaomi, realme, Huawei’s Nova line as smartphones from these manufacturers looks and feels premium even at a low cost. And yes, most of these smartphones have 120Hz display, Always on and a true full view display without that pesky notch. wink wink. The new iPhone models are here and that means huge price drops and attractive promos by telcos are on their way to lure people with older iPhone models to upgrade and also a good thing for Android users who wants to make the switch. By comparison, getting the base model iPhone 14 variant doesn’t even make sense. For starters, the base price of the iPhone 14 Plus starts at PHP 63,990 while the iPhone 13 Pro is at PHP 62,990 – yeah smaller but hey! At least you get a ProMotion display, triple camera setup, 28 hours of video playback, and has the same powerful A15 Bionic chip. Yeah you might have that fancy “Photonic Engine” feature for you camera which promises up to 2x better photos in low-light, but c’mon! What are you going to do with it if you can’t even have Night Mode Portraits, Macro and Apple ProRAW

You might be wondering by now on why we didn’t even mention the base iPhone 14 model? Well, because it is basically a slightly beefed up iPhone 13 with just a newer model name. And also, all they eyes are on the new Plus variant, so there you go.

I’m an Apple fanboy myself, and personally, it feels like this is the era of Apple where forgot to innovate, too much leaning of the saying “If it ain’t broke, don’t fix” type of mantra. While other brands has folding devices, 100x zoom capable cameras, even the new Always on Display on the iPhone 14 Pro Model has been on the Android space for years.

It is just a little funny that, sometime soon, people who love the brand might eventually look for something else as brand new products look and feel very repetitive when it comes to design and features.

And, even though I’ll be getting the new iPhone 14 Pro variant, that doesn’t get me to my knees and get so excited as it doesn’t felt like an upgrade to my iPhone 13 Pro. If not for the free upgrade, since I’m up up for retention on my postpaid plan, I’d be one of those people who will stick on my current iPhone and wait for the iPhone 15 Pro or whatever Apple will call the next iPhone model.

Nevertheless, at the end of the day, your own opinion still matters most as you’ll be the one forking out your hard earned cash for a brand spanking iPhone. Capiche?

the problem is, you are asking tech enthusiasts of course walang pinagbago sa kanila pero ask those who are changing phones after 3-4 years. Reviewers and tech enthusiasts change phone every year kase nga trabaho at kagustuhan yun pero for those making the bulk of the over all sales well most of them do not usually care… and for them this smartphone might be a big update. Check niyo nga Flip 1 to 4 o Z Fold 1 to 4 tapos compare specs diba mukhang wala ring pinagbago heck S20, S21 and S22 iba iba design pro internal small updates din naman nangyari… this problem of incremental update or same design is actually created by tech reviewers and enthusiasts only but for the majority of the buying population? Wala silang pake kase nga hindi naman afford kada taon magbago ng smartphone.