The Department of Science and Technology-Philippine Institute of Volcanology and Seismology (DOST-PHIVOLCS) has recently launched VolcanoPH Info. It is a volcano advisory app that will help the public understand geohazard warnings for preparedness. 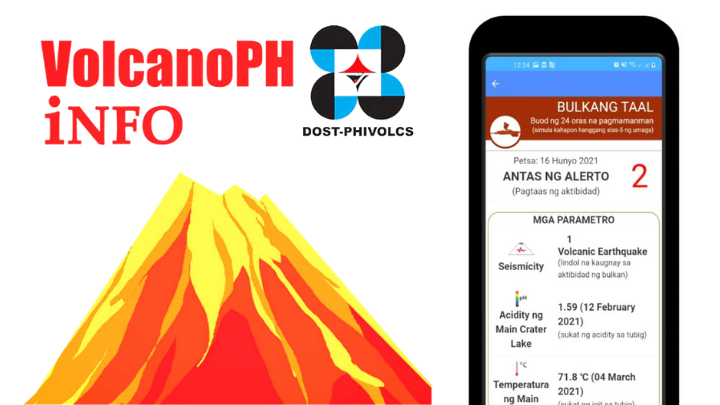 According to DOST-PHIVOLCS, this innovation is a real-time volcano advisory app, initially for Android devices, that provides infographic information on the latest updates of active volcanoes in the country. The alerts and information are written both in English and Filipino languages.

Moreover, the app aims to help users understand the current volcano status and its alert level warnings through the 24-hour real-time observation data gathered from the Volcano Monitoring Network records and actual field survey data analyzed by experts from DOST-PHIVOLCS. Additionally, app users may also select and click from a list of active volcanoes with alert levels on its homepage and be provided with the 24-hour summary containing its alert level warning status, monitoring parameters, and recommendations in the Filipino language.

What’s more, the push notification feature will inform the users of the latest volcano advisory before the updates are posted on social media platforms.

The information that the users can access includes the following: seismicity or the number of volcanic earthquakes monitored, acidity level and temperature of the main crater lake, the level of sulfur dioxide being spewed by the volcano, volcanic plume level, or the gas and particles produced by the volcano. Further, the app can provide other vital information to help users determine the risks like the following: ground deformation or the presence of cracks, sinking, or swelling of the ground that can be caused by gas, magma, or fluids moving underneath or the movements of the earth’s crust due to the motion along the faults.

“The system will enable the user to see the updates first on the app after we have posted it to the DOST-PHIVOLCS website and have disseminated the information to the proper authorities,” said DOST undersecretary and concurrent Officer-In-Charge of DOST-PHIVOLCS Dr. Renato U. Solidum Jr.

The VolcanoPH app also provides recommendations and comments in Filipino. According to Ma. Antonia V. Bornas, head of the Volcano Monitoring and Eruption Prediction Division of DOST-PHIVOLCS, her team plans to include advisories on various languages as warnings can be contextualized using local languages.

The VolcanoPH Info is now available on Android. However, the DOST-PHIVOLCS also revealed that the agency is planning on developing an iOS version as well.