The Pixel Watch comes in a sporty aesthetic with a 41mm wide and 12.3mm deep body weighing 36g.

The watch itself is made of stainless steel with four color combos – Matte Black with a black band, silver with either gray or silver bands, or champagne gold with a Hazel band that goes well with the greenish gray of the Hazel Pixel 7 Pro. Bands attach with a proprietary connector so standard watch bands will not fit in the Pixel Watch. Though Google offers a wide range of band types that include woven and leather options with metal bands that will be coming by Spring.

For navigation, the Pixel Watch has a rotating crown with a discreet hardware button above. Google has also added “premium haptics” making the haptic feedback feel more like clicks rather than buzzes. 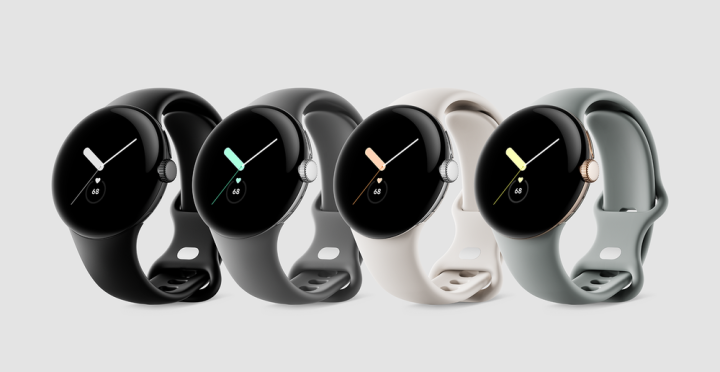 The Pixel Watch’s face is an AMOLED display that has 320 pixels per inch protected by a Gorilla Glass 5. In terms of brightness, it can go up to 1,000 nits, so glare and visibility won’t be a problem under direct sunlight. It is all powered by a Samsung-built Exynos 9110 CPU paired with a Cortex-M33 co-processor. Additionally, the Google Pixel Watch will have a 2GB RAM and 32GB of storage which sets a different tone for wearables.

Google has equipped the watch with 294 mAH battery and claims the Pixel Watch is able to go up to 24 hours of use. It charges via a magnetic charging puck and will charge the Pixel Watch from empty to 50 percent in just half an hour with a full charge taking until about an hour and 20 minutes. The Google Pixel Watch comes in either Bluetooth or Wi-Fi only or LTE-enabled configurations. Google claims that the LTE ersion is compatible with Google Fi and won’t require additional costs to use on most Fi plans.

The Google Pixel Watch is available for pre-order starting today in the US retailing for USD 350 for the Wi-Fi/Bluetooth model, and USD 400 for the LTE version.