In addition to the new MRT-3 Express Train scheme, the Land Transportation Franchising and Regulatory Board, in partnership with LTO and DOTC, is also testing out a new way ease up overcrowding during peak hours through Articulated Buses. 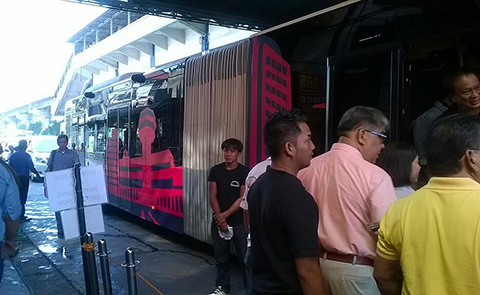 Manufactured by MAN, the articulated bus comprise of two sections which is linked together by pivoting joint. According to DOTC, the vehicle has a seating capacity of 100, but can easily accommodate up to 150 passengers in one go.

According to LTFRB Chairman Winston Ginez the dry-run, which started today and will end on the May 20, will determine the viability of the articulated bus as a means to reduce the number of passengers riding the MRT on a daily basis while waiting for the upcoming trains. 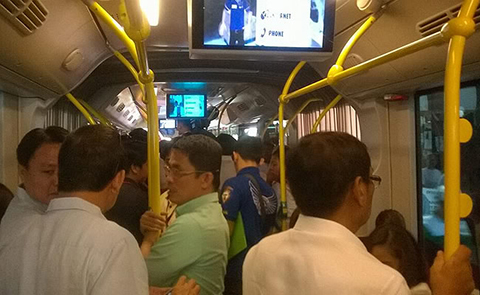 During the first week of the pilot-testing period, the Articulated Bus will pick up southbound passengers at MRT North EDSA from 7am – 9am and will only have three stops (Buendia, Ayala and Taft Avenue station) to drop passengers off before ending its route near NAIA Terminal 2. On its second week, the vehicle will pick up northbound passengers from 5pm to 7pm.

In line with this trial run, Alberto “Bert” Lina the owner of Air21, has already expressed his intent to invest Php200 million to purchase up to ten articulated buses in the coming months if these test runs yield good results. The government will, of course, regulate the fare if these articulated buses goes operational, but Lina stated that the fare should at least be around Php20 to Php25 to make it viable.

Stop renewing private bus franchises and let the government handle all public transpo. That way we can have a unified system with schedules and centralized payments!

When I was in the New Jersey, they have a Bus Schedule that they follow. Buses will arrive at a bus stop every 10 minutes or so. Port Authority in NYC (which doubles as a Police Station), has a centralized ticketing system. In our country, the impression that “I’m waiting to jump off a 30 story building”, signifies that were waiting for oblivion to happen. IMO, Filipinos are not good at positive reinforcement. “Kaya mo yan” doesn’t have much impact; “You can do it” has it all. My point, these buses are only effective in “Rich” cities such as: Makati or Taguig. Deploy these things in Manila, then I have sealed my own coffin with these “Articulated Buses”!

If this isn’t going to displace any of the regular fleet of buses plying on EDSA, then this will only ADD FURTHER to the traffic congestion.

i think double-decker buses are more appropriate for EDSA. Articulated buses need dedicated lanes to be effective, which obviously is hard to implement without strong opposition from the car-owning class.

LTFRB should cancel all bus franchises that run along EDSA and replace them will double decker buses. This will double the capacity of public transport with the same road footprint.

Well thats wht they did sa bus A, Bus B and Bus C…yun lang, disiplina din, not only for the drivers but also to the commuters…kasi tamad din minsan lumakad mga commuters, gusto ang bus nasa tapat nila. Well I an guilty din naman.

I see you’re taking a hint from the bus rapid transit (BRT) systems abroad. I honestly believe that was the idea when they built the MRT. Notice the wide stairwells and spacious areas under each station? I think those were supposed to be bus stops.

Private business interest and general commuter laziness, combined with our simpleton government, doomed this bus rapid system from the get-go, though. Such a waste.

The government is not the simpletons here. It’s the moronic masses who voted them in are.

well I suggest wag nang i-subsidize ito ng government. Let the private company run this things. And I think the P25-P30 will be ok.

amen to that. taasan na pamasahe ng LRT and MRT!!!

Moron, non-jologs have car! Grow up will you?