The LTFRB has just posted on their Facebook page a press release stating that all Uber TNVS (transport network vehicle service) shall cease and desist their operations for one month, in an order dated August 14, 2017. The regulatory board has recommended that Uber give some financial assistance to its drivers during the suspension period as “an expression of good faith as their accredited peer-operators would have not suffered the current predicament were it not for the predatory actions of respondent Uber”, as quoted from the press release.

The LTFRB has given copies of the order to their own enforcers, MMDA, PNP-HPG, and LTO for the purposes of enforcement.

Update (as of 8/15/2017): In a facebook post by Uber, they have released a statement that its services and operations will be suspended starting 6 am today. They also said that they will be resolving the situation as soon as possible. 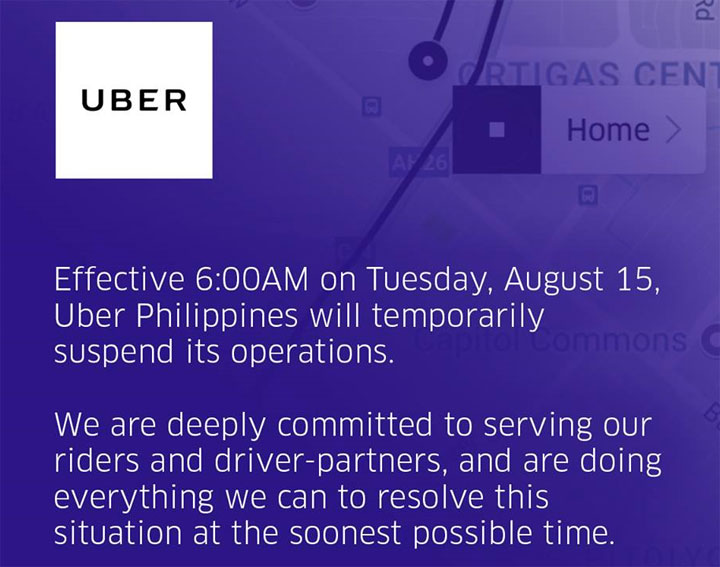 And oh yeah there’s grab, that cancels trips, drops your call or turn off their phones when they don’t like the destination. At this moment the public does not need another disabled transpo, why not just triple or quadruple the penalty? Or delay suspension when other transpo got better?

Timely. With MRT and LRT breaking down and taxis nowhere to be found.

And yet, this article doesn’t even clearly explain or mention the reason why was it suspended. That’s present-day journalism for you all.

Neither does LTFRB’s press release.